DOWNLOAD 14.89 MB
SUBSCRIBE
Mr Lee and his wife hoped to immigrate to Australia with their two daughters Source: supplied

Mother of two Evelin Guo was killed in a car accident in Darwin on Valentine's Day. Her family’s devastation has been compounded by the reality that they may now be deported as a result of her death.

The future remains uncertain for Darwin man Kevin Lee and his two children following the tragic death of his wife Evelin Guo.

Ms Guo was killed in a head-on collision as she drove to work on Valentine’s Day evening, an incident which also resulted in the death of a 20-year-old man driving the other vehicle.

Police from the Northern Territory's Major Crash Investigation Unit are investigating the circumstances of the crash.

Mr Lee says he is “devastated” by the loss of his wife and the mother of his children.

"I received a call from my wife's workplace at midnight, saying that she didn't show up,” he tells SBS Mandarin. “I was worried about what had happened." 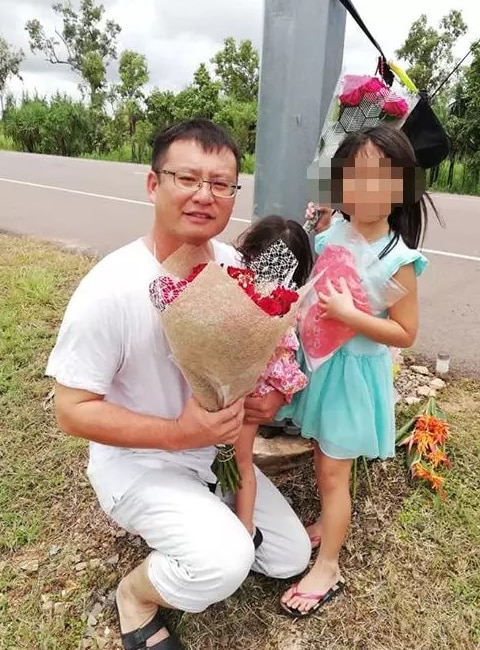 Mr Lee says he decided to jump in his car and follow his wife’s route to work before coming across the accident scene one kilometre from their home.

"The police told me the driver inside had died. But I wasn't sure if it was her without seeing the number plate and until the police checked the information with me."

Weeks on from the tragedy, Mr Lee says his family’s devastation is compounded by the reality that they are now facing deportation as a result of her death. Ms Guo was killed in a car accident in Palmerston, Darwin.
Supplied

Ms Guo, who was a nurse at an aged-care facility, applied for Skilled Regional 489 Visa in October as the main applicant for the whole family.

It was expected that the application process would be completed by May, meaning the family was on track to receive permanent residency. The application has since been suspended following her death.

“In order to meet the application requirement of 30 to 40 hours per week for half a year, my wife had to do two part-time jobs at the same time,” Mr Lee says.

“It was very common for her to have a day shift immediately after a night shift. Meanwhile, we also have two young kids to take care of at home." Efforts are now underway to reignite the family’s bid to stay in the country.

"The CEO of a Northern Territory Immigration Association called and we discussed if there are other ways to apply for a visa,” says Mr Lee, a fence builder by trade.

"I once learned welding in Taiwan which is included in my current work content. So, it may be possible for me to apply for a skilled employer-sponsored regional visa. My employer is willing to help me."

Mr Lee says he has a lot of work to do before he can apply.

He says after his employer is assessed in an immigration office review, he must then submit a new visa application before August when his wife’s 485 Temporary Graduate Visa expires.

In addition to this, he was also trying to provide support to his two daughters, aged six and two.

"My two-year-old seems to know a little about it. She's very noisy these days and wants to go out to look for her mother.

"I tell my six-year-old daughter that your mother has become an angel and will protect you until you grow up."

Mr Lee, who is from Taiwan, says he fell in love with his Hong Konger wife in 2009 while they were in Australia on working holiday visas.

After their visas expired, they returned back to their homes separately before marrying in 2012.

In that same year they returned to Australia, but this time they hoped to make it a permanent move.

"My wife hoped to be a nurse. She first studied in TAFE and then applied for a nursing major at Murdoch University.

"The week before the birth of our first daughter she was still preparing for the exam. After our child was born, she had to look after the child while studying."

Following her graduation, Mr Lee says the family moved to Darwin because nursing jobs in Perth were hard to find at the time.

A community GoFundMe page has been set up to assist Mr Lee with living expenses as he attempts to stay in the country.