The Taiwanese Australian director of the four-part historical drama set on the Victorian goldfields wants Australia's textbooks to be rewritten to portray Chinese miners not as victims, but as heroes.

It’s 1857 and tensions between rival camps are running high on the Victorian goldfields.

The head of a Chinese miners' group discovers a white woman’s body outside their camp and as a result, a conflict is on the verge of breaking out.

The director of the new SBS four-part series New Gold Mountain Corrie Chen capitalises on this scene to paint a picture of the tensions between European, Chinese and First Nations groups at this crossroad of Australian history.

Ms Chen says stories of Chinese miners during the Australian gold rush have long been told, but rarely from a Chinese perspective.

So when the opportunity came up to direct the historical drama, she admits it felt like a “dream come true”.

Whisky and pizza vs rice wine and rice

In the early 1850s, large deposits of gold were discovered in Ballarat.

When word got out, tens of thousands of migrant miners flocked to the Victorian goldfields in the hope to find buried treasure. 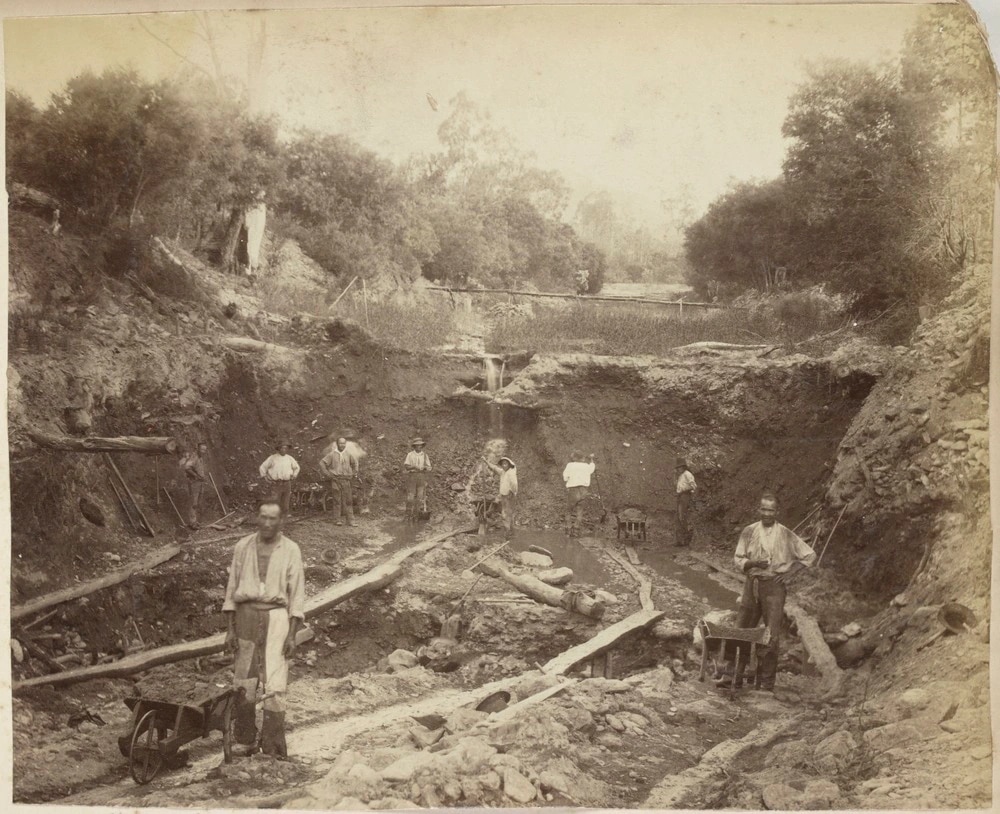 Longing for a better life, Chinese miners made their way to the Melbourne region, which they referred to as New Gold Mountain, named after Old Gold Mountain, an earlier goldrush in California in the late 1840s.

“The use of New Gold Mountain is obviously the direct translation of the Chinese title. I think it has a contradiction and dichotomy of feeling just enough like 'Chinglish', but also capturing the ambition and volatile nature of [people at] that time,” says Ms Chen.

According to the vice president of the Chinese Australian Cultural Society in Ballarat Charles Zhang, towards the end of the 1850s, Chinese people in Ballarat accounted for a quarter of the local population. “Among miners only, a third of them were Chinese,” he adds.

During the gold rush era differences between culture and food highlighted the divide between European and Chinese groups, he says.

By the end of the gold rush in 1914, some Chinese people returned to China while others settled in Australia. Chinese vegetable farmers in Victoria in 1901.
State Library of Victoria

Mr Zhang says the most outstanding contribution they had on society was their influence on agriculture.

The Chinese were mainly from Siyi in Guangdong [province]. They were very skilled in agricultural technology and used more advanced planting methods than the locals.

“They brought green vegetables in Australia. Ninety-nine per cent of the fruit and vegetable farming industry was operated by the Chinese at the time. Then in the 1930s, Chinese people had to withdraw from this industry due to the White Australian policy,” he says.

Although this also meant that non-white migrants were deported from Australia, their legacy continues to this day.

Mr Zhang says the Chinese people left behind temples, gardens and their Eastern way of life. ‘The Chinese are not passersby’

Ms Chen says attitudes towards Chinese people have not changed.

“I think what was quite revealing to me, doing the research for this show, is how much everything feels exactly the same, in how the Chinese are spoken about and treated at that time,” she says.

Ms Chen says one of the first conflicts between European miners and the Chinese in the series is over the poll tax every Chinese faced when they disembarked in Victoria.

That disempowerment and being at the mercy of white politicians, and feeling worthless of you  position in society, purely because you're Chinese, that's the sort of racism, I feel is reflected still in today's time.

“Even though Chinese people have been a part of Australian history since the 1800s, we are still invisible and still spoken of as if we're a temporary group of people that are just passing through Australia for an education and leaving,” she adds. Ms Chen says she wants the rest of Australia to change the way they look at Chinese people.

“They were the heroes and not the victims, and I wanted to really reclaim the image of what it meant to be Chinese in the Australian landscape and to not be disempowered in the sketches that I saw in history books growing up,” she says.

Ms Chen grew up in Australia in the 1990s when she says Pauline Hanson’s One Nation far-right party became the political mainstream responsible for normalising xenophobia and racism.

“I quickly learned that as an Asian in Australia, you were powerless and you didn’t have a voice,” she says. The 30-year-old says she used to deliberately avoid making friends with other Asians as a self-protection measure, believing that as long as she was surrounded by Anglo friends, she wouldn’t be the target of racial discrimination.

It wasn’t until she was in her mid-20s she realised she had been accepting negative society beliefs and stereotypes about her race, otherwise known as "internalised racism".

Ms Chen remembers being told as a child by her parents to “integrate into the Australian environment” and to read more English books. “It's really a sense of shame that I've had to really unpick, even now. I'm in my 30s now and I think of that time and wonder how that could have been done differently,” she says.

Ms Chen says over recent years she has seen many positive changes, particularly in the film and television industry.

We've got Chinese people entering not just as writers or directors or producers, but at the executive and gatekeeper level. It really is something that's going to have to take a combined effort for things to change.

Ms Chen says the feat gives her inspiration but doubles up as added pressure.

“That's the annoying thing about successful Asian Americans,” she says after her parents encouraged her to study at New York University upon reading the news.

“Because my parents are like, ‘oh, you can just win an Oscar next, why aren't you doing that?’ So, nothing until then will satisfy them,” she says with a grin.