What Chinese students think of Australian university centres in China

International students who are unable to enter Australia describe what it's like learning at centres set up in China by their Australian universities.

As university semesters begin across Australia, international students are starting their courses at learning centres in China, set up in response to the continuing enforcement of the country’s international border closure.

Dr Wanling Qu from the University of Technology Sydney (UTS) has been working around the clock since March when the impacts of the COVID-19 pandemic were becoming clearer.

In her role as the university’s in-country Director of China, she has been at the coalface of ongoing efforts to set up study options for students amid border restrictions imposed by the federal government.

”These tasks didn't exist before and were not part of our work. After the pandemic came, our work increased suddenly,” she tells SBS Mandarin.

According to Universities Australia, the peak body for the sector, more than 140,000 higher education international students were unable to study domestically in 2020 after the country closed its borders.

The petition has received more than 15,000 signatures.

Thousands of international students are still locked out of Australia.
Saeed Khan/AFP

Studying online at a Chinese campus

A number of Australian universities are offering the option for students to study in multiple cities across China, within existing Chinese university campuses.

UTS operates four Offshore Learning Centres in China, at Hebei, Chongqing, Tianmuhu and Jiangyin, while one centre has also been set up in Vietnam.

At these centres, Chinese students who had been accepted to study in Australia are given the option to continue their degrees.

At these centres, students have access to most of the campus facilities including accommodation, cafeterias and gyms. However, the courses themselves are taught online by UTS staff members based in Sydney.

"Our students are treated as if they’re students at our partner universities in China," Dr Qu says.

“They're given a campus card that can access all facilities like gyms, stadiums and libraries. They can have it all." One of the UWA Learning Centres in China.
Wenjing Zhang

The University of Western Australia (UWA) was one of the first from the Group of Eight Universities to establish overseas study centres in China and has campuses in Nanjing, Harbin, Chongqing and Suzhou.

UWA Deputy Vice-Chancellor Tayyeb Shah tells SBS Mandarin, "It is through UWA's strong collaboration and partnerships with universities in China, that these dedicated learning centres were made available for students enrolled at UWA."

As well as having online support from the Australian-based campuses, Mr Shah says students benefit from face-to-face advice from lecturers at the Chinese universities.

"Until students can travel to Perth again, the UWA Learning Centres provide the experience of studying in a university campus environment,” Mr Shah says. 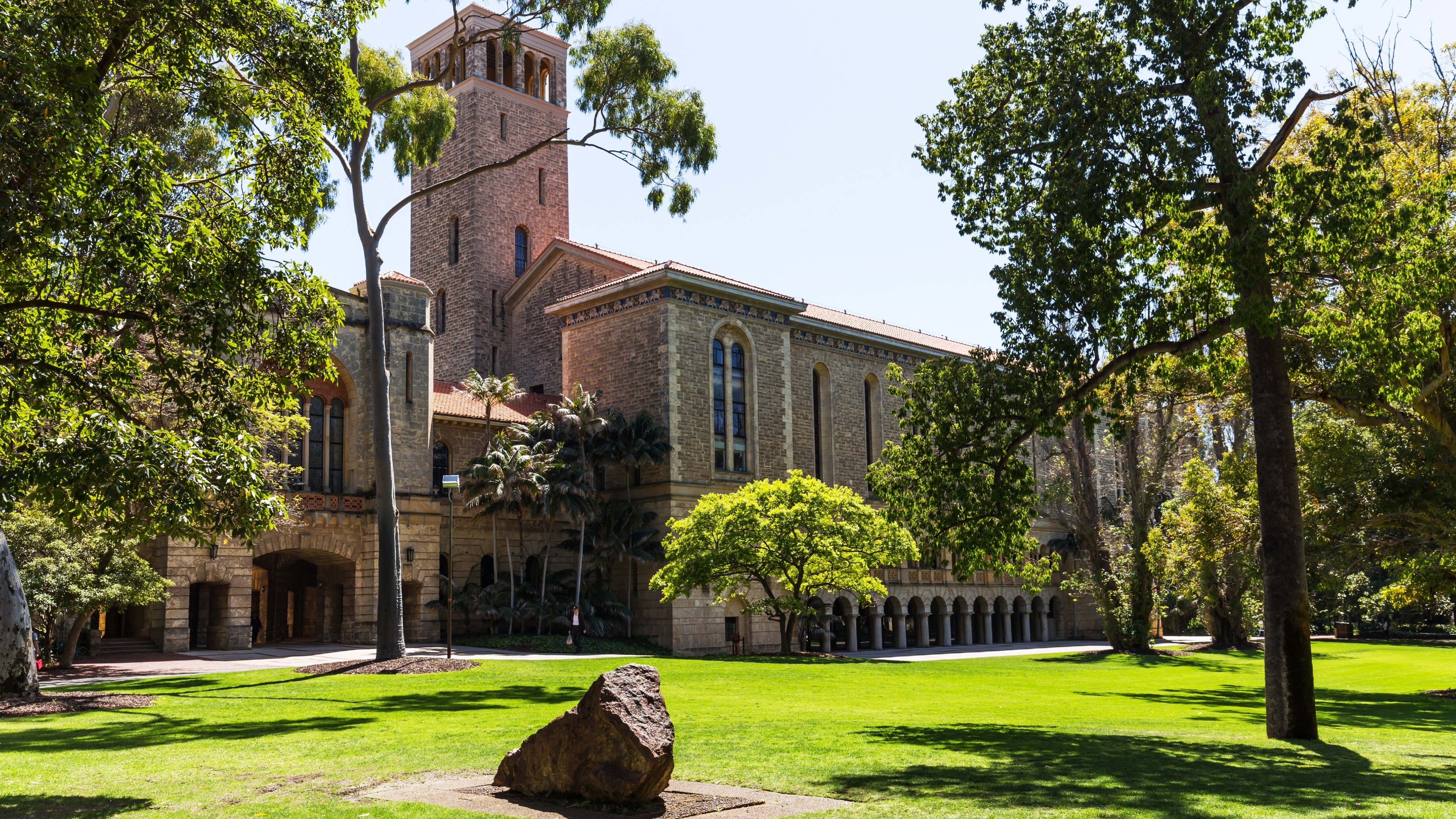 The University of Western Australia campus in Perth.
Getty Images/Nuwan

Hang Sheng is finishing his bachelor’s degree at a UTS learning centre at the Nanjing University of Aeronautics and Astronautics at Tianmuhu, Jiangsu Province.

He says the best part about continuing his studies at the campus is the interaction with students studying the same course.

"Students from the same school are usually assigned to one dormitory, so we can discuss face-to-face and ask senior peers for advice such as how to choose courses and so on, which is very helpful to our studies,” Sheng says. However, he says he "misses Sydney, the Australian lifestyle and the friends he made from different backgrounds and cultures".

Wenjing Zhang is also at the Nanjing University of Aeronautics and Astronautics, but part of a UWA Learning Centre.

It’s not the first time she’s been based at a Chinese university. She moved to Perth to embark on her masters after completing her bachelor's degree in China.

She is happy with the arrangement at the centre.

"I was living in a studio in Australia, and I was all alone.

“Now I share a dormitory with three other students. It feels like I'm back to my old Chinese university life.”

The students she shares her dorm with have never been to Australia due to the border closure, and Zhang is encouraging them to experience Perth when they have the chance.

"Since we chose to study abroad, it's better to experience life in the other country, because the lifestyle is very different from here," she says.

“So, if they have the chance they should go and experience it.” Student activities at one of the UTS Offshore Learning Centres in China.
University of Technology Sydney

Next semester, Zhang plans to enrol in a new Australian centre set up at the Soochow University in Suzhou, which is closer to her hometown, to finish her master’s degree before seeking work in China.

He was due to fly to Sydney last February to begin his master's, but his flight was cancelled, forcing him to study online from home.

He’s now finishing his second semester at the Nanjing University of Science and Technology in Jiangyin.

He says it "feels very different” to go back to a Chinese campus to receive an international education but believes the learning centre is very helpful to keep him on track.

"It's only been about two months since I came here. I now have better routines and much more discipline compared to studying alone at home."

He also enjoys engaging with other students during activities on campus.

'They really gave their hearts'

Yan Chen graduated from UTS in 2019, and she currently works in a new advisory role created by the university to help international students after the pandemic hit.

She says the centres are a better option than studying from home, especially for new students.

"Having been a first-year myself, I know this could be very confusing," she says.

"It's nice to be with your classmates at this time and have senior students around to help you. They have had experience studying abroad, and they would love to help you."

The success of the learning centres has encouraged other Australian universities to follow suit, Dr Qu says, affirming that more centres are planned for this year.

"From what I know, Australian universities are very enthusiastic about setting up overseas learning centres."

She is proud of the work UTS is doing to support international students despite the challenges posed by the pandemic.

"In a situation like this, we are facing loss, but we still made such an effort.”

I was impressed by the support from all the people involved. They really gave their hearts.

Mr Shah agrees that the project has been worthwhile for UWA.

“Overall, UWA students in China have adapted well to the transition of online learning brought on by the COVID-19 pandemic, and the university has done extensive testing to validate the performance of its online learning platforms with students currently in China.

“We miss our international students and look forward to welcoming them back to campus soon.”