Fresh from the biggest win of her career, the Asian-food loving Hong Kong Australian tennis player wants the world to know she’s ready to rise up the ranks and take down top players along the way.

The biggest win of Priscilla Hon’s career was well timed.

Days after defeating two-time Wimbledon champion Petra Kvitová in the Adelaide International last week, Hon was awarded the last of eight wildcard entries into the single’s draw of the Australian Open, which kicks off on January 17.

The 23-year-old from Brisbane says her current ranking of world No. 223 doesn’t reflect the level she is playing at. Hon has been ranked as high as world No. 118 but slipped down the ranks due to injuries last year. Priscilla Hon in practice at Melbourne Park this week ahead of the Australian Open.
Tania Lee

Hon says not only has she been working hard on the court, training six days a week when not travelling for tournaments, but off court too.

She says sessions with a sports psychologist in the past year have paid off.

“For a while I had this in my head where the top 20 were just so much better and whenever I would get close to beating anyone in that top 20 I would stress out and almost believe it’s not happening. So I think getting over that hurdle is just huge for me.”

Hon made her grand slam debut at the Australian Open 2015 after picking up her racquet at age five thanks to her father who played in tennis fixtures on the weekends.

The former No. 13 ranked junior says it was just as well she was a sporty child because she was her father’s last hope of being born a boy.

Hon has two older sisters, Hannah and Joannah, who were born in Hong Kong.

Canada would have been Hon’s parent’s choice of permanent residence had they not had such a good time during a holiday prior to their move Down Under in 1994.

Hon says the decision has been fortuitous as Australia afforded the time and space for her to pick up “every single sport possible” including touch rugby, sprinting and swimming, which she crammed into a packed schedule.

“Of course, we went to Chinese class. I went to Kumon and all did those Asian [activities],”

“And I did piano. Hated it,” she laughs.

Known as “Pri” to those close to her, Hon spends eight to nine months of the year travelling for tournaments. 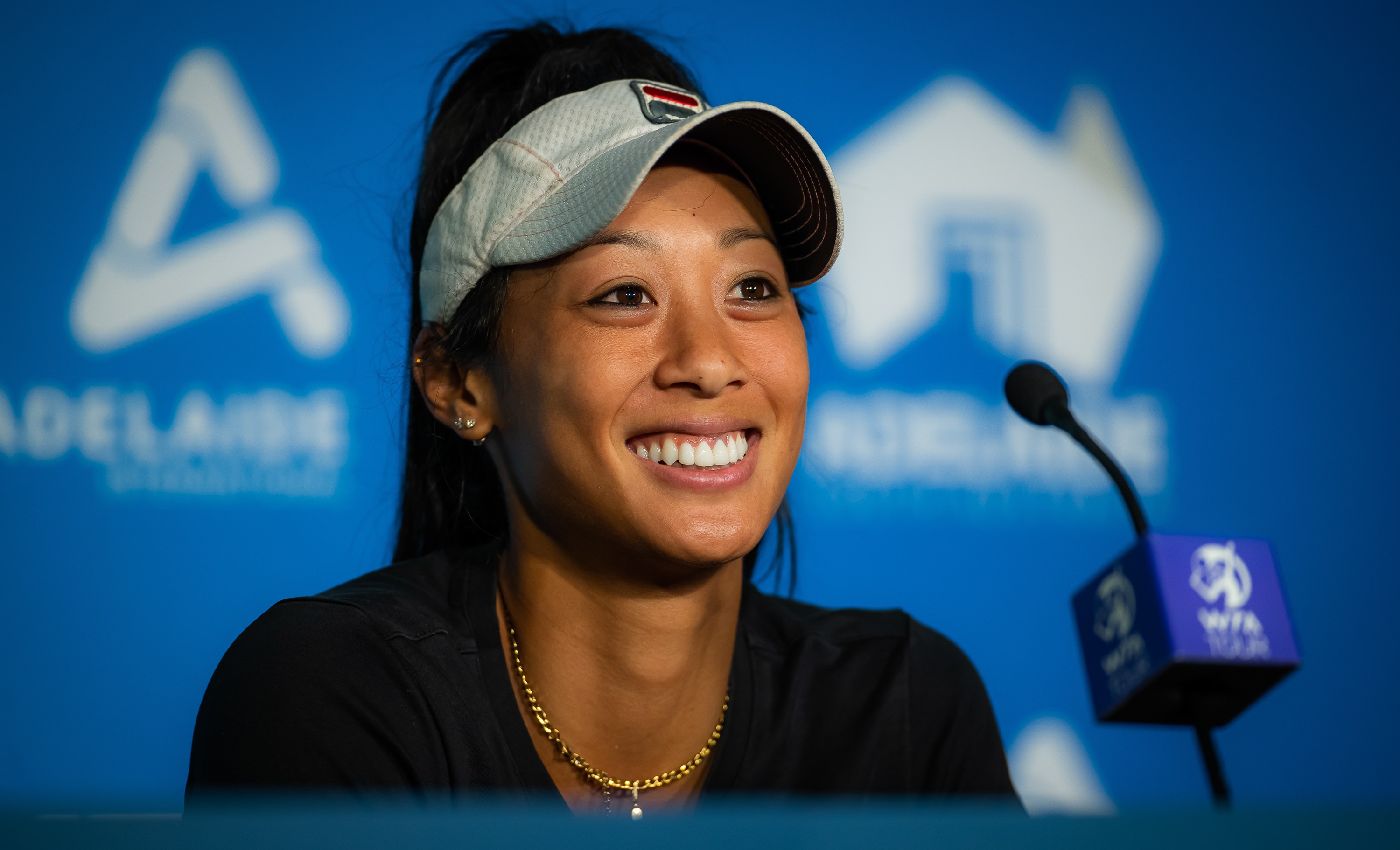 Priscilla Hon talking to the media after taking down Petra Kvitová in three sets at the Adelaide International.
Rob Prange / IPA/Sipa USA

But home in Brisbane is where she says she can relax and enjoy Sunday night Asian feasts with her family.

“I eat Asian about 90 per cent of the time,” she confesses, “We would have two-minute noodles for breakfast.”

Hon says most of her family live in Hong Kong – a city she counts as her favourite in the world.

“[The] food is the best. I love the city. It’s super fun. And obviously having my family there. It’s always nice to go back and see everyone.”

“I’d get red envelopes [of money] from my grandparents. So that was always really exciting.”

Hon admits it’s been difficult watching the city from afar since the aftermath of the 2019 mass protests demonstrating against plans to allow extradition to mainland China.

“It’s really sad because obviously I know quite a few people there. It’s sad to see where it’s going but you can’t really do anything about it.” 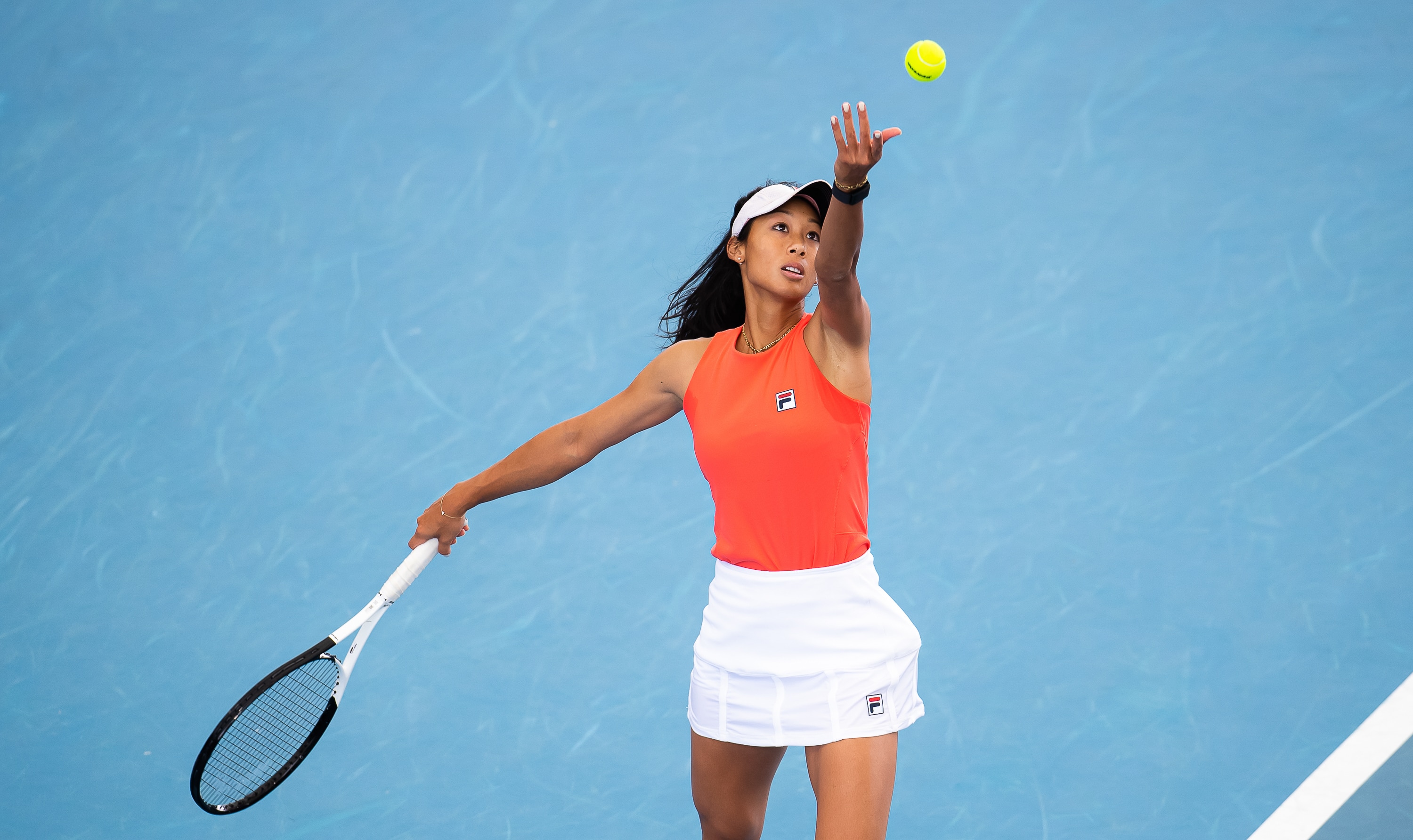 Hon in action during her second round loss against Victoria Azarenka of Belarus at the this year's Adelaide International.
Rob Prange / IPA/Sipa USA

“But hopefully a lot of the young Hong Kong people can come to Australia and start a new life.”

The conversational Cantonese speaker says she hasn’t been able to travel to Hong Kong due to COVID and the territory’s strict quarantine rules.

As a double-vaxxed, soon-to-be triple-vaxxed tennis player, Hon also admits she feels uncomfortable playing in a tournament with unvaccinated players.

Earlier this week, she says she was sharing the player’s gym with world No. 1 Novak Djokovic, a prominent vaccination sceptic.

“We all have choices. I’d rather be vaccinated and other people too but I understand why it’s frustrating for Melbourne people and Australians because we’ve gone through quite a lot.”

Hon says she uses masks and regularly sanitises her hands to protect herself from COVID-19. 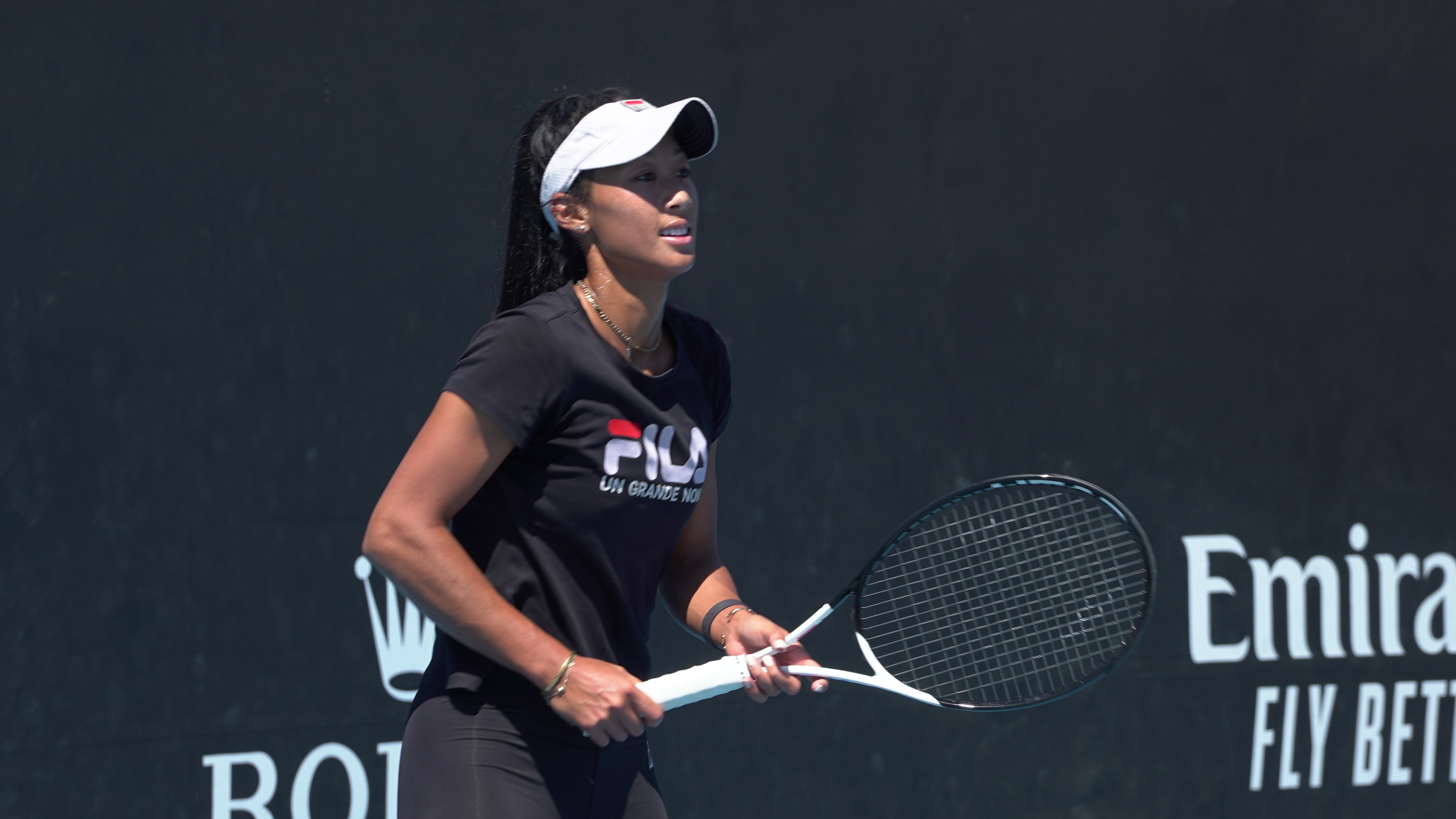 Hon says she is proud of her Hong Kong heritage.
Tania Lee

“It’s Djokovic. He is going to do what he wants anyway. But I would rather him be vaccinated.”

Politics, legalities and bureaucracy aside, Hon counts Roger Federer and Justine Henin as her tennis idols.

She says she revels in the opportunity to play higher-ranked players on show courts and hopes local and Hong Kong fans can get behind her, even if she’s kicking off her Australian Open campaign on an outside court.

“It’s fine when there are people here and watching but when there’s maybe six people, it’s hard... it’s obvious that you have to fight foryourself but it helps having support to push you through.”

Hon’s best result at Melbourne Park was a second-round showing in 2020 from three former appearances.

“The goal is to win three rounds here. That’s my goal.”

Hon will square off with Czech Republic’s Markéta Vondroušová in the first round.

*Hon's current world ranking is No. 223. An earlier version of this article mentioned she was world No. 263.