Exclusive: Data obtained by SBS Cantonese under the Freedom of Information Act has revealed that the number of applications for Australian permanent residency lodged by Hong Kong residents has risen by more than 50 per cent compared to last year.

The spike comes amid the rise in the number of certificates of no criminal conviction (CNCC) being issued by Hong Kong police since the anti-extradition bill movement broke out in the city in June 2019.

Hong Kongers are required to provide the certificate when applying for permanent visas overseas, including Australia.

Migration agents and educational consultants have also seen an increase in inquiries since the Chinese government implemented the national security law in Hong Kong in June 2020, according to The Sydney Morning Herald.

SBS News: We asked how many Hongkongers seek asylum in Australia. This is what we found

The introduction of security law resulted in a strong rebuke by Australian Prime Minister Scott Morrison who announced that graduate visa and temporary work visa holders from Hong Kong would be allowed to stay an additional five years with a pathway to permanent residency at the end of that period.

Figures obtained by SBS as part of the Freedom of Information Act (FOI) showed that 7,264 permanent visa applications were lodged by Hong Kong residents between July 1, 2019, and April 30, 2020, which marked a rise of more than 50 per cent compared to the same time during the previous year. 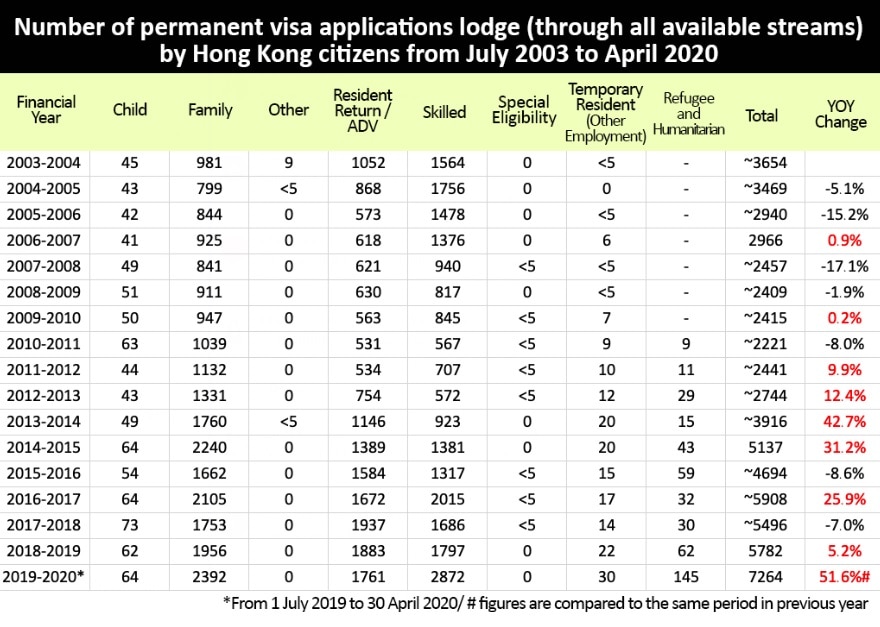 A chart provided by the Department of Home Affairs.
Supplied

As part of the FOI process, SBS requested migration data going back to Hong Kong’s handover on July 1, 1997 but was informed by the Department of Home Affairs that data could only be provided from 2003.

During the ten-month period up to April 2020, the number of applications for skilled migration visas, family-sponsored visas and asylum claims also peaked.

Asylum and refugee claims from Hong Kong increased by 179 per cent to 145 during that period.

There were 2,872 applications lodged for skilled migration visas, compared to 1,797 the previous year. 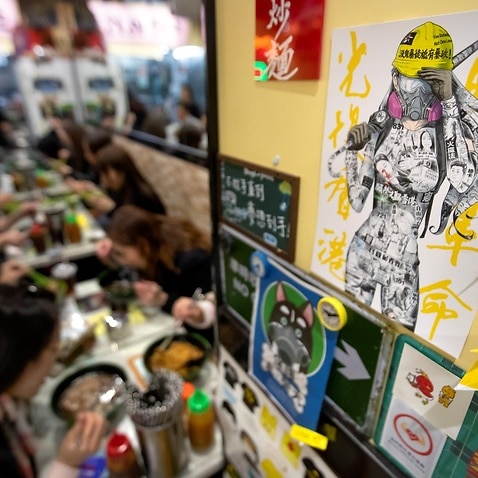 In analysing the data, the migration pattern from Hong Kong since 2003 can be separated into three stages with two significant turning points – the period around 2011 and 2012, and during the anti-extradition bill movement which began in 2019.

In five of the eight years from 2003 to 2011, the number of migration visa applications from Hong Kong either dropped drastically or increased by less than 1 per cent.

Stage one: Using the 2003-04 total of 3,654 as a base, migration visa applications fell during the following year, which coincided with when Hong Kong’s second Chief Executive Donald Tsang took office. Stage 3: The most significant turning point was following the outbreak of the anti-extradition bill movement, which saw mass protests and violence between demonstrators and police. This resulted in 7,264 applications for Australian permanent visas being lodged over a 10-month period up to April 2020, an increase of 51.6 per cent from the same time the year before. Hong Kongers have lost confidence in ‘One Country Two Systems’

Ngok Ma, Associate Professor of the Department of Government and Public Administration at the Chinese University of Hong Kong, believes the outflow of Hong Kongers suggests that they have "lost confidence" in the ‘One Country, Two Systems’ principle and also in the freedoms and autonomy the city once enjoyed.

He said the situation has been exacerbated since 2012, encompassing the ‘Umbrella Revolution’ protests in 2014 and the anti-extradition bill movement last year.

“[The migration of Hong Kongers] reflects at a certain level China’s policies and attitude towards Hong Kong.

“This affects the Hong Kong people’s perspective of the 'One Country, Two Systems' principle. Many feel that Hong Kong’s autonomy and freedom have been undermined. 2012 is a turning point where CY Leung and Xi Jinping both took office. China implemented tougher policies on Hong Kong which drove people away.” Riot police during a protest to mark the one-year anniversary of the subway attack at a shopping mall in Hong Kong.
AAP

Mr Ma believes that the pro-democracy movement in 2019 and 2020 made Hong Kongers feel a stronger urge to migrate due to social unrest, a lack of trust in the government, and pessimistic future prospects.

“Now is when people have the strongest sense of leaving since 1997. Back in 2012 and 2013, some would discuss the idea but rarely acted on it. But now more are sending their children to study abroad and telling them not to return.”

He believes that more Hong Kongers will migrate overseas and choose their destinations based on the immigration policies of each country. He believes the older generation in Hong Kong would prefer moving to the United Kingdom because they likely hold British National (Overseas) passports.

He said Australia is also a popular English-speaking destination because of its large Hong Kong Australian community and liveability.

SBS Cantonese has contacted the Ministry of Foreign Affairs of China and the Hong Kong Chief Executive’s Office for comment.

‘It’s only about surviving in Hong Kong’

Edith Lui, a 23-year-old nursing graduate from the Queensland University of Technology completed her studies in 2019 and applied for a permanent visa in March 2020.

She first considered settling in Australia when she arrived to study because she could hardly afford to live in Hong Kong. And the prospect of facing the immense work pressure as a health professional in Hong Kong was too daunting.

“It’s only about surviving in Hong Kong. There is no enjoying life,” she said.

The social unrest brought by the anti-extradition bill movement solidified her decision to leave Hong Kong.

She does not consider herself apathetic in politics but doesn't believe she has the ability to make changes in society.

“Nothing would change because of my return. I will not run for the legislative council. Even if I succeed, there isn’t much I can do.”

Lui says that her long-term plan is to settle in Australia permanently and visit her parents in Hong Kong occasionally. She says it is sad that she can no longer live where she was born and raised.

“All my memories growing up come from Hong Kong. I can’t find any sights in Australia that are reminiscent of my childhood.”