Coming Up Thu 9:00 AM  AEST
Coming Up Live in
Live
Cantonese radio
More

A group of small business owners are calling for the immediate removal of “funeral-esque” Lunar New Year lanterns and “urn-like” pavement decals in Sydney’s Chinatown, complaining that it mocks an already struggling precinct.

In an open letter, the newly formed focus group say they are “shocked and disappointed” by the artwork’s blue and white palette, inauspicious colours that symbolise death, illness and funerals in traditional Chinese culture.

Owner of Shum’s Watches and Jewellery on Sussex Street Elsa Shum said traders who have already been severely battered by the low economic activity in Chinatown are “deeply offended” by the reminder of “death” in the artwork commissioned by the City of Sydney council. Ms Shum told SBS Chinese that she had hoped to usher in Year of the Tiger with luck and good fortune, only to feel “depressed” by the artwork’s “curse-like” design.

The Chinese Australian behind the artwork, Susan Chen, posted on her Instagram last Wednesday that she was frustrated by the “small-mindedness” of a conservative generation that young Chinese Australians had hoped to “look up to for support and guidance”.

“We don’t accept this attitude,” said Ms Shum, who added older Chinese community members feel the responsibility to pass on their cultural understandings to younger generations.

An artist needs to create work based on deep cultural understandings if they are to be considered a real artist.

SBS Chinese spoke to the artist on the phone who said she had nothing to add on the matter.

Ms Chen was meant to talk about her work on display at a Sydney library event on Thursday. It appears she is no longer part of its line-up. 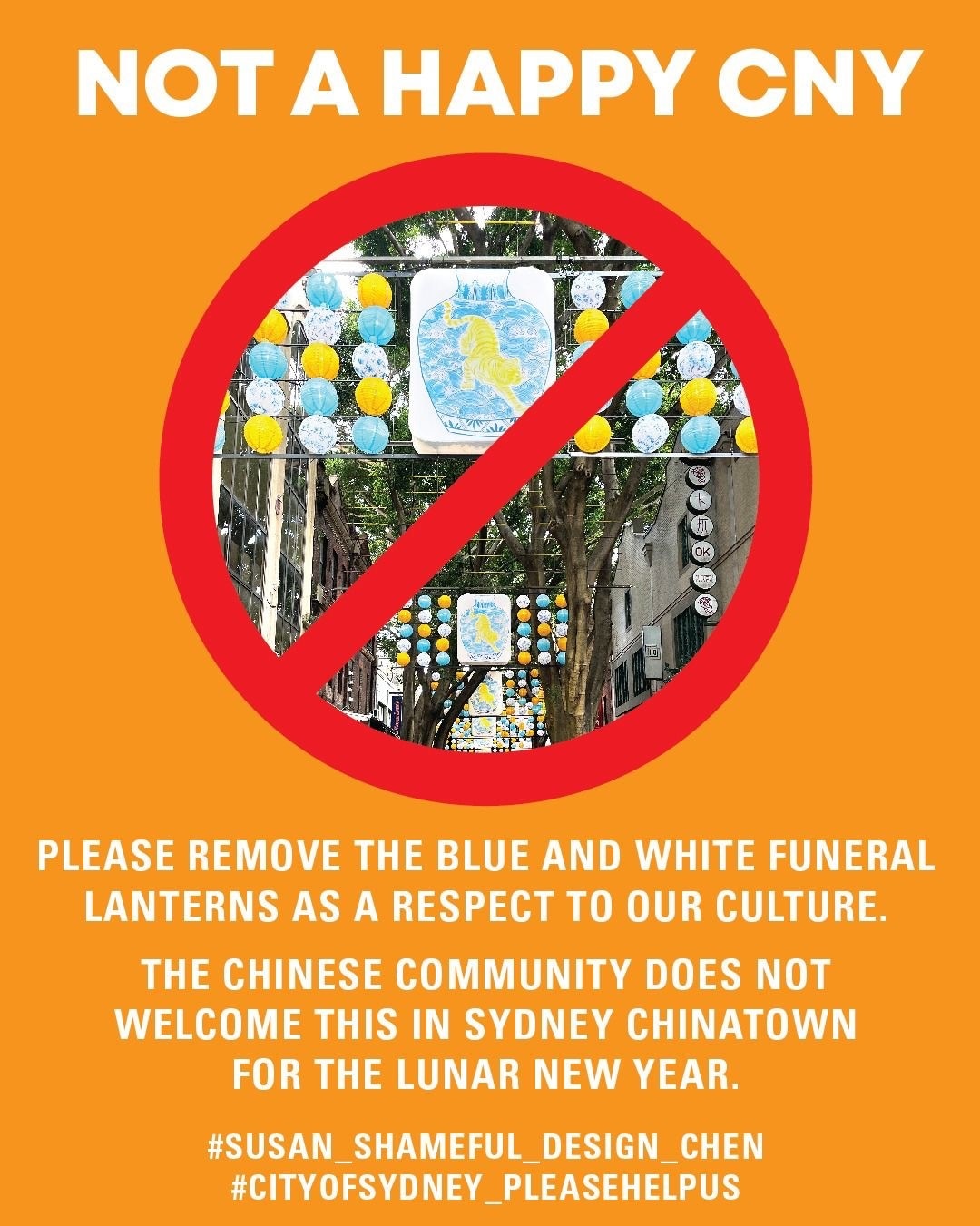 Local merchants from the focus group questioned why council did not notify them before the artwork was installed on January 29.

They also wanted to know why council chose to consult instead with the Korean and Thai consulates, as well as with the Haymarket Chamber of Commerce who the focus group say “don’t represent a majority of Chinatown’s business owners”.

“How does something that happens in Chinatown involve the Korean consulate? Koreans prefer the colour white. Whenever they hand out lucky envelopes, they use a white packet,” Ms Shum said.

The City of Sydney said they consulted widely including with Chinatown and Haymarket businesses, as well as with the China Cultural Centre in Sydney, who reviewed the artwork and raised no concerns over its blue and white colour palette.

“The city has received positive feedback from local community representatives who have welcomed the modern art installation,” said a City of Sydney spokesperson.

Foot traffic data shows that 71,600 people have visited Dixon Street since the launch of the City of Sydney’s 16-day Lunar festival celebrations.

“[The colour of the installation] looks refreshing and the tone is cool to me. Red and yellow is outdated,” said a supporter of the artist on Facebook Angus Chang.

“Come on, it’s pretty! Why someone are [sic] so easy to be offended?” asked fellow supporter Amanda Ngai.

“We are not criticising the artist. If it was an art exhibition, I’d think that the artwork is good. But this is Chinese New Year in Sydney’s Chinatown

“In Chinese, the long-standing customary and traditional colours are red and gold,” said Ms Sham-Ho, who remembers as a child white lanterns being placed on top of caskets at funerals in Hong Kong.

Darren Kwok, an architect with an office based in Chinatown, said he was invited to have his say on the artwork at a council-led roundtable in December as a member of community not-for-profit group Haymarket Institute.

As a creative person, when I design a building, I have a social responsibility [for it to be] contextually fit and culturally appropriate.

“I think this is probably an error and it could have been more appropriately handled," Mr Kwok said.

Second-generation Chinatown restauranteur Billy Wong, in his 30s and not involved in the focus group, said he believed the colours used to celebrate Lunar New Year should always be traditional colours – red and gold. 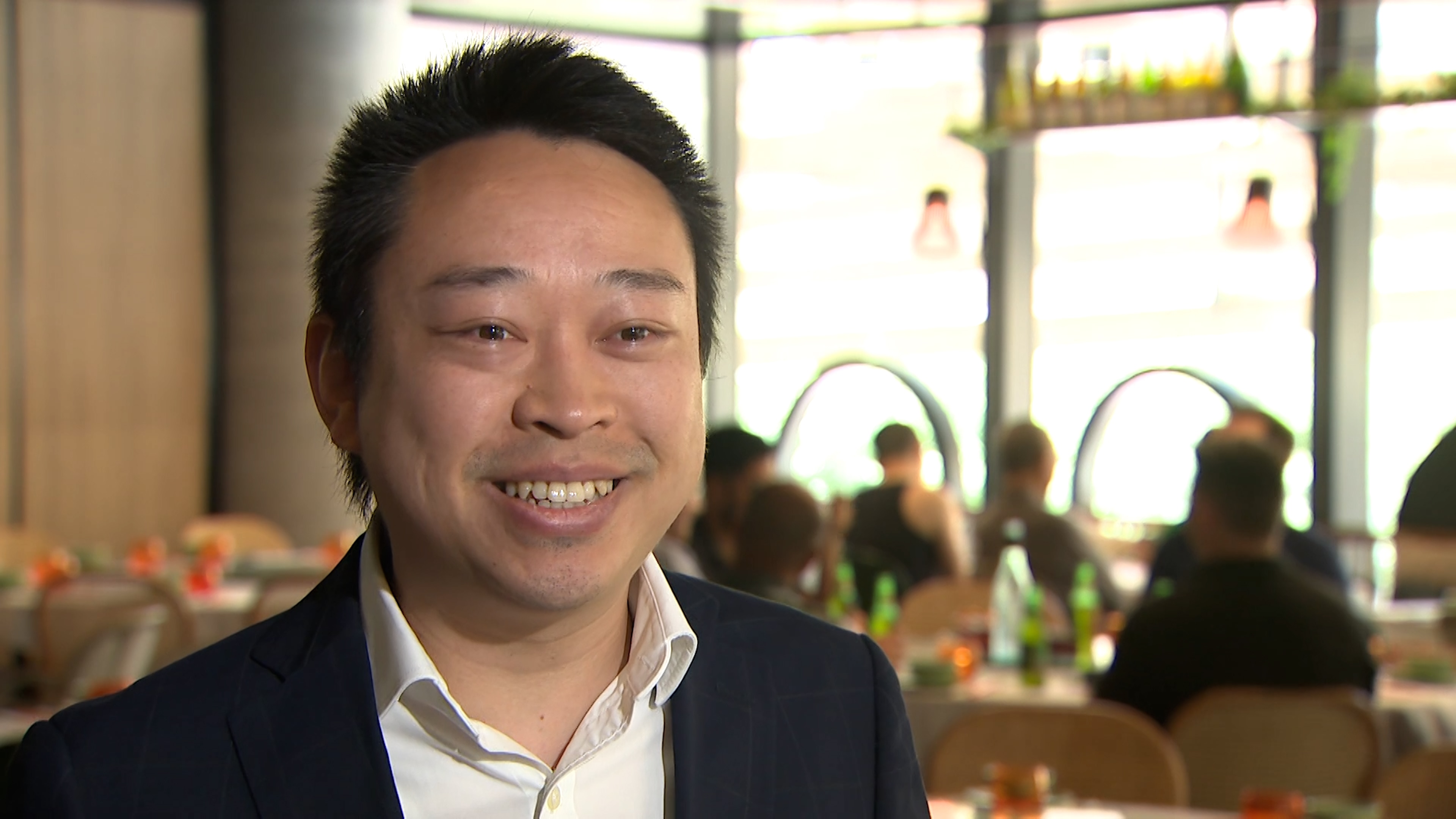 “There is cultural significance in the colours that we use to represent and celebrate Chinese New Year. It’s important to take that into account when choosing decorations,” said Mr Wong.

Sydney’s Chinatown is a popular landmark for anyone celebrating Lunar New Year. But in recent years, businesses in the area have been greatly impacted by the construction of the light rail and the pandemic.

“People who have heard of or are aware of these decorations that I know are purposely avoiding Chinatown,” Mr Wong added.

Last week the artist’s blue and white tree wraps were taken down after complaints made to long-standing Chinese Sydney city councillor Robert Kok.

Ms Shum-Ho said Mr Kok was unable to convince Lord Mayor Clover Moore to take down the blue and white lanterns and porcelain water vessel decals on the pavement at the same time. 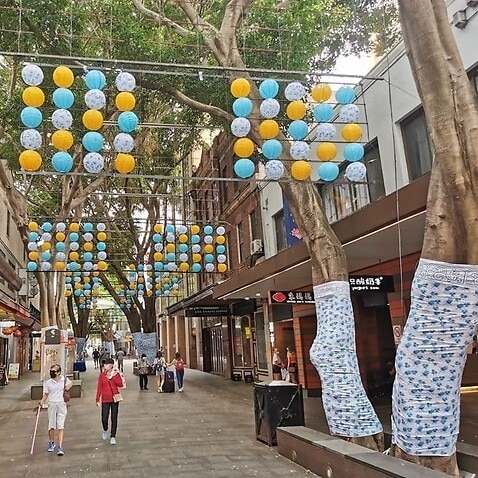 'Like a funeral': Anger over colours used to mark Lunar New Year in Sydney's Chinatown 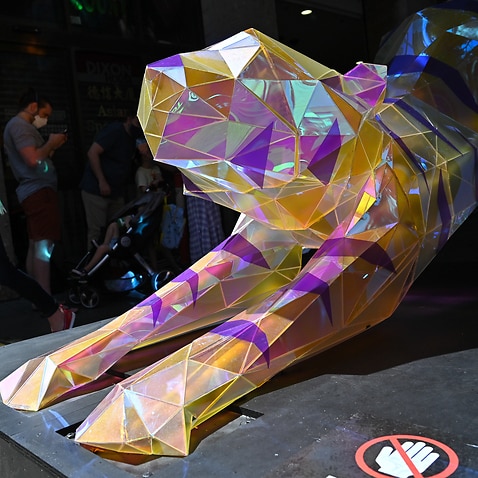 How much do you know about Lunar New Year? 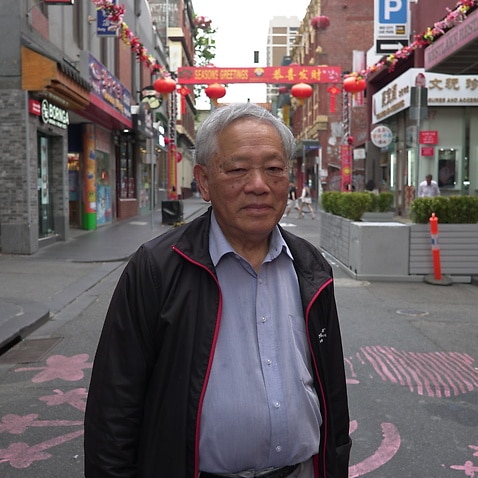 Will Chinatowns in Melbourne and Sydney make a comeback after big-name closures?