Cross country Olympic
Cameron Ivory (NSW) was the star Australian of the day, pushing hard in the second half of the U23 Men's XCO to finish among the top 20 riders.

Ivory, the current elite men's national series champion for cross country and eliminator, as well as the reigning Australian U23 XCO champion, put on a fantastic show in Hafjell, riding his way up from 37th at the end of the first lap to finish 18th behind winner Michiel van der Heijden (Netherlands) in a field of 96 riders. 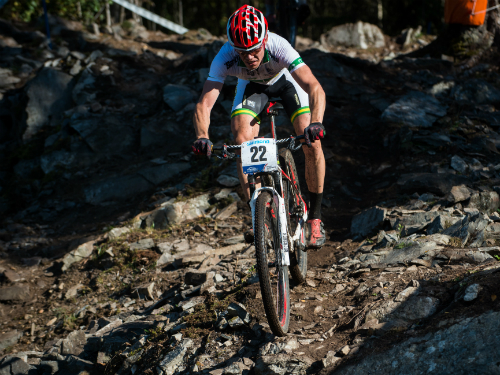 Looks a bit like Cadel, no? Cameron Ivory, en route to 18th place in the U23 men's Olympic cross country race. (Marius Maasewerd)

Also representing Australia in the U23 Men was Scott Bowden (TAS) who finished 40th, Chris Hamilton (VIC) who placed 49th and Ben Forbes who finished a lap down in 68th place.

In the U23 women's race, both Holly Harris (NSW) and Emily Parkes (NSW) had admirable rides in their first year in the age category.

Harris is the current Australian U23 cross country champion and has a friendly rivalry with Parkes, with both often finishing races in neck and neck battles for position.

On Friday the Australians were affected by an early crash that blocked much of the field soon after the start. In this battle of the teammates, Parkes would be victorious, riding well in the latter half of the race to work her way up to 27th place.

Harris finished one lap down in 42nd position from winner Jolanda Neff (Switzerland), who added the under 23 women's championship to her overall elite women's world cup series title,

Crimmins, who last year beat both Troy Brosnan (SA) and Mick Hannah (QLD) in an event at the Thredbo Cannonball festival, seeded 7th for the finals after completing the course in 3 minutes 42 seconds.

Fellow Australians Ben Hill (TAS) and Benjamin Dengate (ACT) are seeded 31st and 33rd respectively, while Matthew McCorkell (ACT) did not finish after an unfortunate crash early in the course.

After a strong start today with a clean first section, Jungfels put in a consistent performance in each obstacle lap to finish just one step off the podium in 4th place. Tatiana Janickova (Slovakia) successfully defended her title to again be the women's observed trials world champion.

Our men's trials team were in action Friday in the 26" category. Both riders finished at the semi-final stage after displaying some impressive skills, with Nathan Mummery (VIC) in 21st place and Lachlan Sens (VIC) 30th.