Previous Next Show Grid
Previous Next Hide Grid
Image 1/
Video 1/
Audio
Fabio Aru's attacking style was again rewarded on Stage 18 after pouncing off the wheel of Team Sky's Chris Froome in the dying metres of the Alto Monte Castrove to take his second stage of this year's Vuelta a Espana.
By
Cycling Central

Aru attacked three and a half kilometres from the finish of the 157km stage, initially solo, before being joined by Froome a kilometre further down the road, to create what would be the winning move.

With Froome concerned less with the stage, and more in maximising his time gain on Alejandro Valverde (Movistar) and Alberto Contador (Tinkoff-Saxo), Aru was given an arm-chair ride up the short, but nonetheless selective climb and by the finish had only to pull himself out from Froome's draft in the final metres to take the stage, which he did, dutifully.

"It's incredible," said Aru. "My energy isn't the same after 18 stages but I'd really prepared for the Vuelta.

"It's the first time that I've raced here, I like the route and hope to come back."

It was Aru's second stage win of this year's Vuelta a Espana, and his third Grand Tour stage victory of 2014. But while he conquered the stage, it's the increasingly fascinating general classification battle which captured most attention.

As he's done throughout the Vuelta, Froome played a patient game on the early grades of the Alto Monte Castrove, twice being temporarily dropped by Contador and Valverde, but rode stubbornly, to keep himself within his limits and in touch.

It was a familiar sight, Froome, far from imperious at this year's Vuelta, wavering, but hanging tough, and importantly when the selection finally established, he was there. And not just there, but attacking too.

A fierce acceleration from Froome after Contador, Valverde and to a lesser extent Joaquim Rodriguez (Katusha) had fought out a stalemate with a series of nullified attacks, immediately distanced the trio with just under three kilometres to race.

None could respond. The begrudging co-operation of Valverde and Contador in the chase stemmed the losses to 12 seconds at the finish, but with Saturday's penultimate stage summit finish at Puerto de Ancares significantly more challenging and Froome's strength growing, the race is far from settled.

With the time gained on the stage, Froome now sits outright second, 1min 19sec behind Contador, while Valverde slips to third at 1min 32sec.

"When Froome attacked, I decided to leave the responsibility to Alejandro (Valverde) because he was second in the overall standings," said Contador.

"I knew that the difference was going to be minimal at the finish because the final two kilometres were easier. I lost time but I hope it won't be a problem." 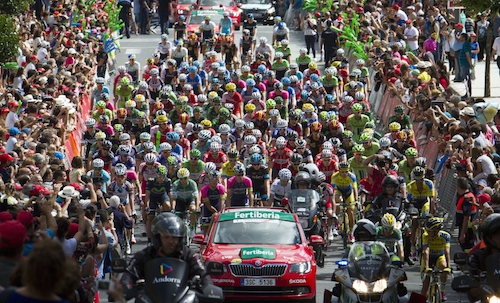 The peloton gets underway earlier in the day in A Estrada. (Getty Images/AFP)

Fabian Cancellara (Trek Factory Racing), Robert Gesink (Belkin) and Tom Boonen (Omega Pharma-QuickStep) all pulled out of the race before the stage from A Estrada.

Gesink, who had been seventh in the overall standings before the stage in northwestern Galicia, withdrew for family reasons.

Stage 19 of the Vuelta a Espana is a medium mountain stage, 180.5km from Salvaterra di MiÃ±o to Cangas do Morrando.

SBS will broadcast eight live stages of the Vuelta a Espana, in addition to daily highlights.