The Spaniard took no undue risk on the short, technical city course around Santiago de Compostela, finishing the stage well down on the day's winner, Adriano Malori (Movistar), in 101st, 1min 40 back. But with a healthy buffer to play with heading into the stage, his lead in the overall was never in threat.

Chris Froome (Team Sky) clawed some time back on the Spaniard, completing his Vuelta 1min 10sec back after finishing 63rd, while Alejandro Valverde also moved to within two minutes of Contador after an impressive 32nd on the day.

The final riders to roll down the start ramp were slowed dramatically by a change in conditions on course, a brief downpour, midway through the stage rendering a number of corners treacherous at speed, and more or less handing the day's victory to then leader Adriano Malori.

Malori had posted the time to beat, 11min 12sec, before the squall, with Rohan Dennis (BMC), third on the day, caught right toward the end of his ride in the weather event.

"I felt really strong," said Dennis. "It was a little bit of bad luck with the rain but that's the way it goes. Hopefully, next time, I will be a little bit more lucky."

No rider came close to Malori after that, the Italian overjoyed to win the first Grand Tour stage of his career.

"I'm thrilled," said Malori. "Honestly I didn't know how the time trial would go, not after how hard the last week has been. Luckily, my team let me do my own thing yesterday and I took it really easy, it meant I could go full gas today.

"When I saw that I'd pulled eight seconds to Sergent, which for me was a big favorite, I knew I was in with a shot. I was lucky to get dry asphalt, but I think, all things being equal I would've been hard to beat anyway. This is a great way to finish the Vuelta, now on to the Worlds, where I hope to be among the best."

For Contador it completed a dramatic comeback after crashing out of the Tour de France some two months ago, with a broken tibia to standing on the dais today, as a Grand Tour winner. In July the Tinkoff-Saxo's rider appeared to hang in the balance and even in early August his own assessments of his form, and racing prognosis were grim at best.

The race began with little expectation but after a buoyant first week, he began to believe more was possible, and when Nairo Quintana dropped out of the race due to injury, it was clear that Contador was a front-runner to take overall honours.

Only a fast-improving Chris Froome came anywhere close to the Spaniard in the race's final week, the Brit himself recovering from injuries sustained at the Tour de France. The 2013 Tour de France winner however ran out of road. More than a minute of his 1min 10sec final deficit was lost to Contador in the race's opening team time trial, and first individual time trial, with the two fighting out a tense stalemate thereafter.

And with Valverde taking out the third spot on the overall podium, the Vuelta a EspaÃ±a was nothing shy of star-studded - for the first time in the race's history all three riders to stand on the final podium are former Grand Tour winners - reflecting the depth of quality in this year's race. 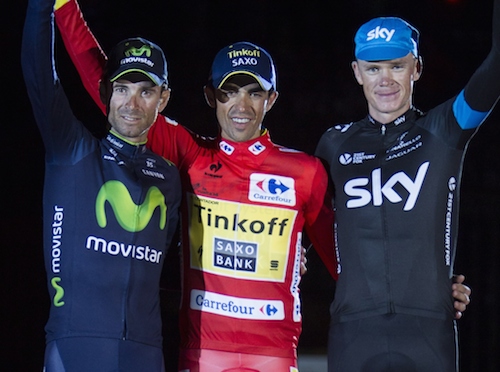