Previous Next Show Grid
Previous Next Hide Grid
Image 1/
Video
Audio
Dylan van Baarle won the Tour of Britain after retaining his overall race lead during a pair of concluding stages on London.
By
AFP

"I like these kind of stage races very much, not too long, but at the start of the week when I saw the list of riders, guys like Wiggins and Kwiatkowski I knew it was going to be very hard," said Van Baarle. "I was hoping for perhaps top ten.

"It's been a very hard race, the roads are heavy, lots of little steep climbs but also the six man teams is a factor.

"It makes it really exciting as we saw in the stage of Alex Dowsett on Friday when the peloton were pulling and pulling and could not catch the break. That ride inspired me a little bit for our break on Saturday." 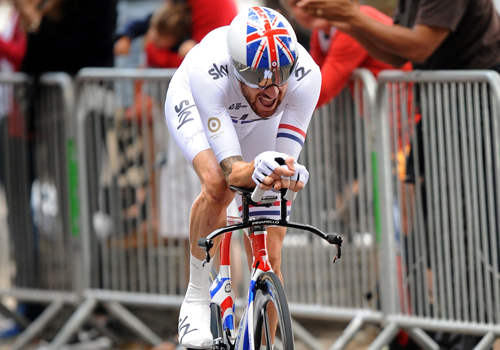 Wiggins won the day's opening 8.8km individual time-trial but, as he suspected, had left himself with too much to do in terms of defending his title.

He got the better of Sylvain Chavanel (IAM) by eight seconds, with BMC's Stephen Cummings third by another second.

"I'm pleased to have won the time trial in London," said Wiggins. "That was obviously the goal at the start of the week as well as the GC.

"I'm up to third now so it's not a bad defence of the title. I'm just pleased to be back in London racing and winning.

"I came in a bit short of race days. I've had 35 days ahead of the start. I certainly felt I was lacking a bit at the start of the week but I've just got better every day.

"I feel like I've started to come into some good shape at the end of it. It's been probably the toughest Tour of Britain I've ridden."

The second race on the roads of central London was won in a blanket finish by Marcel Kittel as the Giant-Shimano rider held off home favourite Mark Cavendish (Omega-Pharma-QuickStep) to enjoy fresh success on British soil this season.

Kittel has won Giro d'Italia stages in Belfast and Dublin, Tour de France stages in Harrogate and London and Tour of Britain stages in Liverpool and London.

"The lead-out was great today and that made the win possible," said Kittel. "To start and finish the race with a win is really nice, especially here in London again.

"It worked out really well for us at the end today. We waited late to move up to the front on the right as planned and then Tom took me round the top corner before dropping me off in a perfect position.

"It was a hard sprint but I had enough to come back at the end and hold on. It's a nice was to end the week here."

But by finishing safely in the peloton, van Baarle, who started the day with a 19 second lead, made sure of the title.

"I didn't really win the race today, I won it in Brighton yesterday," said Van Baarle. "It was tough to defend my jersey in a time trial against Kwiatkowski but I did it and I'm very happy, I will remember this day for my whole life." 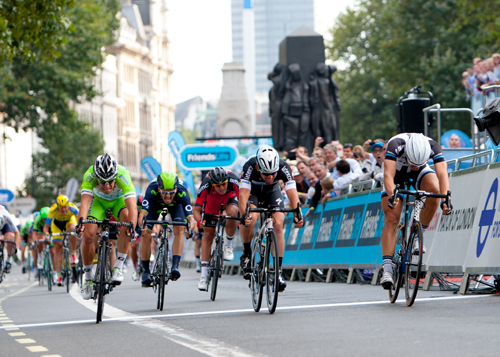 (Marcel Kittel again got the better of Mark Cavendish - AAP)