Previous Next Show Grid
Previous Next Hide Grid
Image 1/
Video
Audio
The final event in the UCI Road World Championships calendar, the elite men's road race, is set to be one of the most open in years.
Tweet

Picking a winner in Sunday's World Championships elite men's road race looks to be about as easy as selecting the winning lottery numbers. The middle-ground nature of the 254km course in Ponferrada, Spain, is neither too hard, too easy, opening the way for a rich field of potential winners.

The race will take in 14 laps of the 18.2km circuit that includes two relatively easy climbs.

The problem is, each one will be tackled 14 times and that has left many people unsure as to how the race will pan out. A lot, understandably will depend on just how hard the teams race up the climbs, and which teams are willing to commit totally to breaking the field apart.

Too idle a race, and the sprinters will likely have their day, too over the top, and expect to see a group smaller even than that of the women's road race, Satuday, approach the finish together..

For the likes of home favourite Alejandro Valverde, this could be one of his last chances to land a world title having five times previously climbed on the podium. Alongside him, Spain will have a potential foil in Joaquim Rodriguez, who was second last year and third in 2009.

The course looks ideal for the smallish puncher-climbers such as reigning champion Rui Costa of Portugal or Australia's Simon Gerrans, the winner of Liege-Bastogne-Liege in April.

But both will be marked men, Costa as the champion and Gerrans because of his fine form in winning back-to-back Grand Prix in Canada.

Belgium come into the race with plenty of options but perhaps also a foggy situation over who is the team leader. Philippe Gilbert (2012) and Tom Boonen (2005) have both already won a world title but Greg Van Avermaet, who was in fine form in April during the cobbled classics -- Paris-Roubaix and the Tour of Flanders -- over similar distances should fancy his chances.

Certainly team tactics will play a role but not everyone has the kind of fire power the Spanish and Belgians will be bringing to the race.

One such 'lone-ranger' is Fabian Cancellara, a four-time world timetrial champion and three-time winner of both Roubaix and Flanders. He skipped the timetrial on Wednesday to concentrate on winning this race. He can only count on two team-mates, though, while other favourites will be in nine-strong teams. But Cancellara says that will put the onus on them to lead the peloton. 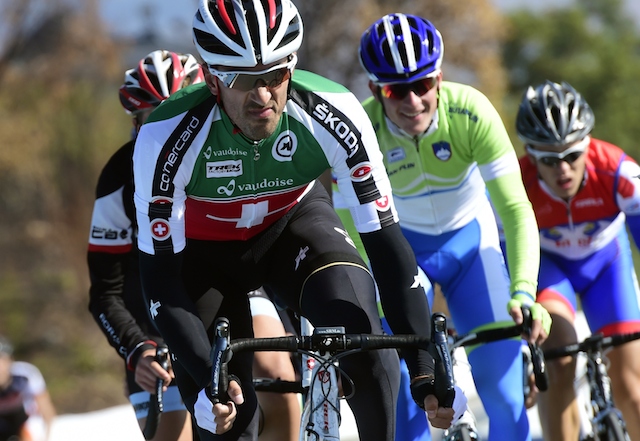 Asked about his chances, he said: "It depends on how the race goes, how the big teams are riding. They have to make the race hard (for him to win).

"All the big teams have a strong team, with a strong sprinter, but we will see because each lap will get harder and harder.

"It's always up or down, so it's going to be an interesting race. It's only 250 kilometres, but there is a lot of climbing."

The many climbs could prevent sprinters from reaching the end with the bunch but riders such as German John Degenkolb have previously proved capable of sticking with the punchers on short climbs or ones that aren't too steep.

If he is amongst a leading pack, as he was at Roubaix, he could become the favourite. Other names stand out such as Tour de France winner Vincenzo Nibali, although he was more suited to last year's course in his home country.

The man he dethroned as Tour champion, Chris Froome, is not expected to trouble the leaders, but his team-mates Geraint Thomas, or Ben Swift could be good outside bets.

Thomas had top 10 finishes at both Roubaix and Flanders in April and won the Commonwealth Games road race last month, although over a much shorter distance.

The big enigma, though, will be Slovakia's Peter Sagan.

The course is made for his abilities but he has been far from his best this year and frustrated on several occasions. He had nine top five stage finishes at the Tour but didn't win one.

He was also 10th at Milan-San Remo, sixth at Roubaix, third in Gent-Wevelgem and second at Strade Bianche. His only major win this year was at E3 Harelbeke in Flanders, which is hardly a return worthy of his talent before he went right under the radar at the Vuelta a Espana.

SBS will be broadcasting the elite men's road race live on SBS ONE, with streaming available on the Cycling Central website from 1730 AEST.