Cobbles and Alpe d'Huez to feature in 2015 Tour de France

Previous Next Show Grid
Previous Next Hide Grid
Image 1/
Video 1/
Audio
For the first time in Tour de France history the legendary Alpe d'Huez will be climbed on the penultimate stage of the 2015 edition before the final procession in Paris.
By
AFP

That was one of several surprises unveiled on Wednesday as the official route for the 2015 Tour, from July 4-26, was announced in Paris by Tour director Christian Prudhomme.

After this year's exciting fifth stage, in which defending champion Chris Froome (Sky) crashed out with a broken hand and wrist, won by Lars Boom (Belkin), the cobbles return for a second successive year while the first part of the race pays homage to some of the greatest cycle races in the world.

But perhaps the biggest shock is the lack of time trial kilometres, something that will not favour 2013 winner Froome, who had said last month that he was hoping for more, or longer, time trials to give him an edge on Alberto Contador (Tinkoff-Saxo), who pipped him to Vuelta a Espana glory in September.

"One aspect of the race which I feel are my strengths is in the time trials," Briton Froome had said ahead of last month's World Championships in Spain.

"I'm quite eager to see the 2015 Tour route and whether in the time trials I can get an advantage on him (Contador)."

The 2015 course will thus be seen as giving an advantage to two-time winner Contador, or even Giro d'Italia champion Nairo Quintana (Movistar).

Title-holder Vincenzo Nibali (Astana) will also likely look favourably on the course as he is considered weaker than both Froome and Contador against the clock.

Nibble excelled on the cobbles this year, finishing third on that stage, and will no doubt look forward to the fourth stage, the longest of the race at 221km, in which there will be seven cobbled sections totalling 13.3km, with six of those coming in the final 45km.

"The alchemy of the Tour is to use every possible terrain," said Prudhomme of the perilous cobbles.

Nibali gained more than 2min on all his main rivals this year on the cobbled section that took in parts of the prestigious Paris-Roubaix spring classic course, as will next year's fourth stage.

The day before that the third stage will also play homage to another one-day classic, La Fleche Wallonne, with a finish on the brutally steep Mur de Huy (wall of Huy).

That, along with the stage eight finish up the Mur de Bretagne (wall of Brittany) forms an integral part of the first week of racing along almost exclusively flat terrain in which sprinters will have plenty of opportunities to have their day.

Those two tough finishing climbs, as well as the return of bonus seconds for the first three, for the first time since 2007, are aimed at animating the early part of the race, according to Prudhomme.

"I want to see the leading contenders fighting for the victory right from the off," said Prudhomme.

Another thing Prudhomme wants to see is riders battling for victory on a day of special significance, which is why the fifth stage from Arras to Amiens will pass through some of the most important battlefields of the Somme, continuing the World War I theme from this year's course and aimed at resonating particularly with Australians, New Zealanders and Britons.

Once the first rest day is out of the way, following the ninth stage from Vannes to Plumelec, a short 28km team time trial, it will be all about the mountains.

Three days in the Pyrenees and four in the Alps, including five summit finishes in total, are what await the peloton.

For the sprinters it will be largely about surviving so they can take their chances on the final stage on the Champs Elysees. 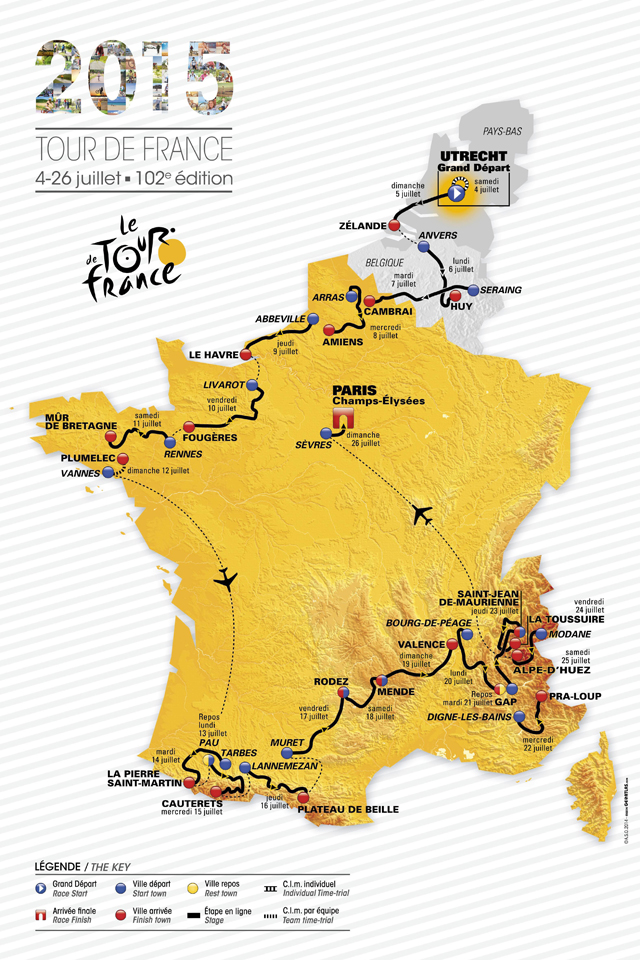