Top-Fives: The best young riders of 2014

Previous Next Show Grid
Previous Next Hide Grid
Image 1/
Video
Audio
The best and the worst. The warts and all. The highs and the lows. Whatever they were, wherever they happened, over the next few weeks we’re going to put forward our candidates for the performances of the year 2014. And where better to start, but a group of riders that have probably defined this season more than any other: The youth.
By
Al Hinds

It's startling to think what riders under 25 have done this year on the road; forget the white jersey, the best young rider at the Giro d'Italia was also the Maglia Rosa; Nairo Quintana. The world champion is 24; Michal Kwiatkowski. Away from the dominance of Vincenzo Nibali, the Tour was the story of Romain Bardet, Thibaut Pinot, and Rafal Majka. Italy found a new rider to cheer for in the boy wonder Fabio Aru. Michael Matthews rammed home his talent with a superb season, and while Nacer Bouhanni may have missed a ticket to the Grand Depart with FDJ.fr he still posted 11 wins in a season that challenged the established sprint hierarchy.

Spoiled for choice, it wasn't easy distilling a list of riders down to just five, but we're happy that the five we have chosen are the absolute standouts. Honorable mentions to Michael Matthews (Orica-GreenEDGE), Nacer Bouhanni (FDJ.fr), Wilco Kelderman (Belkin) and Carlos Betancur (AG2R) who all put forward strong cases, even the wayward Peter Sagan (Cannondale).

But these five stood above:

On the slopes of Pla d'Adet, three kilometres from the finish, Rafal Majka winked to a French Television camera, pushed off a media motorbike, and rode to his second stage win of the 2014 Tour de France. It was all cheek. It was all panache. The Pole has a way of being petulant on the bike, a rogue in a field glued together by tradition. He rides his own way, an unorthodoxy that would be the undoing of a lesser rider - but in Majka's case he has the talent to make it work. He was second fiddle to Alberto Contador for much of 2014 but on the evidence of his Giro d'Italia, where he was sixth overall, and his stitched together brace of stages at the Tour, the now 25 year old is going places, fast. Mainly up mountains.

The softly spoken Sardinian broke his silence at the Giro d'Italia when he roared to victory on the Montecampione - a stage run by organisers RCS specifically to commemorate the passing of Marco Pantani. As elegantly as he climbs mountains, one can make some comparison the divisive fallen Italian but perhaps a better parallel is closer to the current generation; Aru's team-mate at Astana, Vincenzo Nibali. 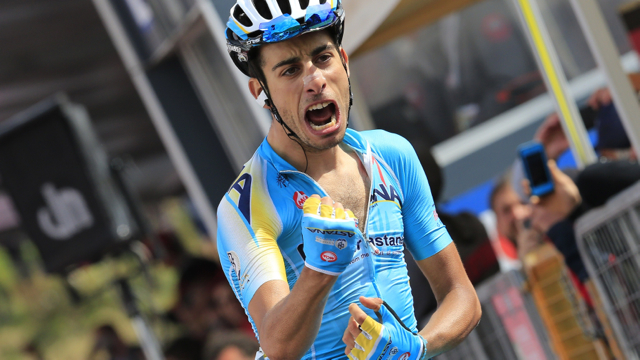 Aru worked for Nibali last year at the Giro, helping deliver him the overall title. He clearly picked up a thing or two, because this year he kept some big players off the final podium by finishing third himself. The season wasn't all about the Giro however, Aru was fifth too at La Vuelta, an impressive feat considering his age and capped his season - before Astana pulled itself from competition - with ninth at the Giro di Lombardia.

The thunderous chant that echoed strong throughout this year's Tour de France.

The Frenchman's popularity was already high after the 2012 Tour when he won hearts and minds on the road to Porrentruy. But all that seemed a distant memory when he returned to the Tour last year a shadow of himself.

All the more remarkable then, the way he's turned things around this year. Pinot may have been edged by the 37 year old Jean Christophe Peraud to the runner's up spot in France, but in that vital third week, where Grand Tour champions are made and broken, Pinot stood up. He rode where he needed to, unafraid to ride aggressively, proactively when the opportunity arose. Important too was his time trial which augurs well for his future in Grand Tours.

Eschewing a high finish in the Tour de France allowed Michal Kwiatkowski to thrive in the classics, and thrive he did. In the Ardennes he was unlucky to come up against two older, far more experienced rivals in Simon Gerrans and Alejandro Valverde. Even so, there wasn't much separating the Pole from eclipsing them.

Then, in Ponferrada he did just that. He put it all on the line in the hunt for rainbows, and was a worthy winner. The 24 year old is a pocket rocket, deceptively quick for his size in a bunch, and adept enough on the climbs to hang in with some of the world's strongest climbers. And he's especially loveable. His enthusiasm for the sport, his sheer delight in winning the world title and wearing the jersey for the first time in Lombardia was brilliant. He's a bright light in a sport that's still muddling its way out of darkness.

And who else but the Colombian can complete our top-five? From his Giro d'Italia winning domination, to stepping up as an ambassador for UNICEF, Quintana has had a pretty happy 2014. He's one of those guys that's quietly gone about his business this season, making little noise, just kicking the goals he's set out to achieve. Okay, he didn't go to the Tour de France, and okay, he crashed out of La Vuelta, but his season was made in May.

There he put a rocky start behind him to peg back Cadel Evans, then Rigoberto Uran, and ride himself into the history books. No Colombian had won the Giro d'Italia before, and only one had won a Grand Tour; Luis Herrera. Quintana, as humble as Herrera, is going to need a bigger trophy cabinet than that of old Lucho. Next year's Tour is the Colombian's bounty to take. A rider at the peak of his powers, the peak of the sport, and only growing in stature.