The medals came from Glaetzer in the sprint competition, Glenn O'Shea in the omnium and team stalwart Anna Meares in the women's keirin.

Glaetzer outfoxed Great Britain rival Jason Kenny with two straight wins in the best-of-three final. The second race saw Kenny lead the Australian into the final lap but was overrun in the final metres. Bronze went to Colombian Fabian Hernando Puerta Zapata ahead of New Zealand's Sam Webster. The gold was Glaetzers second in the competition after winning silver in the keirin.

Earlier Glaetzer had set the fastest time of 9.516secs in qualifying, the third fastest time on record, and only slightly slower than his Australian record of 9.459secs, set in Aguascalientes just under a year ago.

All 24 qualifiers finished inside the magic 10-second mark. Peter Lewis (NSW/Jayco-AIS) set the first real benchmark of 9.747secs, which stood until Glaetzer took the top spot.

In the 1/16 finals Glaetzer and Lewis were too strong for Kazunari Watanabe of Japan and Colombian Santiago Ramirez. It was a close match for Schmid who was narrowly beaten on the line by Frenchman Michael D'Almeida.

Glaetzer moved through the 1/8 final over Hersony Canelon of Venezuela, while Lewis was just beaten in a photo finish by Czech Pavel Kelemen.

Lewis was able to advance winning his repechage heat to set up a quarterfinal showdown with Glaetzer, won by Glaetzer in consecutive rides.

Glaetzer took the first ride against Colombian Fabian Puerta, however Puerta struck back taking the second before being relegated for not holding his line which sent Glaetzer straight to the final against Kenny.

O'Shea was in the mix for gold in the omium right up to the points race but just fell short to finish behind Germany's Lucas Liss. American Bobby Lea was third.

O'Shea sat in third position after the first three events held on Saturday following a second in the opening scratch race, 13th in the individual pursuit and second in the elimination race.

On Sunday, O'Shea recorded the third fastest time of 1min 2.411secs in the 1km time trial to move to a clear second overall before fifth (13.076secs) in the flying lap to consolidate his second place ahead of the final event, the points race.

A large group gained a lap on several of the overall contenders, including O'Shea, which dropped him to fourth early.

Laps continued to be taken as O'Shea dropped to ninth, before a cunning move with Liss saw the duo take a lap and O'Shea moved back to third.

Another strategic move shortly after saw O'Shea join with Venezuelan Maximo Rojas and Juan Esteban Arango of Colombia to take another lap, pushing him into second and the silver medal. 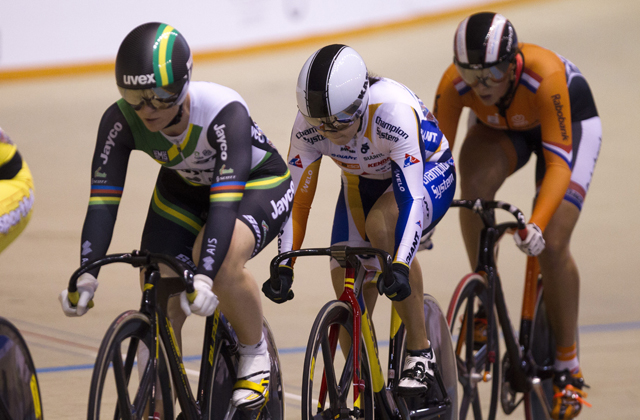 (Anna Mears in the women's Keirin)

Meares backed up from a crash in the earlier Sprint event to again medal at a World Cup. She finished third behind the powerhouse Chinese pair of Shuang Gao and Tianshi Zhong.

Meares and reigning Oceania champion compatriot Stephanie Morton both finished third in their round one heats.

Meares overcame Jessica Varnish of Great Britain in a photo finish in her round one repechage to advance. A photo finish was again required in the next heat between Morton and France's Virginie Cueff, with the latter initially being awarded the win before she was relegated.

In the second round, Meares hit out with nearly two laps to go and managed to hold on to take the win and a spot in the final.

Earlier medals in the men's team pursuit and women's team sprint gave Australia the top spot on the medal tally ahead of Great Britain and Germany.

The next round of the World Cup series will be in London from 5-7 December.