Astana's hopes of remaining within cycling's professional ranks suffered a potential blow after a media report on Monday claimed team members met with the Italian, he has however denied the allegations.

"I feel obliged, albeit very reluctantly, to once again deny the latest MEDIA BULLSH*T with regards to my presence ("during the night", or even in broad daylight, if you prefer) at the Astana Team Training Camp in Montecatini (I've been in that town, if I remember correctly, in 1994 to taste the famous waffles) last year in November," Ferrari said on his website.

"The bombshell of "the dark shadow of Ferrari" is absolutely FALSE and whoever has published it will respond about it in the appropriate courts: I hope that the Kazakh team will ask adequate compensation for the damages.

"Up to a few years ago I coached some of the Astana athletes, including Vinokurov: it has never been a secret, we never hid anything, we attended training venues where there were many other athletes, all in broad daylight.

"Curiously Teide or St. Moritz, back then "suspicious" locations as defined by the very UCI, have now been "cleared" and are more popular than ever with cyclists and teams above any suspicionÃ¢â¬¦"

Astana's World Tour future is hanging in the balance after brothers Valentin and Maxim Iglinskiy, and three riders from the Astana Continental team, tested positive for banned substances in the past year.

Astana's Continental team was suspended over a week ago and the International Cycling Union (UCI) is expected to make a decision this week on whether to grant the Kazakhstan-based team, run by disgraced former professional Alexandre Vinokourov, a World Tour license.

That decision could be swayed by the report in La Gazzetta dello Sport which claims Ferrari met with members of the team in November last year at a team training camp in Montecatini Terme.

It said prosecutors from Padua, who began to probe Ferrari and his doping and financial activities in 2010, are set to hand "500 pages of evidence, including the names of 90 cyclists" to anti-doping officials at the Italian Olympic Committee (CONI). 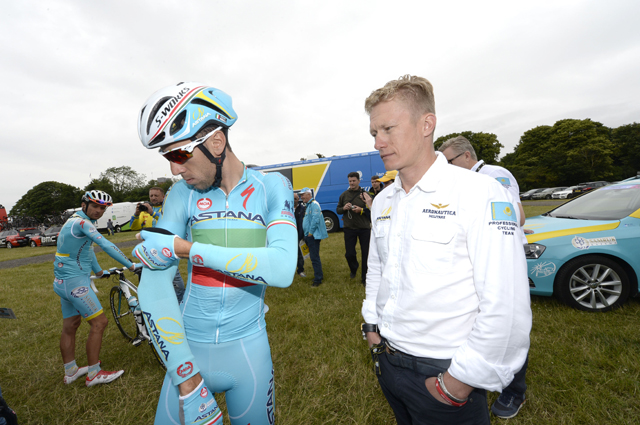 Among that evidence is a "photograph of Ferrari chatting to certain members of the team" in November 2013, although La Gazzetta dello Sport said the evidence contains "nothing to link" the team's reigning Tour de France champion "Vincenzo Nibali with Ferrari".

Ferrari, who advised Armstrong throughout the disgraced American's career, has been banned for life by CONI and the United States Anti-Doping Agency (USADA) from working in sport or with athletes.

Likewise, athletes are banned from consulting Ferrari under threat of suspension.

In the past three years three Italian professionals, Filippo Pozzato, Michele Scarponi and Giovanni Visconti served three-month bans for consulting Ferrari, who is reputed for his expertise in using the banned blood booster EPO (erythropoietin) without detection.

The UCI License Commission is set to rule this week on Astana's World Tour future, but UCI president Brian Cookson has been reported as saying he held a "an extremely dim" view of the situation.

Without a World Tour license, teams are denied automatic access to major events.