Tour Down Under: Stage 3

Previous Next Show Grid
Previous Next Hide Grid
Image 1/
Video
Audio
A surprise attack by Rohan Dennis saw the South Australian win Stage 3 and ride away with the Santos Tour Down Under leader's jersey with BMC team-mate Cadel Evans finishing second on the day.
By
Cycling Central

With the focus on Evans, Richie Porte (Sky), Tom Dumoulin (Giant-Alpecin) and Domenico Pozzovivo (Ag2r La Mondiale) at the front of the race, Dennis launched an attack from behind just before the King of the Mountains banner.

The 24 year old forged past the leaders and up the remainder of the climb to take stage honours. Evans was the best of the chasers, finishing second alongside Dumoulin.

Despite a valiant performance, Jack Bobridge finished 39 seconds down, handing the leader's jersey to Dennis.

Thanks to the @UniSAnewsroom guys the past couple of days. It's been fantastic to hold the jersey. Still a lot of racing left. Thanks unisa

Big congrats to @RohanDennis on his win and for taking the leaders jersey. It's going to be a big day Saturday@UniSAnewsroom @tourdownunder

"The plan was for me to actually attack at the bottom and put the guys like Richie and Pozzovivo and a couple other riders under pressure and let Cadel just sit back," said Dennis.

"But obviously I was still too far back to actually follow that plan, we got the total opposite.

"I was caught further back in the lead-in and I just thought, OK don't stress, just take little steps towards the front, and don't try to go into the red zone before you actually hit the hill.

"I saw Cadel was away with four other guys, with Richie and Pozzovivo and Dumoulin, so I sat behind one of the Movistar riders and just crossed my fingers that he'd bring me back."

Evans crossed the line three seconds behind Dennis to move up to second overall, seven seconds in arrears.

"Cadel, he's still, in my eyes, a leader and I'm gonna respect that," said Dennis.

"I'm not sure how the team meeting's going to go but we're still both protected. There's still Willunga, Mt Barker and the last crit. So there's still solid racing to come."

Scroll down to read how the stage unfolded.

All time stamps are AEDT.

3:24pm: Rohan Dennis BMC launches a surprise attack just before the King of the Mountain and rode to win the stage, with team-mate Cadel Evans finishing second.

Four riders together with one kilometre to go.

3:19pm: Cadel Evans leads the field at the turn. Richie Porte on his shoulder.

3:16pm: Giant-Alpecin lead the peloton with five kilometres to go.

3:08pm: 30 seconds for Will Clarke with 12km to go. Teams fighting for position at the front of the peloton. Richie Porte said earlier that position will be key when the peloton hits the tight turn into the final climb.

3:04pm: Clarke forges on solo at the front of the race as Watson loses contact.

3:00pm: 17km to the finish and the break is being reeled in rapidly. They are only slightly more than a minute in front of the peloton. Hansen has been dropped from the break leaving just Australians Will Clarke and Calvin Watson at the front of the race.

2:55pm: The break's lead has nearly been reduced to just two minutes as Team Sky drives the peloton.

2:35pm: The effort at the front of the race has taken its toll on Axel Domont with the Frenchman being dropped from the lead group. The remaining three leaders have a 2min 50sec lead with 35km to the finish.

2:15pm: Less than 50km to the finish, the four leaders have a 2min 20sec lead. Clarke won the second sprint. Race leader Jack Bobridge is sitting behind Team Sky near the front of the peloton.

@ORICA_GreenEDGE DS Matt White toldeth the Tan-dog, "I think whoever wins today's stage will be very hard to beat (on GC)." #TDU #sbscycling

1:20pm: The peloton is about to begin the first of three laps that take in Lenswood, Woodside and Charleston and form most of the remainder of the stage. With 89km left to race the break hold a 3min 10sec lead.

1:15pm: In 10 days Cadel Evans' long career will come to an end. Cycling Central spoke to BMC General Manager Jim Ochowitz about this emotional moment and whether BMC will ever be able to replace Cadel.

1:00pm: With the break holding a 3min 30sec advantage, Drapac's Will Clarke is the virtual leader of the Tour Down Under as he is 1min 4sec behind Jack Bobridge on the general classification.

12:15pm: It is no secret that Richie Porte would dearly like to the win the Tour Down Under.

Porte spoke to Cycling Central's Mike Tomalaris before the stage, saying "I think we (Sky) have got to take a little bit of control. It's probably good to ride on the front anyway and make it a little tougher if we can. I think its going to be quite decisive the right hand turn into the bottom of the climb."

"Today and Willunga is where this race is going to be won."

12pm: Drapac's Will Clarke is trying his luck off the front of the peloton with a one minute lead. There are three riders trying to bridge to Clarke.

11:30am: The gun has fired but the peloton has a 7.5km neutral zone before racing begins. Two riders did not start today - Campbell Flakemore (BMC) who crashed and broke his collarbone after yesterday's stage, and Michal Kolar (Tinkoff-Saxo) who withdrew five kilometres before the finish of Stage 2.

11:25am: It's very hot at the start in Norwood with riders finding shade where they can.

Elsewhere, @juanjolobato winning in @tourdownunder is worth a mention. He's gotten better every year. He'll win more races this year.

11:00am: Race leader Jack Bobridge has local knowledge on his side, and has warned that the final climb to the finish could be underestimated by riders that haven't seen it.

Riders need to negotiate a 180 degree turn onto Torrens Hill Road for the final climb before the finish, which is 1.2km long with an average gradient of nine per cent. The road continues to climb before a left turn for the finish near Paracombe Hall. 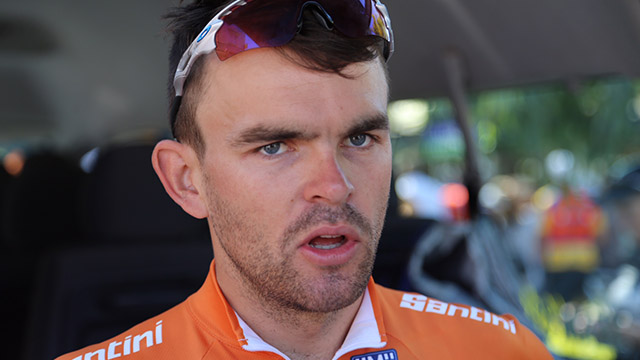 Orica-GreenEDGE sport director Matt White has picked today as crucial to the overall outcome of the race.

"(Stage 3) is the day that is going to decide the general classification for everyone," said White.

Also a big day for this man. "I'm motivated, I'm in good shape and I want to win this" #tdu @richie_porte pic.twitter.com/GJjCR44xft

10:30am: On the theme of broken collarbones, defending Tour Down Under champion Simon Gerrans is determined to transform his enforced absence from the Australian race into a lucky break.

The Orica-GreenEDGE rider broke his collarbone while training in Decemeber, so instead of racing the Tour Down Under he is training in Europe.

"As bitterly disappointed as I was not to be able to race in Australia, I really tried to focus on the positive side to that," Gerrans told AAP.

"It has given me the opportunity to approach the season in a different way.

"On top of that, hopefully it will leave me just a little bit fresher for my goals later in the season."
Read more here.

10:00am: Mike Tomalaris spoke to race leader Jack Bobridge after yesterday's stage. Here's what he had to say:

9:30am: There was an unfortunate end to yesterday's stage for breakaway rider Campbell Flakemore. The young BMC rider crashed on a descent while riding back to Adelaide after the stage, breaking his collarbone.

"As Campbell showed in the national championships and as he showed today, he is a fantastic guy for the race," said Flakemore's team-mate Cadel Evans.

"Just to get in that (breakaway) move was really clever and observant. He was really showing his maturity and looks like a rider to me who has the capabilities to utilize his physical potential, which is a pretty rare combination.

"It is really unlucky for him after what he did today and in the national championships. I was just thinking after the race what a good job he is doing."