More than one bad apple: a systems view on doping in cycling

Previous Next Show Grid
Previous Next Hide Grid
Image 1/
Video
Audio
There are again questions over Lance Armstrong’s admissions and apologies following a BBC interview in which the former cyclist and confessed drug cheat admitted he would take performance-enhancing substances again:
Tweet

Part of the debate has now shifted to whether there should be forgiveness and a reduction of Armstrong's life ban from competitive sport.

In safety science, systems thinking tells us that behaviour is an emergent property of systems; that there is a shared responsibility for all behaviour; and that this responsibility is shared across all of the people within the system in which the behaviour occurs.

This approach has proven powerful for identifying the systemic factors that combine to cause accidents and catastrophes. We now no longer blame individuals as the sole cause of events (even in cases when rules are wilfully broken). We look at the overall system and the web of contributory factors.

The blame culture is acknowledged to be out of date, morally and ethically wrong, and generally useless for improving safety.

A systems approach to doping

Let's apply this thinking to Armstrong's doping transgressions. Is it acceptable to make Lance Armstrong the scapegoat? Or is it actually the overall elite cycling system Ã¢â¬â comprising many people, organisations and agencies Ã¢â¬â that should be held to account?

American psychologist Philip Zimbardo famously discussed "bad apples" (or bad individuals) and "bad barrels" (external factors that create bad behaviours) when examining wrongdoing. It is worth looking at the "system" within which Lance Armstrong committed his doping. Was it really a case of one bad apple or were there bad barrels as well? Were there bad barrel-makers, bad barrel-owners and bad growers too?

This is in no way a defence of Armstrong's doping, or his behaviour towards the individuals who questioned him. Rather, to improve behaviour you have to focus on the system itself, not merely the individuals within it. Focusing all of the attention on Armstrong makes it difficult to prevent cycling moving forward as the bad barrels remain.

Cycling as a complex system

The elite cycling system is complex. It is made up of multiple people, groups, agencies and organisations, including cyclists, coaches, sports scientists, doctors, cycling teams, manufacturers, sponsors, sports organisations, governing bodies, manufacturers and doping agencies Ã¢â¬â to name only a few. This has important implications for causality and responsibility.

First, the doping program adopted by Armstrong and his teams was a result of interactions (good or bad) between all of these actors. Either knowingly or unknowingly, the behaviour of those within the elite cycling system enabled the doping program Ã¢â¬â or, in some cases, supported it. Armstrong has alleged, for example, that Union Cycliste Internationale (cycling's world governing body) president Hein Verbruggen covered up a positive test in 1999.

Were these interactions preventative, or if there were more of a culture of preventing the use of performance-enhancing drugs, the doping program could not have prospered.

Second, the doping program was enabled through multiple factors, not just Armstrong's transgressions (even if he was a driving force). A weak anti-doping system is one example. Thus it is the overall system that should share the responsibility for blood doping, not just Armstrong himself.

Remove Armstrong and many of the other factors that enabled him and his team to dope remain. It is naÃ¯ve to think others would not dope within a system that cannot prevent it. Further positive tests continue, indicating that the system is such that teams and cyclists will still chance their arm.

A shared responsibility for doping

So, who should share the responsibility? First, there are those who were knowingly involved: Armstrong, his teammates, doctors, coaches and so on. The United States Anti-Doping Authority's (USADA) "reasoned decision" on Armstrong labels the period in which Armstrong doped as the "dirtiest ever".

The USADA report mentions peloton's code of silence Ã¢â¬â the "omerta" Ã¢â¬â on doping. It notes that 20 of the 21 Tour De France podium finishers between 1999 and 2005 Ã¢â¬â Spanish rider Fernando Escartin is the exception Ã¢â¬â have been linked to doping. Add to this the intricate teams of doctors and suppliers needed and an intricate web of actors quickly emerges.

Second, there are those within the cycling system who were not engaged in doping programs but were nonetheless part of the system in which it was able to continue. This includes those involved in testing, governance, coaching and team management. They can all share some of the responsibility, even though they were not knowingly involved or doing anything wrong. This is just as aircraft designers, air traffic controllers, airlines and others share the responsibility for aviation accidents.

This all paints a picture of a broken system in which doping was able to prosper. It is hard from this viewpoint to have one scapegoat. Yes, Armstrong committed terrible acts, broke the rules and ultimately damaged the sport's reputation. But the system itself should share the responsibility, not Armstrong alone, simply because it was able to work for so long. 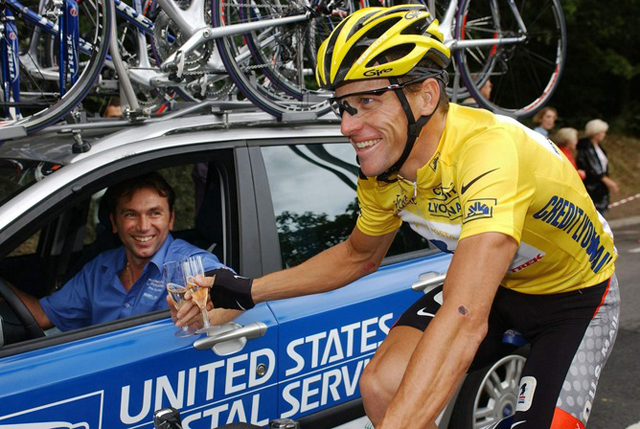 The wrong approach is to have scapegoats and to punish individuals. The correct approach is to fix the system: to identify all of the factors across all levels of the system that in any way enabled doping to occur. These can be factors related to governing bodies, rules and regulations, coaching and training, team management, drug testing policy and procedures, culture, sponsorship and prizemoney.

Interventions should then focus on removing these factors. Encouragingly, this is already happening. Only through in-depth, top-to-bottom examinations can true systems reform happen.

On the matter of forgiveness, there are some that have, some that will and no doubt some that won't. The issue is bigger than Armstrong, and the important thing now is to fix the sport, not to break him. In his BBC interview, he suggested cycling doesn't have the culture to be clean.

But it looks to be worse than that. Cycling might not have the right system to be clean. A systems approach to the issue of doping will show the full picture of responsibility and will enable the system reform required.

This article was originally published on The Conversation.
Read the original article.