Sun Tour turns on its head

Previous Next Show Grid
Previous Next Hide Grid
Image 1/
Video 1/
Audio
After the opening road stage, just 21 riders are left with a shot at winning this year's Jayco Herald Sun Tour, with two teams in the box seat...
Tweet

The best time to talk a rider is often at the start of the stage, when the day is unlikely to suit them, or their objective is to find form rather than results.

Perfect opportunity, then, to have a chat with a guy who, although considered washed up by many, is arguably yet to find his best: Matthew Goss of MTN-Qhubeka.

With five fast finishers in their 2015 line-up - Theo Bos, Edvald Boasson Hagen, Gerald Ciolek, Tyler Farrar and Goss himself - and a number exhibiting similar styles, we asked the 28-year-old Tasmanian if 2015 was a make-or-break year for him; whether the sprint roster may lead to a dog-eat-dog situation; and the pressure to perform under a one year contract.

"I was the one who said I wanted a one-year contract," he told Cycling Central in Mount Macedon.

"With the teams I spoke to at the time, that's what I said (I wanted). Because I don't want the teams to feel that I'm just going there for money - I'm going there to give myself the best opportunity to do the best I can. I'm not there (at MTN-Qhubeka) for any other reason than to get better, and to get back to where I had been."

A similar stage parcours to last year, albeit one day earlier, when overall winner Simon Clarke stamped his mark with a win and the race lead to boot, Thursday's 146.2 kilometre leg to Bendigo produced a similar race-defining outcome.

Because after today, 21 riders have a shot at winning this year's Herald Sun Tour...

Avanti, Orica-GreenEDGE and UnitedHealthcare were best represented - a quartet of riders for the former, three riders apiece for the latter two - as the race split apart on the first KOM of Mount Macedon, creating a lead group of 21. By the second KOM of Mount Alexander, its crest 71.3km from the finish, it thinned to 11.

Mt Alexander was where Clarke, Jack Haig and Cameron Wurf made their stage- and race-winning move of yesteryear, but this time, the 10 dropped came back and it was 21 again. 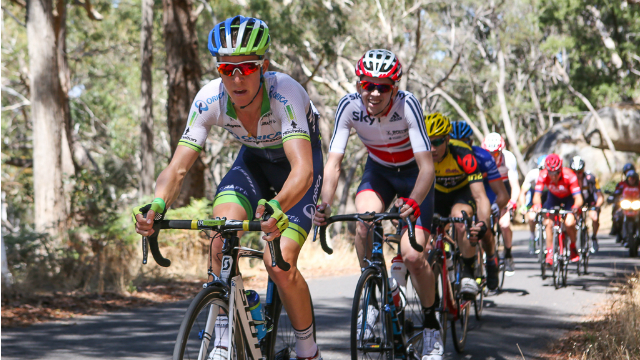 Meanwhile, the peloton was languishing, a touch over eight minutes in arrears... By the finish, most of the bunch would lose triple that time, and any hope of a high overall finish, come Sunday on Arthurs Seat.

The absence of point man Simon Gerrans was an opportunity for OGE's other riders to step up to the plate, said Cameron Meyer, who explained how he and Avanti's Joe Cooper went clear on the run-in to Bendigo, before flicking his fellow escapee in the sprint to the line.

Cooper's team-mate Patrick Bevin, who now sits third on GC, 15 seconds behind Meyer, is Avanti's best bet for the overall.

So, is it better to be the cat or the mouse?

If we were to pick a dark horse?

That would have to be the guy considered Australian cycling's next big thing (actually, the way everyone's talking about him, make that huge thing). Today, 19-year-old West Australian, Robert Power, riding the Sun Tour for the Jayco-AIS Under-23 National Team, took both KOMs with aplomb, and is 29 seconds behind the race lead.

It would be a monumental upset if he were to win. But over the coming days, Power can sit back and watch the argy-bargy between OGE and Avanti - then throw them the kitchen sink on Arthurs...