Sun Tour on a knife edge...

Previous Next Show Grid
Previous Next Hide Grid
Image 1/
Video 1/
Audio
With one crucial stage remaining, a spate of crashes on an otherwise seemingly innocuous day has placed the 2015 Jayco Herald Sun Tour on a precipice, reports Anthony Tan from Nagambie.
Tweet

Saturday's third stage, a 146.7 kilometre jaunt from Orica-GreenEDGE benefactor Gerry Ryan's vineyard, Mitchelton Winery, to Nagambie, the town closest to it (so feverish is his property investment in the area, they're already calling it 'Gerryville' or 'Ryan Town'), was destined to end in a bunch sprint.

With a sprinter like Caleb Ewan, but without someone like Marcel Kittel or Andre Greipel to seriously challenge him, a second consecutive victory became a fait accompli, such was the Jet's level of confidence after winning yesterday, on the exact same finishing circuit. 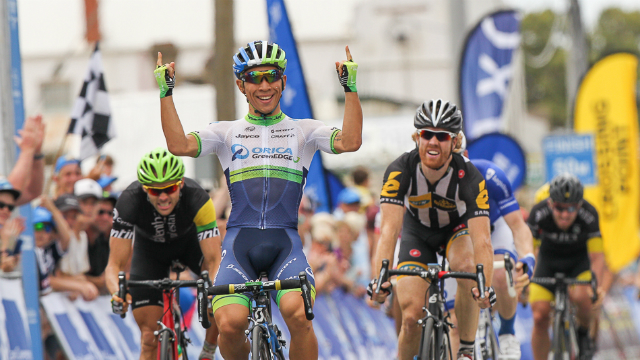 The overnight lanterne rouge, a sprinter-Spring Classics star and one of MTN-Qhuebeka's key 2015 acquisitions, had spent the previous day in a three-man break and said Friday he wasn't sure if he'd contest the finish.

The 30-year-old American liked the idea of doing something unfamiliar to him, though - like the decision to change teams after the last seven years with Slipstream Sports.

"If you stay in one spot too long," Tyler Farrar told Cycling Central at the start of Saturday's stage, "even if it's a great set-up, I think you can get a little too comfortable. 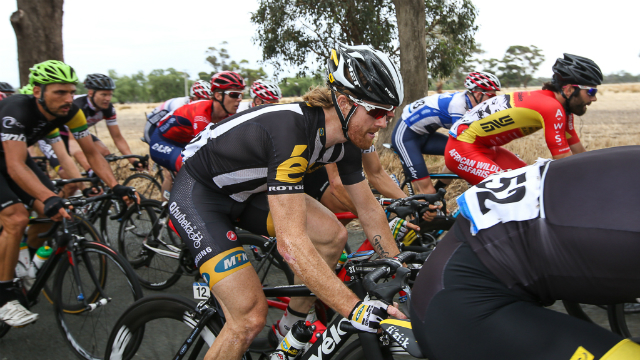 Farrar: Out of his comfort zone... (Con Chronis)

"I think their (Slipstream Sports, which now runs under the Cannondale-Garmin banner) priorites have shifted over the years, as they do with any team. I prefer to be on a team where, the races that I'm good at, are a higher priority.

"As a sprinter and Classics rider, there's only so much I could do to contribute (at Slipstream Sports). Coming across to MTN-Qhubeka, it's a team where the Classics are a huge priority."

He says "the best form of training is racing", but if you haven't done the prep, then the racing's going to suck...

Turns out, he decided to have a crack in Nagambie. And, after flogging himself the day previous, Farrar finished second to the most exciting sprint talent to come out of Australia since Robbie McEwen.

Nice one, Tyler... Let's see you pound the pavÃ©, then be part of history at Le Tour; an African team at La Grande Boucle... it doesn't get much cooler than that.

That is until an African rider wins La Grande Boucle, of course!

Now, back to today, to reality, and what's in store Sunday on Arthurs Seat, where this year's Sun Tour will ultimately be decided.

One would've thought that, with a six-man break up the road, the peloton would evoke a sense of relative calm. Nothing could've been further from the truth...

The first crash, just before the first of two KOMs, brought down defending champion Simon Clarke, among five others.

And, with just over three kilometres remaining, cometh the third. What the...

Why, we asked Orica-GreenEDGE sport director Matt Wilson, after the first two days without incident, so many crashes?

More importantly, how will the team of race leader Cameron Meyer approach the decisive, final stage on Arthurs Seat?

Wilson, and Meyer, know they cannot watch everyone. Which is why Avanti Racing Team, still underdogs but with four riders 34 seconds off the race lead, is, according to us at least, in the box seat.

They cannot wait till the final of three ascensions up Arthurs; they must play their hand, use all their cards, and save the best, Patrick Bevin, for last.

Clarke appeared badly banged up but is a tough little bugger and will surely start tomorrow. OGE, however, despite having three in the top 21 on GC, really only have one card left to play.

And that, no doubt, is Meyer.