Previous Next Show Grid
Previous Next Hide Grid
Image 1/
Video
Audio
The Vuelta a Andalucia over and Chris Froome stands triumphant, but with Alberto Contador seconds off the pace, the stage is set for a thrilling rivalry between the two as both riders hone their form for the European Spring.
By
Cycling Central

Tweet
The race ended overnight with Froome defending the lead he earnt the stage previous, and Contador settling for second overall at two seconds. The performances of the two Tour rivals however stands out the tightness of the contest, a paper thin margin separating them, and indeed in strength of their glowing early-season form. Contador won in the mountains, and took the racing to Froome, but the Brit punched back with his own superlative performance toward the race's close. Both men mean business.

It feels very much as if little has changed since the two traded blows last season, from Tirreno-Adriatico through La Vuelta a Esapana, and will delight a cycling fandom hoping for the momentum of their nail-biting rivalry to continue in the same vein.

Impressive too was the performance of Team Sky, which sent half of its Tour team to the Volta ao Algarve, and won that too with Geraint Thomas. With Froome in a "depleted" Team Sky setup in Spain was Mikel Nieve, Peter Kennaugh, Xabier Zandio and Kanstanstin Siutsou, all of whom finished with Froome in the top-10 overall. After a topsy turvy 2014, Team Sky looks back to its ravishing best and that should cause concern for anybody up to speed with their back catalogue.

Contador meanwhile appeared unconcerned at Sky, and indeed Froome's performance, shrugging off the near defeat, with a smile on his face.

"I'm pleased with the progression of my shape. Actually, I'm a bit surprised to be at this level at this part of the early season. I'm not too far in my preparations, but I see my performance on the stage that I won and in the time trial as a sign that I'm ready to reach for my main season objectives.

"Two seconds separated me from the win, but today there was little I could do to take back time on Froome. But the most important aspect is that my preparations for my main objectives are going perfect. It wouldn't have changed anything if I had won, as we still need to prepare for the next goals with the same concentration no matter what". 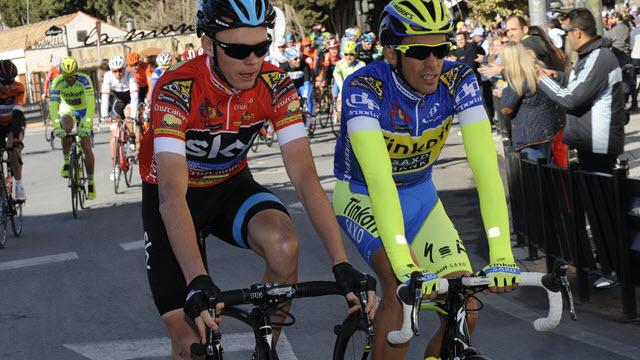