Previous Next Show Grid
Previous Next Hide Grid
Image 1/
Video 1/
Audio
Michael Matthews sprinted off the back of a dominant leadout by his Orica-GreenEDGE team to take the Stage 3 victory and overall lead at Paris-Nice.
By
Philip Gomes

The Australian showed a clean pair of heels to Davide Cimolai (Lampre-Merida) and Giacomo Nizzolo (Trek Factory Racing) as the other stage favourites like John Degenkolb (Giant-Alpecin) failed to fire in the finale.

My Litttle friends to keep me company tonight #onehappyboy pic.twitter.com/Vpa0t8QZUa

In summary, there was a strong three-man break which hogged the TV time and no rider was troubled by the three third category climbs as the peloton rolled to the Saint-Pourcain-sur-Sioule finish.

After Thomas Voeckler (Europcar) bridged to early breakaways Philippe Gilbert (BMC) and Florian Vachon (Bretagne-Seche Environnment), a gentle chase began for the peloton which was approximately five minutes behind.

The question? Would the very strong trio stay to the end or would the sprint trains time their catch to perfection?

Europcar team director Lylian Lebreton neatly summed up the situation for letour.fr, saying Voeckler's main goal in joining the break was to "add excitement to the race".

"We have seen that the race so far was always stereotyped with sprint finishes," Lebreton said. "We also have an option if the break gets caught with Bryan Coquard, who should find the finale to his liking.

"But with three riders like this, anything can happen. We know what Thomas is capable of doing and you can always count on Gilbert on a course like this. As for Vachon, he is on his home roads and will be especially motivated." 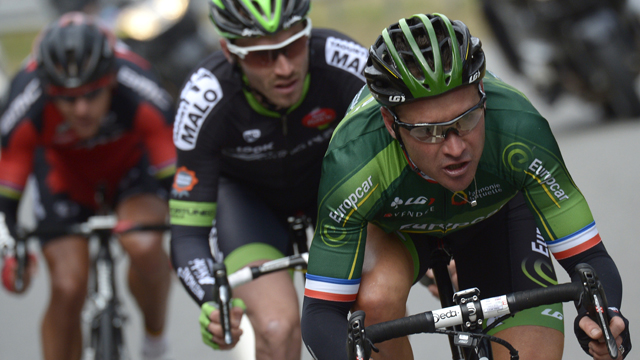 (Thomas Voeckler was his usual animated self in the break - Getty)

As the fecund pre-springtime French countryside rolled by, Voeckler was bringing his brand of facial stylings to the front of the race as Gilbert was eating up the mountains classification points - cementing his lead in that category.

Vachon was content to aid his better known companions with regular contributions to the workload on roads he knew better than his mums home cooking.

Lebreton's cautious optimism was warranted as the time gap began to fall as riders from Etixx-QuickStep and Giant-Alpecin wound back the elastic to a more manageable three minutes with 30km to go.

But what kind of sprinter? The pure or the punchy? The finish was not flat. In fact the stage ended with a rise, suiting a rider like Matthews.

The leading trio was reduced to a duo with 20km to go as Gilbert threw in the towel. Only 30 seconds separated Vockler and Vachon from oblivion.

With 10km of road left to race Vachon also surrendered, but the indefatigable Voeckler continued as three riders shook themselves loose of the peloton in chase.

Romain Bardet and Jan Bakelants of AG2R and Astana's Paolo Tiralongo combined to ride past Voeckler and held no more than a 16sec advantage as the peloton menaced.

The race finally came together inside two kilometres with Orica-GreenEDGE out-muscling their opposition for position before Matthews easily took the win.

Next up for the peloton is the 204km Queen stage to the mountain top finish on the Col de la Croix de Chaubouret where the general classification will be turned on it head.