Previous Next Show Grid
Previous Next Hide Grid
Image 1/
Video 1/
Audio
Lampre-Merida’s Davide Cimolai was the winner on Stage 5 of Paris-Nice after a sprint finish in Rasteau.
By
Philip Gomes

Cimolai finished ahead of Bryan Coquard (Europcar) and Australian Michael Matthews at the end of the 192.5km stage which started in Saint-Etienne.

After the climbing action on the previous day the peloton returned to a more predictable set piece clearly designed to produce a mass sprint.

The stage presented the peloton with four categorised climbs and two intermediate sprints before the finish in Rasteau, and was one that almost finished in favour of the breakaway.

The quartet rode out to a maximum lead of 3min 50sec before the peloton began its wind back. With 50km left to race the time gap had dropped to three minutes with all of the stage favourites and general classification leaders protected by their teams. 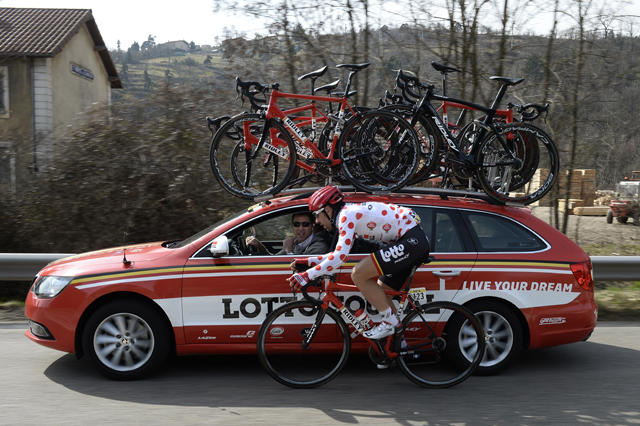 (Mountains classification leader Thomas de Gendt was the dominant rider in the break - Getty)
I went for the points in the first climb and I didn't really expect to be in a break. I was surprised it went that far because we never had much more than three minutes but when I saw in the finale that there was still a little bit of a gap I went. I was just 200 metres short. The jersey is not entirely won yet, there are still 51 points to collect tomorrow. We'll see what my closest rivals do.

De Gendt continued his domination of the mountains classification along the way to Rasteau by taking the maximum points on the Col de la Republique, Col du Deves, Cote de l'Aleyrac and Cote de Buisson to build his classification lead on Philippe Gilbert (BMC) and Chris Anker Sorensen (Tinkoff-Saxo).

The break lost Sicard and with 8.8km to go then Talansky with only four kilometres of road to the finish as De Gendt attempted to hold off the peloton, but resistance was futile and the remaining two leaders were swept up with the end in sight.

The final 200 metres was a mixed affair with no organised leadout, leaving the contending sprinters to fend for themselves before Cimolai hit the front with more speed to carry him to the finish than either Coquard or Matthews.

Pretty crazy final today got boxed in with a few hundred to go missed the jump but ended up 3rd still got green. pic.twitter.com/Jo413Ee6Yf