Previous Next Show Grid
Previous Next Hide Grid
Image 1/
Video 1/
Audio
A resilient Tony Gallopin shrugged off atrocious conditions on the penultimate day of racing at Paris-Nice to storm to a deserved solo victory, and move into the yellow jersey.
Tweet

The Frenchman, who could become the first home winner of the prestigious spring race in nearly two decades if he can hold his nerve on tomorrow's final stage time trial on the Col d'Eze, struck clear on the Cote de Peille and was never caught. A ragged chase from four riders; Simon Spilak (Katusha), Rui Costa, Rafael Valls (both Lampre-Merida) and Jakob Fuglsang (Astana) came to nought, together finishing 32 seconds back, with Spilak leading the quartet over the line to finish in Nice, second.

Another half-minute back came the peloton, including Richie Porte (Team Sky), and Michal Kwiatkowski (Etixx-Quickstep), an oddly stalemated finish to what eventuated into a stressful finale for both riders. Porte leads Kwiatkowski by a solitary second, the reverse of the deficit going into today's 184.5km stage.

The man to beat however is new leader Gallopin. The Frenchman sits 36 seconds in front of former Paris-Nice champion Porte, a potentially decisive advantage, but one Porte will be gunning to peg back on his 'backyard' climb, the Col d'Eze.

"First I need to recover from today's effort and then I can think of maintaining the advantage I have tomorrow in the time trial," said Gallopin. "I'm really happy with the victory, it was a really hard day of racing, a hard day, and a great win."

A war on wheels
Gallopin's move came after a tug of war between Porte and Kwiatkowski that played out over the stage's two last climbs, the Col Saint-Roch and the Cote de Peille. Sensing some nervousness from Team Sky on the wet roads, and at times, madly winding descents in the southern French countryside, Etixx forced the pace over the Saint-Roch and split a select group into two 40km out from the Nice finish.

Porte was distanced, along with team-mate Geraint Thomas (Team Sky), and a nervous chase to the base of the Cote de Peille had the Kwiatkowski group, which also included Gallopin, hovering at near 30 seconds clear. Kwiatkowski's exuberance however took a toll, and as the climb to the summit of the Peille began, and the Pole's resolve beginning to falter, Gallopin broke away solo. 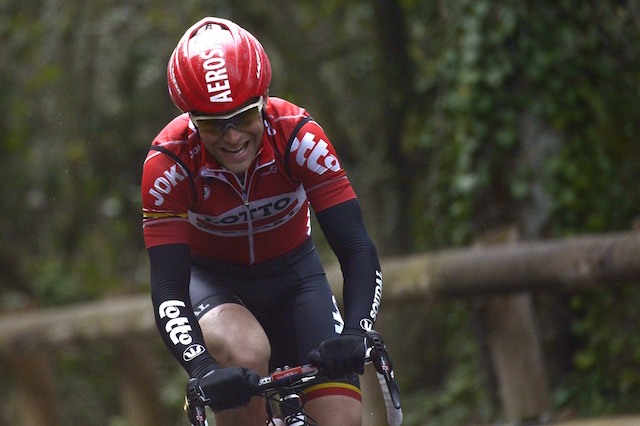 Tony Gallopin enroute to victory after making a solo attack before the summit of the stage's final climb, the Cote de Peille. (Getty Images/AFP)

With Gallopin forging clear, the two chase groups merged with Kwiatkowski and Porte again on terms. Porte wasted little time however in inflicting his own damage to the Pole, with a singeing attack that immediately distanced him. Porte was joined by Spilak, Valls, Fuglsang, Thomas, Rui Costa, and the sextet looked set to charge clear in chase of the lone Gallopin.

Kwiatkowski struggling behind and Team Sky with its best two cards in the second group on the road, the race was firmly in the British team's favour before disaster struck, twice, in a matter of minutes. First, Porte crashed with 18.2km to go on the descent off the Cote de Peille, and then, shortly thereafter, Thomas too came asunder.

Both riders were able to quickly remount their bikes, but were unable to rejoin the Costa group which was ploughing on ahead. Finding a second wind Kwiatkowski returned with the rest of a very sparse main group, and Porte and Thomas were brought back into the fold. Gallopin was too strong, and too wily to be caught with 10km to go, and by day's end had put himself firmly in the frame to become the first French Paris-Nice winner since Laurent Jalabert after finish more than 30 seconds clear.

Pretty disappointing day for @GeraintThomas86 and I. Felt like we were on slick tyres. Anyhow great to see @tonygallopin win #chapeau 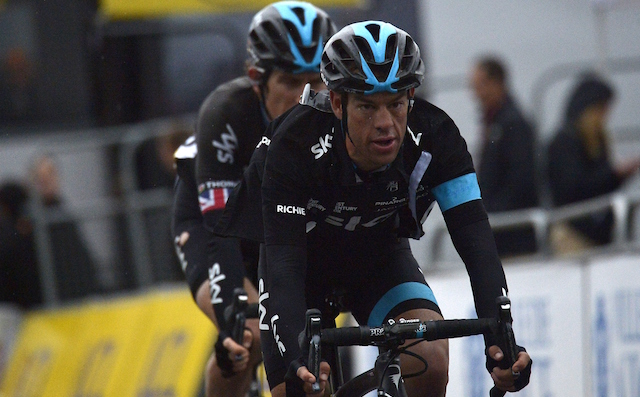 In the end, Richie Porte could brush himself off and look back on a day that could've been much worse after losing his front wheel at speed on the descent off the Peille. He remains second overall. (Getty Images/AFP)