And the Movistar rider held on to his lead on Tuesday after the closing stage's 10 kilometre race against the clock to finish 18 seconds clear of Bauke Mollema (Trek Factory Racing) in the standings. Rigoberto Uran (Etixx-QuickStep) finished third.

The success of Quintana, runner-up in the 2013 Tour de France, augurs well for the rest of the season after the second half of last year was disrupted by an injury suffered in the Vuelta a Espana.

For Cancellera (Trek Factory Racing) this 50th stage win of his career set him up for his latest assault on Sunday's Milan-SanRemo. He is hoping to go one better after finishing second on three of the last four editions of the one-day classic.

"I am happy with the performance, for sure," Cancellara said. "I had the feeling that I was going fast to the first split time because it was slightly down, and the way back is false flat up and with the speed bumpsÃ¢â¬¦I knew it was harder coming back. On the way out it was easier to push the big gears, and on the way back you had to push more. I got pushed from the car that I had to go over 60km/h (at the end) to get what I should.

"In the prologue I made some mistakes, and I was determined not to repeat that today," he added. "The biggest mistake was to come out of the aero position too early [in the prologue] and I kept that in mind today. I gave all-in today and I am really happy and satisfied to have another victory in the pocket, but more so for the larger and bigger picture on the weekend, and the next few weekends after." 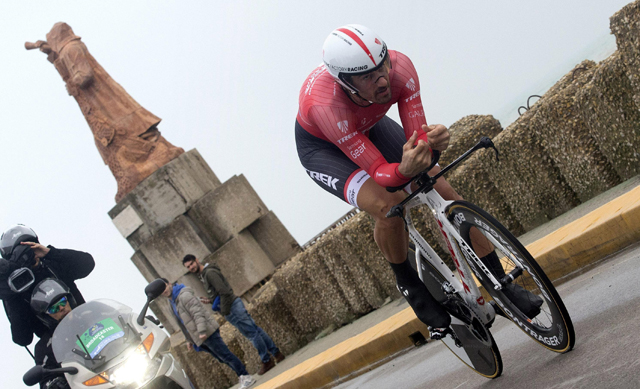