Etixx-QuickStep with strength in numbers for Flanders

Previous Next Show Grid
Previous Next Hide Grid
Image 1/
Video
Audio
They have been seen in multiples leading into the finish of the Classics races so far this season and its unlikely that the Tour of Flanders will be any different for Etixx-QuickStep.
By
Cycling Central

The Belgian team may be without traditional point man and three-time winner Tom Boonen, but the team nonetheless has named a powerful eight for the legendary monument.

Etixx-QuickStep has been outfoxed twice this year by singular riders, notably Ian Standard (Sky) at Omloop Het Nieuwsblad and Luca Paolini (Katusha) at GentÃ¢â¬âWevelgem, despite having the numbers in the finale.

As a result, team manager Patrick Lefevere is understandably cautious about delivering a winning outcome in the race that matters most to him, no matter the quality he'll have at the start line in Bruges.

"I think we have a very strong team for Tour of Flanders," Lefevere said. "At the start we have Niki, Zdenek, Matteo, and Stijn. If they find a way to collaborate together with the support of their teammates I think we are by far the strongest team.

"Alexander Kristoff and Geraint Thomas have entire teams behind them, so Katusha and Team Sky will certainly be controlling the race for those riders. But for sure I think we are the strongest outsiders."

Lefevere is of course being a touch disingenuous, Etixx-QuickStep almost always finds a way to collaborate, usually mounting a well timed assault which results in more than one of their riders being included in the final selection. 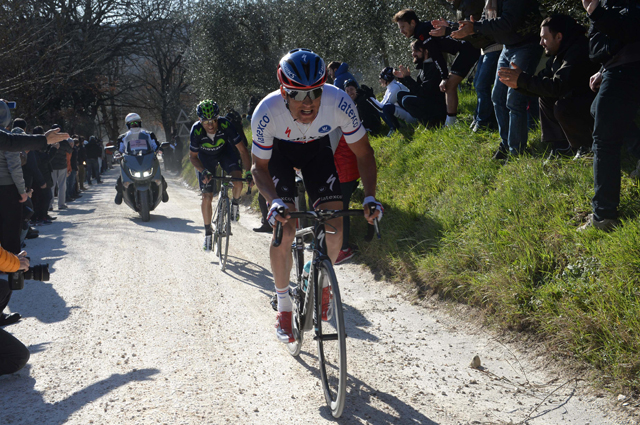 Stybar, already a winner at this year's Strade Bianche and runner up at E3 Harelbeke, is probably the Belgian squad's best option to post a result in absence of Boonen. But the team has depth few can match.

"I think at this point my condition is at the best it could possibly be going into De Ronde," Stybar said. "I think my condition has been very good for a few weeks now, and I hope now I have really hit the peak.

"Here we are a week after Gent-Wevelgem, a very hard race, and I am recovered. I have done well so far, but of course I want more. I want the cherry on the cake. So, I am ready for Sunday.

"This is now my third time racing Tour of Flanders. We performed the recon on Wednesday, which was nice to just refresh the memory. Today I rode the last 50 kilometres just to completely put it back in my mind and visualise the final. It's always good to reconfirm the parcours and fine tune the details.

"Of course now that people consider me as a favourite that changes my perspective of this race. Before it was just about racing and see what happens. Now, it is about racing to try and win."

With an overall victory under his belt at the Tour of Qatar, the 2014 Paris-Roubaix champion Terpstra has been close with second place results at Omloop Het Nieuwsblad and Gent-Wevelgem, but has yet to convert his unmistakable strength into a Classics win.

"My legs feel good today, but of course you can feel the tension as this is a special race," Terpstra said. "Last Sunday I felt really strong and I hope this Sunday I feel just as good. It was a good recovery week.

"We've already had some top places in the Classics and we hope on Sunday there is only one place, which is the top step of the podium. We've shown we can always be there in the final, we'd just like to add a victory to what we've done this year even if we are not the favorites.

"My strength is in a long, challenging race, and I think that is also the strength of our collective as a Belgian team. We work well together and we have a lot of good riders.

"Zdenek and Matteo are explosive riders, and Stijn and I can go for the long runs. It's nice to have different scenarios where we can come away with a win. We'll try our best and I cannot wait to be at the start line in Brugge on Sunday."

The Tour of Flanders
will be live for Eastern states, South Australia and the Northern
Territory. Western Australia can view the race live online here at Cycling Central.