While
all the pre-season hype focussed on BMC Racing Team, GreenEDGE and RadioShack-Nissan-Trek,
Omega Pharma-Quick Step is showing that it is the real superteam of
the 2012 season.

Adding Tom Boonen's victory at Gent-Wevelgem,
Omega Pharma-Quick Step has won 26 races this season
while the BMC Racing Team, and its collection of superstars, has posted just two winning
results, with Cadel Evans's victory at the Criterium International providing the brace.

It's
not that Omega Pharma-Quick Step is lacking in riders of quality, it's what it is doing
with its roster that is making the cycling world sit up and take
notice: working as a team to produce a string of results that will
probably remain unmatched in 2012.

Now it would be true that a
team like BMC has its eyes on the biggest prize in the sport, a Tour de
France repeat with 2011 champion Evans, but when you have riders like
Thor Hushovd and Philippe Gilbert you expect that little bit more. So far BMC's two biggest pre-season aquisitions have failed to fire for
reasons that range from bad luck, illness or bad legs.

It could
be argued that Omega Pharma-Quick Step has a powerful collection to match a team like BMC
with riders like, Tom Boonen, Tony Martin, Levi Leipheimer, Sylvain
Chavanel, Nikki Terpstra, Francesco Chicchi and the Velits brothers
Peter and Martin. But most observers could say that their collection is
individually, a rung below that of BMC.

But that assumption plays
no part in the performances of Omega Pharma-Quick Step this season, something recognised
by Boonen in his Gent-Wevelgem post-race comments.

"The team
once again was super strong," Boonen said. "Steegmans in particular was a
really key rider. The team did their best fight to make the front, they
expended all energy they had to try and help.

"It's the team
spirit we have in this moment on this team. The entire team is showing
its power. Other teams are as strong as ours, but we have to say this
moment we are not so bad either. We have a team where, I am not a guy
who screams at my teammates, but with our team I don't have to say the
same thing ten times. Everybody knows what they have to do."

That
cohesion of Omega Pharma-Quick Step has been in evidence pretty much from season start,
with their roll starting at the low key Tour de San Luis in Argentina.

There, Levi Leipheimer topped the general classification and Francesco Chicchi and Boonen dominated the field sprints. 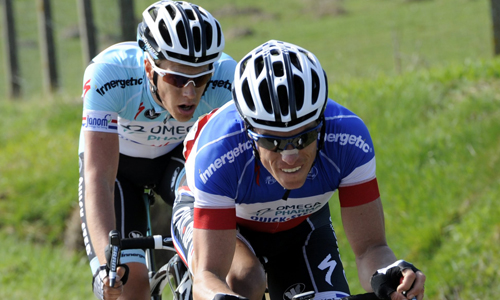 Terpstra's
victory came a week ago at the Dwars door Vlaanderen and post race the
Dutchman reflected on the strength of Omega Pharma-Quick Step, saying the team was the
strongest classics squad assembled.

"I hope this victory is just the start, and that this is not my best," he told Belgian website Niewsblad.

Terpstra then went further in his comments, saying the team was 10 times stronger that Fabian Cancellara's RadioShack-Nissan-Trek team.

"I
know I'm not Fabian Cancellara, but in terms of the team we are 10 times stronger than RadioShack-Nissan-Trek. We have the breadth and many
assets to make the Swiss's life miserable."

Sure enough, that
scenario played itself out at Gent-Wevelgem, where Cancellara went from a
long way out, and Omega Pharma-Quick Step, powered by the big engine of Gert Steegmans,
combined to run Cancellara down and take him out of the final equation.

Heading
into the two biggest classics races of the season, the Ronde van
Vlaanderen (Tour of Flanders) and Paris-Roubaix it's likely that Omega Pharma-Quick Step will emerge with both races added to its growing list of victories.

All credited to a super team of super riders.