Previous Next Show Grid
Previous Next Hide Grid
Image 1/
Video
Audio
Left speechless after the opening day of the Tour, Al Hinds, hopes the focus returns to racing in Stage 2 which could prove one of the more interesting days in this year's race.
By
Al Hinds

If spectacle was the aim, the opening stage of the Tour de France certainly delivered, but as a sporting occasion it was far from that, although admittedly through no fault of the athletes themselves. This was a calamity of biblical proportions that will live in Tour folklore alongside Tour winners being disqualified for catching the train, and the France TV car taking out Hoogerland and Flecha in 2011. Perhaps the latter is a more apt comparison, if only because the blame can rest only at the feet of the logistical staff that run the event.

The bus incident, which had hints of Roger Moore in the 70s classic Live And Let Die, was funny for a second, and then only a symbol of impending disaster. An onrushing peloton, and a blocked finish are not a recipe for anything else. Orica-GreenEDGE's communication director Brian Nygaard explained that ASO staff had ushered the bus forward, and that the driver was blameless. The Tour organisation has told a different story, if only to save face. At the very least, it did seem odd that the driver continued on into the gantry when from afar it appeared the bus was never likely to pass under the obstacle.

But that's really just a sub-story. The race was bastardised as in the chaos, the peloton was told that the finish had been brought forward to 3km to go, but then returned to its initial location as the bus was cleared. That could have been OK, but the speed of communication was lacking.

Several teams, including Lotto Belisol, FDJ and Omega Pharma QuickStep, appeared to be setting themselves up for the three-kilometre scenario only for the crackle through the radio of the race jury's decision to revert back to the initial finish location, confusing all and sundry. What did all this do? At the very least, it made a mockery of the stage finish as riders were left in sixes and sevens as to what was going on. Greg Henderson blasted the race organisation for just that reason, and had every right to. It was farcical.

And what of the crashes? It's really not a stretch in suggesting that the anxiety of the peloton was exacerbated by the shape-shifting finish. GC guys looking to position themselves safely for "the final 3km" were suddenly rushing forward to be there at 6km to go, sprinters and leadout trains were firing from 10km out. Surprise, surprise, a lot of riders went down. Mark Cavendish. Andre Greipel. Peter Sagan. Sigh. Could it have helped to in such extraordinary circumstance simply stop or neutralise the race before all this took place, and restart it later down the road? An argument for another day.

Marcel Kittel the winner, but few will remember the 2013 Tour opener for the German's powerful beeline sprint.

Preview: What to expect from Bastia-Ajaccio, 154km
While yesterday had bunch dash written all over it, Stage 2 has a very different dynamic. The Tour will head south through the centre of Corsica taking on four categorised climbs in the process, an uncharacteristically bumpy day for a stage so early in the race. The Category 2 Col de Vizzavona offers up five points for the first rider over the summit and is a nice carrot for a rider hoping to wear polka dots for a few days before the race hits the montagneux massifs on Stage 8.

This is an interesting and difficult one to predict. While the Vizzavona looks tough, and the parcours likely to suit the puncheurs, this stage could actually end in a sprint. It'll all come down to how hard the peloton chooses to take the first 70km, because once it crests the Vizzavona, there's plenty of time for the sprinters who've trailed off the back to work their way back into the main field.

On paper this looks like a day purpose-built for Sagan (Cannondale), Simon Gerrans (Orica-GreenEDGE) or Philippe Gilbert (BMC). That's if the stage plays out as the race director has designed it. If it's more sedate than expected, or if teams fail to close to the door on the sprinters over the top of the Vizzavona, don't rule out the likes of Matt Goss (Orica-GreenEDGE) or John Degenkolb (Argos-Shimano) staying in contention.

Some of the GC men may also look to test their legs, Katusha's Joaquim Rodriguez has been known to take a punt on days like these, climbs like the Category 3 CÃ´te de Salano, a steep but short drag just over 10km outside the finish is Ajaccio, a juicy ramp for Purito or Alejandro Valverde (Movistar) to sink their teeth into.

Despite the temptation however, I'd expect watchful but constrained rides from most of the Tour favourites. For the GC guys, keeping the powder dry early on speaks volumes of the riders that are smart about their preparation and serious about yellow not in Ajaccio, but Paris. Ultimately this stage will be more about flexing the muscles than open warfare. A day for the opportunists, it should nonetheless prove fascinating watching.

History & The Tour in numbers
1 - The number of countries the Tour will pass through in 2013. It's only the first time since 2003 the Tour will be totally raced within French borders, and a somewhat nationalistic salute to a race that has regularly crossed into foreign territory. When it first incurred into Metz (then part of Germany) in 1907, riders were delayed hours by immigration. How times have changed. 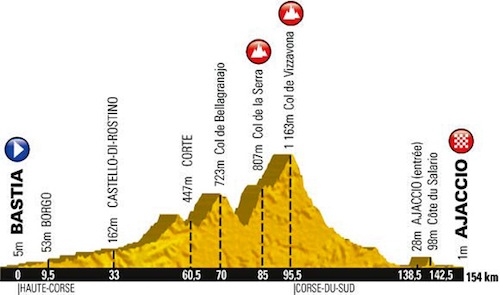 On offer for the riders on Stage 2
Green Jersey - 20 points at the intermediate at Castello di Rostini and 45 points at the finish in Ajaccio.
Polka dot Jersey - Three Category 3s, the CÃ´te du Salario, Col de Bellagranajo, and the Col de la Serra, plus the Category 2 Col de Vizzavona which tops out at 1163m. A total of 11 points on offer.
Yellow jersey - Again, without time bonuses, whoever wins today is likely to take yellow. If Kittel can keep himself in the peloton, it will complicate things.

Stage 2 will be streaming live through the SKODA SBS Tour Tracker from 2120 AEST. Live broadcast on SBS ONE and SBS HD begins at 2200.