Previous Next Show Grid
Previous Next Hide Grid
Image 1/
Video
Audio
Before the Tour de France, Orica-GreenEDGE principal Shayne Bannan pinned the team's success on its ability to convert its stage-winning capability into a victory on the world's biggest stage. Having now done that, anything from here is a bonus, writes Al Hinds, but the sniff of yellow, and the overnight momentum, might just be enough to give the Australian team the Nice team time trial as well.
By
Al Hinds

Simon Gerrans is invaluable to Orica-GreenEDGE. He has been since its inception. Not just as a role model, Gerrans's record is impeccable in that regard, but for what he's achieved on the bike. Since linking up with OGE at the start of 2012, Gerrans has hit something of a purple patch, and he's grown into one of the best one-day riders in the peloton.

The Victorian has done it all before, with three previous Grand Tour stage wins to his name, including a 2008 Tour stage triumph. Stage 3's win yesterday wasn't so much a personal milestone as a tick in the box for the team. Fittingly it was the team as a whole that whirring in full gear that got Gerrans over the line first, edging none other than a usually invincible Peter Sagan in a bunch sprint. Yeah, Peter Sagan.

But for Bakelants taking a second on Stage 2, Gerrans would also be in yellow, alas, all hope is not lost for OGE or Gerrans, with tonight's team time trial a very real chance for a second straight win and for that dream to become a reality. A golden era for Australian cycling? Hard to argue against it.

Oh, and Anthony Tan. We expect a photo blog.

If Sagan does not win today I will run naked around Calvi this evening. Thankfully, if I'm wrong, most of the #TdF will have evac'd by then.

What's on the menu for Stage 4
With Corisca behind the Tour, the race hits the French mainland for the first time in the coastal city of Nice, the traditional finish of the spring opener Paris-Nice, for a team time trial. At 25km this isn't the longest of team chrono efforts, but that'll just make it more the frantic, almost an extended sprint leadout, than the 60km plus efforts we're accustomed to seeing in Grand Tours.

And unlike the 2009 TTT, which laid waste to Cadel Evans's chances of a high finish in Paris and all but sealed his exit from Lotto, this isn't at all technical. An out-and-back loop, exclusively along main roads that will perhaps ask most of teams in the opening 500 metres, where there are two of the most difficult corners on to, and off, the Rue de la Buffa.

Once teams overcome those two minor obstacles, it's full gas to the finish. The course sweeps out to the west of Nice past the airport, makes a turn towards the road to Grenoble before swinging back toward the ocean, where the choppers should be able to film some beautiful shots back across the ocean. That's what it's all about, right? The finish along the Promenade des Anglais should see teams hit and hold speeds above 60km/h before the final dash to the line, a stone's throw from where they started.

What to expect
This is the first day where we're guaranteed to get gaps between some of the main favourites for that famous yellow jumper, and as such it'll offer the first chance to see who's got form and who doesn't. Mind you, with the lack of distance, and the focus on the team element, we can't read too much into it - leave that for Stage 8 on Ax-3-Domaines - but it will be an early marker.

For several teams this will be treated more or less as a rest day, there should however be five or so teams which you cover with a blanket: Team Sky, BMC, Garmin-Sharp, Omega Pharma QuickStep, Saxo-Tinkoff and Orica-GreenEDGE.

Team Sky, which won the most recent Grand Tour TTT at the Giro in May, leads the line, although the team has been hurt by injuries to Ian Stannard and Geraint Thomas, who both would have offered plenty of additional horsepower on the flat parcours. Chris Froome and Richie Porte should be taking big turns to keep the team humming along, and they'll be near the top of the leaderboard.

When Cadel Evans won the Tour in 2011, BMC was outstanding in the first week, and having been strengthened in the years since, the American team will again be aiming to impress before the racing settles down over the next three days.

Garmin-Sharp has an affinity to this sort of effort having won the last time the Tour hosted it, and built much of its early Grand Tour success around its performances in TTTs. Rohan Dennis, Jack Bauer, David Millar and Ryder Hesjedal are an imposing quartet, and with Andrew Talansky, the team will take some beating.

Saxo-Tinkoff on paper looks among the strongest, Michael Rogers and Romain Kreuziger are strong additions to its TTT arsenal, but most interesting will be how Alberto Contador rides after a distinctively sluggish individual time trial in June at the Criterium du Dauphine.

Orica-GreenEDGE is on a high after Simon Gerrans's win and it won't take a miracle for the team to take a second consecutive victory. Orica-GreenEDGE, like Omega Pharma QuickStep, has plenty of firepower on the flat and the team has a very good shout at yellow.

Omega Pharma QuickSpet is the joker in the pack. Tony Martin is a huge loss, but the team still has the sort of squad purpose-built to ride fast over 20km. Look for Sylvain Chavanel and Niki Terpstra to be working hard for the world team time trial champion team.

*Note, team time is taken on the fifth fastest finisher among a team. 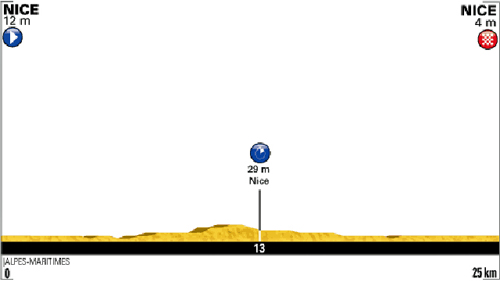 History & The Tour in numbers
Nice - It's actually been quite some time since the Tour visited Nice, a slight for cycling fans in the area only comforted because of the race's ongoing association with the prestigious Paris-Nice. The last time the Tour ran through these parts was way back in 1981, when the city hosted the Grand Depart.

Stage 4 will be streaming live through the SKODA SBS Tour Tracker from 2200 AEST. Live broadcast on SBS ONE and SBS HD also begins at 2200 AEST.