Previous Next Show Grid
Previous Next Hide Grid
Image 1/
Video
Audio
The road to Marseille promises a bunch sprint, but will it or will it not include an injured and now ejected Ted King, after the American failed to make the time cut on Stage 4? More to the point, asks Al Hinds, should it?
By
Al Hinds

King, who was caught up in one of the many crashes that plagued the finish of Stage 1 of the Tour de France, fought bravely to stay in the race knowing it was always going to be a close run thing. Injuries to his shoulder, which though not fractured, "sounded like a cement mixer", and several abrasions to his body, made the Nice TTT not far short of torturous.

So bad was the pain, King made no effort even to mount a regular time trial bike, choosing instead to ride the full 24.8km in a modified road frame to ease the stress on his damaged figure. For the American, the equation was simple, try and stay with his Cannondale team for as long as possible, before riding to the finish on his own inside the 25 per cent time cut.

Trying to hang on to the speed of the Cannondale charge proved too much almost from the get-go, making the task all the harder. For the majority of the 24.8km he would have to do it alone. And alone he did, suffering in silence, and all but broken by the finish, the American's fight was admirable.

Officially clocking 32min 32sec, a hardly sluggish 45.7km/h average considering his injuries, King had to wait to confirm his fate. As fastest finishers Orica-GreenEDGE broke into rapturous celebration King's Tour hung in the balance. Shortly after, and as expected the race jury announced the official time cut would be set at 25 per cent. King was just outside, but the race jury would not listen to appeals. King was out of the race.

Devastation for the day's other winner. A man riding his first Tour de France, continuing on, mind over matter, willing his reluctant body on against its screams to the contrary. King, however, was simply not quick enough. He failed to save his skin. Seven seconds was all the final margin was, an agonising amount by anyone's standard but for the race jury, it may as well have been two hours.

I can see how people see this an injustice. Neal Rogers, editor of VeloNews, makes a succinct and quite passionate call for King's reinstatement in the race here, arguing that the jury has in the past made flexible rulings over the implementation of the time delay cutoffs. Rogers also questions the correct record of King's time, after the American posted his SRM file online which showed King had done enough to remain in the race.

Conspiracy theories aside, I can understand the derision of what seems, an unfair call by the jury on a hapless victim. But the Tour is no charity, and despite what some may think, time cutoffs play an important role in keeping the riders honest. If King was unable to get himself within 25 per cent (an arguably generous margin in itself) of the winning time on an unchallenging parcours he probably shouldn't be at the race. That may see harsh but it's the reality of the sport.

Ultimately I'll be nonplussed if King does return for Stage 5, just as his expulsion won't haunt me. I also won't be surprised with either outcome. I can sympathise with Rogers calls for ASO to "show some humanity of its own", but I don't tend to agree with decisions such as these being ruled by heart rather than head. Just my two cents.

On yesterday's win, by Orica-GreenEDGE, why write words when images can tell the story just as well. This does a pretty great job of getting the blood pumping. Enjoy.

What's on the menu for Stage 5
Enough on yesterday, on to Cagnes-Sur-Mer and Marseille. Five stages in, and thanks to the shenanigans on Stage 1, and the unusually hilly first few days in Corsica, we've yet to have a full-on bunch sprint. Strangely we've yet to see any of the sprint protagonists from last year, Mark Cavendish, Andre Greipel or Peter Sagan raise their arms at a stage finish. And perhaps even more strangely, we can't even count on a bunch sprint today.

The Mistral which has been known to shatter pelotons in these parts as it did in 2009, will play a role, as will the distance (228km), and the berg-laden terrain. From 74.5km to go, the racing will be fierce, with rarely a moment of reprieve until the final downhill run into Marseille at 12.5 to go. Counting in the favour of the fast men however is the relatively gentle slopes that speckle the course, with nothing close to resembling the grippy slopes of Corsica on today's stage. 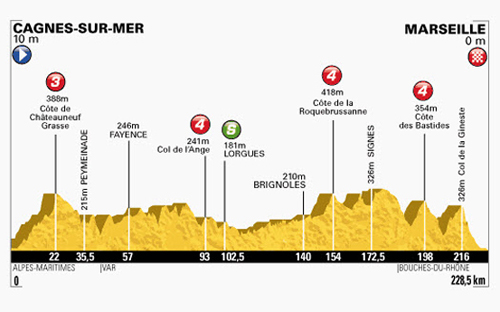 What to expect
The legs should be relatively fresh after the short and sharp effort yesterday, and with today one of only two real opportunities for the sprinters before the race hits the Pyrenees on Stage 8, there's a premium on a bunch dash eventuating. That'll help Orica-GreenEDGE control things for Simon Gerrans and his chances of keeping yellow, with Argos-Shimano (Kittel), Omega Pharma-Quickstep (Cavendish), Cannondale (Sagan) and Lotto-Belisol (Greipel) all with plenty to pull for. To say nothing of Orica's own Matt Goss who will be buoyed by the team's momentum over the last two days.

Expect a break to go clear in the early stages, probably over the Cote de Chateauneuf, before the peloton settles in for a big day in the saddle. Usual fare after that, a catch in the final 20km before the teams line things out for the finish. Struggling to look past a super-motivated Mark Cavendish to break his 2013 Tour duck, but I'll be happily wrong.

*Note if Daryl Impey finishes more than 11 places in front of Simon Gerrans in the bunch finish, even without taking time, he will take yellow off the Australian. If he does so, he'll become the first African in Tour history to wear the maillot jaune.

History & The Tour in numbers
5 - After Armstrong's unceremonious dismissal from the Tour history books, five is now the most number of times the race has been won, a feat achieved by four different men in the last 99 editions. Jacques Anquetil was the first to do so after completing win number five in 1964.

On offer for the riders on Stage 5
-Green Jersey - 45 points for the first rider over the line, and 20 points at the intermediate sprint in Lorgues. 65 points in total.
-Polka Dot Jersey - Category 3 Cote de Chateauneuf-Grasse 2 points, and three category 4 climbs, the Col de l'Ange, Cote de la Roquebrussanne, and Cote des Bastides each worth a single point.
-Yellow Jersey - Simon Gerrans should hang on to yellow though if he fails to finish 11 places behind Daryl Impey he'll concede the jersey to the South African.

Stage 5 will be streaming live through the SKODA SBS Tour Tracker from 2200 AEST. Live broadcast on SBS ONE and SBS HD also begins at 2200 AEST.