Previous Next Show Grid
Previous Next Hide Grid
Image 1/
Video
Audio
Magnanimous, calculated, or commercially driven? An honest mistake or a simple gesture of 'mateship’ from one mate to another? Daryl Impey’s ascent to yellow was always possible, but it certainly blindsided many at the finish to Stage 6 in Montpellier, writes Al Hinds.
By
Al Hinds

According to Orica-GreenEDGE DS Matt White at the finish this was something that had been planned after Simon Gerrans requested the possibility of gifting Impey the jersey at the start of the day. Gerry Ryan offered a different tale, that it had been a mooted possibility that had been attempted, or at least discussed, even the day previous.

Interestingly, Gerrans was hardly obvious in the way he handed yellow off. After another rider had lost the wheel in the fast finale, he initially sprinted hard to stay with Cadel Evans's attempt to bridge back on - had he persisted it may have kept him in yellow - before finally admitting defeat and slotting in well down the bunch.

The confirmed time gap only sealed it for Impey to become the first African to wear the maillot jaune.

As a gesture, demonstrating the team spirit so inherent in cycling but so often ignored, it was huge.

It's not without parallel, Frank Schleck all but handed the Tour to Carlos Sastre in the 2008 race up Alpe d'Huez when the Spaniard was given the freedom to fly up the road.

In a more indirect manner, Bernard Hinault 'handed' the jersey to team-mate Greg LeMond in 1986 after attacking madly in the mountains, while team time trials have often allowed lesser lights, a la Ramunas Navardauskas at the 2012 Giro, and Victor Hugo Pena to 'mind' the jersey for their leaders.

In that sense Gerrans is doing it in reverse, the more senior rider allowing the junior an honour few would share. His friend and colleague, now with the chance of a lifetime, a responsibility Impey will relish taking into tonight's, and possibly tomorrow's stage into the Pyrenees.

Coincidentally or not, Impey wearing yellow has allowed Orica-GreenEDGE to dominate another media cycle, another 'first', without it actually doing anything, and Gerrans, who would've looked great in yellow for another day, comes up a hero after what's been received universally as golden gesture.

Let's not beat around the bush, this was clearly media managed, Orica has even admitted as much. But it still doesn't dull Gerrans's sacrifice or Impey's achievement in assuming yellow.

What it does do is take the spotlight away from Gerrans ahead of an excellent chance to win his third career stage tonight, in Albi. Without yellow, he can again slip through the bunch with the cloak of relative anonymity. He won't be forgotten, but he will be out of sight and out of mind, if ever so slightly. He has the form, and the team's on cloud nine. Just saying.

What's on the menu for Stage 7
It's a medium mountain day for a reason, the bumpiest we've had so far in this year's Tour - neither hard nor easy. After leaving Montpellier there's an undulating 94.5km before the summit of the Col de la Croix de Mounis (809m) which will be fodder for breakaways, but once the escape forms the chase can look forward to a gentler final 100km, which will favour the peloton's chances of bringing things back together. The finish in Albi 205.5km from Montpellier is preceded by a near constant downhill run from 34.5km out and will allow the remaining sprinters in the front group to shake the lactic out of their legs before a possible bunch dash on the 1.4km finishing straight of the Avenue Albert Thomas. 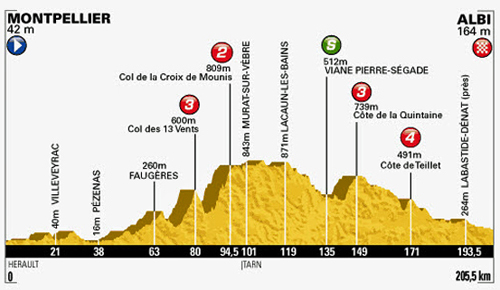 What to expect
As in Stage 1 in Corsica, this stage is split into two halves and the way the first 100km is rode will dictate just how much of a selection there'll be at the finish. Can it be controlled? Orica-GreenEDGE will be doing it all it can to keep yellow for a fourth straight day, and take it into the mountains proper tomorrow, but it won't be easy. Today is the first day where weary legs, and some fairly serious climbing combine in a soup that should go down a treat for the opportunists.

Think Thomas Voeckler, Sylvain Chavanel, Simon Clarke (if he's let loose), Rui Costa, or Juan Antonio Flecha. If one of them isn't in the escape I'd be very surprised. Voeckler is a master of making breaks on days like these stick, but I wonder if he will be allowed to roam off the front so easily after his devilish antics in 2011 when he snuck into yellow under the radar only to keep the best riders in the world at bay and on edge into the final week.

If the break doesn't stick, the bunch shouldn't be bigger than 90 riders, the sort of sprint that would favour the Matt Goss of old, but more than likely maillot vert Peter Sagan. Philippe Gilbert (BMC), Edvald Boasson Hagen (SKY) and Gerrans also can't be ignored.

History & The Tour in numbers
Albi - Remember when? Today's finish was where Cadel Evans won his first Tour de France stage back in 2007. Well, sort of. Alexandre Vinokourov initially clocked the fastest time on the day, only to later test positive. Evans was awarded the stage retrospectively, but didn't get to stand on the stage winner's podium until 2011, the year he went on to win the Tour de France.

Stage 7 will be streaming live through the SKODA SBS Tour Tracker from 2200 AEST. Live broadcast on SBS ONE and SBS HD also begins at 2200 AEST.