Previous Next Show Grid
Previous Next Hide Grid
Image 1/
Video
Audio
It was like a scene from the Perfect Storm. An eery quiet, and a routine day. But something was brewing, and it transformed an innocuous transfer into one of the best days of the 2013 Tour, writes Al Hinds.
By
Al Hinds

The moment came shortly after this post from Movistar on its official team twitter account. In English, "Absolutely peaceful start to the day, Stage 13, 60km in, and the gap is 3min 50sec to the six escapees".

Pictured is Alejandro Valverde smiling, the team calm, and the race seemingly headed for formulaic scenario in Saint Amand Montrond. The break would be brought back, and a sprint, as with Stage 12, would repeat. But in a flash, things changed. For Valverde, inextricably.

The carnage that followed the 110km to go mark was nothing short of extreme. Omega Pharma-QuickStep (OPQS) put the foot down as the race changed direction ever so slightly and the echelons began to form almost instantly. For OPQS, it was an exhibition in what it does best.

Gert Steegmans, Sylvain Chavanel, even maillot blanc "Kwi" were in the their element, and it showed. Men who have cut their teeth on the cobbles and thrive in the blustery conditions of Belgium and northern France.

The peloton shattered under the team's pressure at the front, the only mild crosswinds, complemented by a tornado being whipped up by OPQS that broke the race to pieces.

If Marcel Kittel was even beginning to show himself as a worthy rival to Mark Cavendish in a head-to-head dash, the German still has much to learn when the going gets tough. The three-time stage winner was ejected early but that was only the prelude.

With 87km to go, Valverde punctured. Suddenly Movistar, a team that had done everything to this point perfectly, saw its race collapse. The peloton sailed away, and the Spaniard's hopes of a high finish in Paris disappeared as quickly as the air that seeped from his tyre. The planned assault on Ventoux lost its centrepiece, Valverde distanced even with a frantic chase to finish more than 10 minutes back. How fortunes can change in an instant.

But the blockbuster still had a few chapters left. Sky, already weary after several days at the front, and now down to seven men after Edvald Boasson Hagen's Stage 12 exit looked increasingly ragged. Belkin and Saxo-Tinkoff anything but.

For Saxo-Tinkoff, this was the moment it pulled off its first real coup de grace of the 2013 Tour. Michael Rogers, Saxo's captain on the road, called his team to the front to go full gas. Inattention and fatigue plagued most of the peloton but those who mattered made the ensuing split. All of Saxo, Cavendish and Peter Sagan, and Belkin's Bauke Mollema and Laurens Ten Dam.

Sky was broken behind, and Chris Froome left completely isolated as the Saxo train gained and gained. A minute by the finish, but a signal of intent.

What Stage 13 showed so brilliantly, was that no day in the Tour can be taken for granted, and that the battle for general classification honours won't be won for Froome or anyone else till the last rider crosses the finish line in Paris. Movistar has been taught a lesson, but still has arguably its best asset in Nairo Quintana in contention. Valverde has nothing to lose.

The final week will provide little relief for Froome and for Sky. Can it rally, can Froome hold it all together? A favourite to win last year's Vuelta a Espana, the Briton stumbled. Will the 2013 Tour provide a repeat? Contador's men will be throwing everything at him from here until Paris. The storm is only going to get stronger. And the Tour has shown us once again the there is no such thing as a fait accompli.

What to expect
Flip a coin. An outright break or a group of around 70-odd should contest the finish, the undulations too much for the pure sprinters to hold on but exactly the sort of terrain Peter Sagan loves. Cannondale will thus be counted on for much of the work at the front, as will Sky for Chris Froome, but the agitators will be many in number.

As the race enters the final 100km it'll be a really hard slog to keep things together. A day for the men that excel in the spring one-dayers and ideal for a select break to either extend its lead or simply form over the many bergs on offer. The trifecta of climbs after the Cote de la Croix Couverte looks tasty for the opportunists, and with Ventoux tomorrow, and a rest day Monday, there's no reason to hold back.

Guys like, Simon Clarke, Pierre Rolland, Juan Antonio Flecha, Thomas de Gendt, perhaps even Jens Voigt who we're yet to see push a pedal in anger, will all thrive today, but as I've noted it's really even money whether they can do enough to stay away. Today is hard, but it's not decisive. Then again neither was yesterday.

Might a GC shuffle again be in order? There's a possibility, particularly if Movistar are game. A good night of Tour watching ahead. 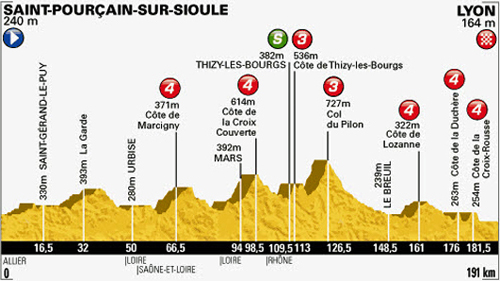 History & The Tour in numbers
Lyon, today's finish destination, was one of the host towns for the first Tour de France, which ran in 1903.

On offer for the riders on Stage 14

Green Jersey - 30 points for the first rider over the line, and 20 for the winner of the intermediate sprint in Thizy-Le-Bourgs. 50 in total.

Polka Dot Jersey - Seven categorised climbs, but nothing more than a Category 3. The number of climbs littered throughout today's stage shows just how hard today's stage will be.

Yellow Jersey - Who can say for sure? Few would have picked time being taken yesterday, but at least in theory Froome should stay in yellow. But you never know.

Stage 14 will be streaming live through the SKODA SBS Tour Tracker from 2200 AEST. Live broadcast on SBS ONE and SBS HD also begins at 2200 AEST.