Previous Next Show Grid
Previous Next Hide Grid
Image 1/
Video
Audio
The first two weeks of the Tour de France have been child’s play compared to what’s about to come, writes Al Hinds.
By
Al Hinds

Christian Prudhomme and Jean-Francois Pescheux should take a bow for the 2013 Tour de France course. Together they faced a daunting task, designing a Tour that would live up to its legacy, an homage of sorts to the 99 editions that had run before, and yet keeping the race open and exciting into the final week. It's been a delicate balance, but it's been pulled off perfectly. Until now the 100th Tour de France has been a spectacle more than worthy of its name, and things are only to get better.

The suspense, so crucial in keeping Tour aficionados glued to their screens has been ever-present, but it's poised to reach new heights in the final dash to Paris. The race's top-10 are separated by not much over five minutes, Chris Froome's team looks as broken as Sky's 2012 armada was strong, and there are some serious challengers waiting in the wings.

After the second rest day, the race could not be tougher. Every night, a stage in which massive body blows can be made on the race leader, the GC now looking as settled as school kids waiting for recess. The Col de Manse (Stage 16) is followed by a hilly time trial through Embrun, two summits of Alpe d'Huez (Stage 18), the Col du Glandon and the Col de Madeleine (Stage 19) before a summit finale in Annecy on Stage 20.

In Tours past, any one of these climbs could have been the centrepiece of the race's battle through the Alps. In 2013, they're all there, the only obvious exception, the legendary Col du Galibier, but hey, you can't have it all.

It's with all that ahead that Mont Ventoux, the Giant of Provence rears its ugly head, a shock to riders that the brutish climb will only serve as a prelude, an entree to the horrors of the final week. And what a prelude it is.

There are three elements to today's Ventoux excursion which will make it particularly special.

The first is the distance. At 242.5km not only is this the longest stage of the Tour de France, but it includes its longest climb at the end of it, the 20.8km Ventoux. However, it's the 221km before the race hits the base just outside Bedoin, that could prove the most fascinating. Even without Ventoux, any stage that's 200 plus kilometres, more than six hours in the saddle, and after two weeks of hard racing is going to be tough.

Almost like a runway before takeoff, the 'flat' section of the course before the beast at the end is a tactician's paradise. The right break with the right composition could see Movistar and Saxo-Tinkoff on the front foot early, and burn through Team Sky's arsenal before the climb to Ventoux even begins. Froome and Sky have a team that is best-placed in the mountains. But as Stage 13 showed, when Contador and Saxo pulled off their daring skirmish in the wind, the flat can't be ignored. Isolating Froome and putting Sky in the hurt locker before the Mont will be pivotal to both the stage, and Tour's overall result.

Second is the date. Bastille Day in France is a national celebration, and at the Tour it's met with bumper crowds, and a festival atmosphere. On Ventoux, for the 100th edition of the Tour de France, the fans will number in their tens of thousands. Some estimates are expecting the roads to be lined with up to a million people between the etape depart in Givors and the finish on Ventoux. That's going to literally suck the air out of the lungs of the peloton, inevitably escalate the spectre of incidents occurring with the crowd, and on the mountain, create an honour guard that will be unique to bear witness.

But Bastille day also means the French are going to go bananas. Every French team, and every French rider will want to be in the break, let alone win, and that promises a fast start to racing. It'll also mean some riders we've yet to see pedal in anger will be springing to the front, looking for some action. The peloton will be abuzz.

And then, finally, there's a mountain they call Ventoux. Alien, lunar-esque, personally I find it to be prehistoric. A relic of the past, left behind, as if stuck in time, standing alone in the Provence countryside. A mountain "without a range". The finale is where it's defined, that lifeless backdrop to the racing, which offers only the slim refuge of the weather station at the top. More than anything it's a climb I like to think of as no-nonsense.

The gradient, barring an 'easy' five per cent introduction out of Bedoin, that leaves the fields behind and enters the forest, the is an almost constant 8-9 per cent. No switchbacks, just a winding road that wants to defy gravity. The forest will shield the peloton from the sun, and wind (though conditions are expected to be unusually calm) ever so slightly, until Chalet Reynard, just past 1400m altitude where the road breaks out of the tree-line into the barren finale.

Like Ax-3-Domaines (Stage 8), only more than twice the distance, Ventoux will claim its victims. Tom Simpson may have died on these slopes in 1967, but many many more have collapsed or fainted, through fatigue, dehydration, or even through abuse of cocktails of who knows what. It's feared for a reason. Its brutal history, its imposing, intimidating stance over most of Provence and its unrelenting grades. The race will be shaken up tonight - and this is only the beginning of the end. 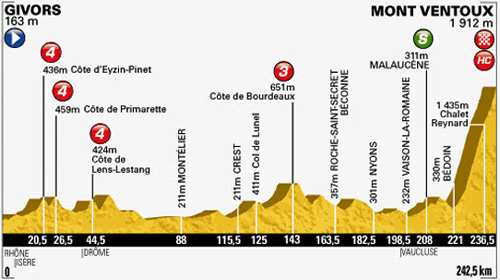 Contenders
If your name is Jean-Francois, Sylvain, Pierre, or Thomas, you love baguettes, and live in a country they call L'Hexagone, you're going to be up there. But French hopefuls aside, today should be a battle royale between the sport's elite climbers. Whoever wins the stage will be a sideshow to the GC tactics that play out on the slopes. Some say that Froome has already won the Tour, and he may well have if he can come through stages like today by further distancing his rivals, but I'm not sure that will happen.

Alejandro Valverde is a long way down the standings but is climbing among the best and is an obvious bet for the stage win. I'd pick Movistar to put Valverde off the front early and allow Nairo Quintana to sit behind Froome for the counter. Then there's the Belkin duo of Mollema and Ten Dam, how will they back up after the Pyrenees? Saxo-Tinkoff which now looks the form team, and outsiders, but champions nevertheless in Joaquim Rodriguez (Katusha) and Cadel Evans (BMC). One thing's for sure, Froome won't have many friends. 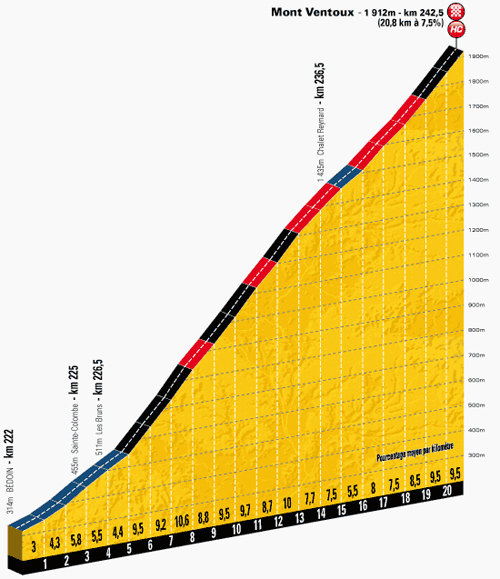 Pantani and Armstrong
It may have been drug-fuelled but Lance Armstrong and Marco Pantani doing battle in 2000 was a thing to behold. At the peak of their games, the two battled to the finish before Armstrong made a truce (contested) with Pantani to gift the Italian the stage. It was a classic.

History & The Tour in numbers
So much history, so little space. Ventoux has inspired, destroyed, and intimidated the very best since it was first introduced to the race in 1951. This will be the 15th time it graces the Tour de France.

On offer for the riders on Stage 15

Green Jersey - 20 points for the first rider over the line, and 20 for the winner of the intermediate sprint in Malaucene. 40 in total.

Polka Dot Jersey - 45 points are on offer today, largely from the double points on offer up Mont Ventoux where the winner will pick up 40.

Yellow Jersey - If Froome has felt battered on the Tour until now, Ventoux will do little to turn things around. Today could well be a fight for yellow from the gun.

Stage 15 will be streaming live through the SKODA SBS Tour Tracker from 2200 AEST. Live broadcast on SBS ONE and SBS HD also begins at 2200 AEST.