Previous Next Show Grid
Previous Next Hide Grid
Image 1/
Video
Audio
Alpe d'Huez. Just the thought of its 21 hairpins sends tingles down your spine. For the average weekend warrior, this is a cycling Mecca. Like stepping on to the field of the Bernabeu, playing a set on Wimbledon's Centre Court, or taking a walk through Augusta, this is as close as you can get to living, if ever so briefly, the pinnacle of the sport, writes Al Hinds.
By
Al Hinds

When Christian Prudhomme announced the Alpe would feature not once, but twice in the 100th Tour de France, in October of last year, I began to hatch a plan to ride it. To embark upon my own cycling pilgrimage, with the proviso of research, of course. And in June, shortly after the Criterium du Dauphine I finally managed to realise those plans, and a few of the other major alpine climbs.

If you've never been to the French Alps, the first thing that hits you is the sheer scale of the mountains. Like huge, forested walls that chaperone the snow-melt rivers and valleys below, the Alps are like nothing you'll ever see in Australia. Mount Kosciusko? Eat your heart out.

The drive alone from Grenoble, Geneva, or Gap is stunning, and by the time you reach Alpe d'Huez's unofficial base camp in Bourg d'Oisans, you're almost overwhelmed by the climbing possibility all around you. The Galibier, the Croix de Fer, Deux Alpes, the Madeleine, the Glandon are but some of the climbs in the immediate surrounds.

The funny thing is, the Alpe itself is hardly an impressive climb from afar. From Bourg, it's just a faint roadway etched, not even that prettily, into the side of a mountain. Compared to the Galibier, from the Telegraphe side or the Lauteret, it's unspectacular. From an altitude perspective it's lower than Ventoux, which starts far closer to sea level, and though steep, it's certainly not the hardest climb to conquer in Bourg, the French Alps or even to feature in the Tour de France.

So, a walk in the park? Hardly.

The Alpe
Perhaps the biggest shock is how steep the opening two kilometres are. Only a few minutes out of Bourg, through a roundabout around a 90 degree corner, and you're hit by the most brutal greeting a 13.8km ascent can give. The average gradient is 10.3 per cent, and boy does it completely demoralise you before the climb proper has even begun.

It's this section even before the hairpins properly start, that I was instantly in the red, and could intimately understand why the race up the Alpe is often won right there. Even the best in the world can make the mistake of going too hard in this early part of the climb, with unforgiving consequences.

Once the first hairpin comes, number 21, the first relief, and a 'gentler' 8.5 per cent as the climb settles into a slow hairpin countdown to Huez, and to the summit. Each turn becomes a blur, the names of past greats, Coppi, Herrera, Hinault, a reminder of the hallowed ground you're riding on, but little to quell the growing pain in your legs.

Although it's called Alpe d'Huez, Huez isn't even close to the climb's finale. The town, the first sign of civilisation, is still a good five kilometres from ths summit. If you think you're close to the top at this point, the rudest part of Huez is the 11.5 per cent sting it complements.

As you leave the town behind, the winter ski slopes open up above you, green fields in the summer, and open grazing terrain. The climb begins to ease, five per cent never felt so flat as after the 10 or so kilometres behind you. Through the masses, the cafes, and the overpriced gift shops, down, up right, then a final left turn and you're there.

Only this year you're not. With a second ascent of Alpe d'Huez on the menu, the race had two choices. Either the road toward the Col du Glandon before wrapping back around, or the somewhat more dangerous route down the Col de Sarenne. ASO went for the latter.

Col de Sarenne
Rated Category 2 in this year's Tour, the Sarenne is better known for the side the race will descend, normally a Category 1 climb. The descent however is one of the more technical, and unsavoury out there. Many have openly questioned its place in this year's Tour. But while the roads are sketchy at times, and there are some sheer drops off a few of the key corners, these are the best riders in the world. Finding the right line is perhaps less important as being sure of the surface beneath you. Even so, the descent isn't as crazy as some in the surrounding area, for example the Cormet de Roselend.

Alpe d'Huez 1 and Alpe d'Huez 2
The second time up Alpe d'Huez in tonight's stage is the normal ascent. 13.8km at 8.1 per cent. That's what I've described above. But the more astute among you will notice that the first ascent is only 12.3km. That's because the road to the Sarenne comes before the summit, chopping off the final, flatter 1.5km through town. 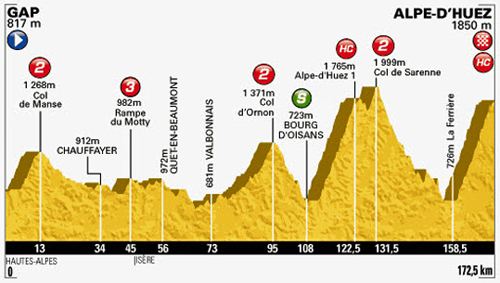 What makes it special?
Alpe d'Huez was the first climb to be used as a summit finish ever at the Tour de France. That was in 1952, when Italian legend Fausto Coppi won the stage. It kicked off an affinity with the idea of summit finishes, which have now become a regular occurrence across the Tour, but it's the Alpe that has retained a special place. As much because of its 21 switchbacks, the winners on its slopes, and the battles it's been the setting to as its difficult gradients. The legend persists in 2013.

What's going to happen?
A lot has been made of today's stage, the novel inclusion of twice up Alpe d'Huez, the headline-grabber. But this isn't even the hardest stage of the 100th Tour de France. Neither the Col de Manse nor the Col d'Ornon are particularly taxing climbs, which makes tonight's race all about the Alpe. That's no coincidence. The crowds will be as thick as Ventoux, but all the more vocal and more tightly packed.

Considering the Tour has only ever finished on Alpe d'Huez it's hard to know exactly how it'll be ridden on the first ascent at the 110km mark. Alberto Contador (Saxo-Tinkoff) and team-mate Romain Kreuziger are well-placed to try something, and will want to go early if they're to get any sort of real advantage.

Belkin's Bauke Mollema, not a noted time trial rider, suffered yesterday but still has hopes of a podium finish in Paris, as does Katusha's star man Joaquim Rodriguez. An uneasy alliance may form between some of them, but their difficulty is they're all as afraid of each other as they are of Chris Froome.

Froome (Sky) is in a league of his own at this year's Tour, but tonight's stage begins three days of incredibly hard racing that will test him all the way to Paris. One bad day will be enough for one of his rivals to pounce, but on current form he'll have a fear-no-rider mentality. Richie Porte will be close to the Briton at all times should he miss a beat, the Australian a beast on Stage 16 to Gap.

The one concern is how Nairo Quintana (Movistar) will attack the Alpe. The Colombian deserves a stage win, but equally will want to keep moving up the overall classification. From a spectacle point of view an early attack would be great, but I personally hope he keeps himself for the final ascent. He blew a chance on Ventoux, but a win on the Alpe would complete a memorable debut Tour for the 23 year old.

And old Cadel? Evans rode a sluggish time trial for a reason. He's going to have a go. Look out for him throughout the stage to get on the scoreboard for BMC.

On offer for the riders on Stage 17

Green Jersey - 20 points for the first rider over the line, 20 for the intermediate sprint in Bourg d'Oisans. Peter Sagan remains 99 points clear of Mark Cavendish in the race for green.

Polka Dot Jersey - 77 points on offer, 60 points for Alpe d'Huez(s). If someone wants to snag the maillot a pois, today's an excellent chance to do it.

Yellow Jersey - Massive day for the yellow jersey contenders. But so are the next two beyond. Spend your chips now and not have fuel for tomorrow? It's a fine balance, but parcours designed for attacking racing. Froome, 4min 34sec clear.

Stage 18 will be streaming live through the SKODA SBS Tour Tracker from 8.15pm AEST. Live broadcast on SBS ONE and SBS HD begins at 2200 AEST.