Previous Next Show Grid
Previous Next Hide Grid
Image 1/
Video
Audio
Even if Chris Froome (SKY) has a repeat of the fringale, the hunger flat, that blighted his ascent of Alpe d'Huez on Stage 18 in tonight's picturesque loop around Annecy, he'll still be hard-pressed to concede yellow. He's just too far ahead. The battle for polka-dots however is set for a far more interesting finale, writes Al Hinds.
By
Al Hinds

The final day in the mountains, the final stage of significance before the largely ceremonial loop around the Champs Elysees. Set in Annecy, perhaps the prettiest town in all of France, a fairy tale hamlet beside the azure waters of Lac d'Annecy, Stage 20 promises a visual feast of natural beauty at the very least.

For the tourists, and spectators along the course, this will be a stadium like no other, a fitting venue to close out the Tour's journey through the Alps. An oasis to sit back and enjoy this ongoing celebration of France.

But for the riders, it's an agonising final chapter to their Alp's adventure that comes after four hard days of racing through some of the most gruelling terrain to grace this year's Tour. Gap, Embrun, Alpe d'Huez, and yesterday the Cols of Madeleine and Glandon, it's been physically exhausting just watching.

So fatigued after yesterday's epic to Le Grand Bornand many riders struggled to be able to compose themselves for even a few questions to the media. Chris Froome was distant, Michael Rogers a shadow. But their pain is yet to be over. The summit finish at Annecy-Semnoz a final punch in the stomach to the Tour's peloton that has fought valiantly in making it this far.

Even so, yellow, seems a fait accompli. The relatively short distance will play into Chris Froome's hands. A five minute loss on the final climb really only possible if the Brit is sick, or injured on today's parcours. White, equally, with Nairo Quintana 10 minutes clear, is over, and Mark Cavendish's deficit to Peter Sagan is nigh on impossible to now be overcome for green.

Fittingly, perhaps, the king of the mountains, the maillot a pois rouge et blanc is still far from decided, and won't be till the top riders battle it out on the slopes of today's finish to the hors categorie Annecy-Semnoz.

Only 11 points separate the top five in the race for best climber, and there are 71 points on offer in tonight's stage. Ultimately, with 50 points available for the first finisher on Annecy-Semnoz, a stage win would be enough for any of Pierre Rolland, Mikel Nieve, Nairo Quintana or Christophe Riblon to snag the jersey off Froome's shoulders. The 21 points over the five climbs before that will also be fine and dandy assuming a break stays away to the finish. Whatever the strategy, it's up to the quartet of challengers to do something if they are to get their time on the Paris podium. Froome is after all, still the incumbent.

So who will win?

Mikel Nieve (Euskaltel), 98pts
The Spaniard is six points off the lead, building a hefty part of his advantage on Ventoux, and then consolidating it in the days since. Aside from Froome and Quintana, Nieve appears to be climbing the best of the candidates for the jersey, meaning he could gamble on staying with the best riders on Annecy-Semnoz, and go for the 50 point bounty at the finish. That's a long shot however and if he's playing a more calculated game he'll want to make inroads early. Euskaltel is still looking for a new sponsor and Nieve's jersey hopes could be the headline-grabbing performance the team needs to keep going.

Pierre Rolland (Europcar), 103pts
Europcar won this classification last year through Thomas Voeckler, but the popular Frenchman has done little of note in this year's Tour. Rolland was in the jersey in Corsica and has been one of the few regulars to be actively chasing it. He hasn't been climbing superbly, but he has been tenacious. Though he's in within one point of the lead, he used up so much energy in yesterday's stage the concern is fatigue will get the better of him today. 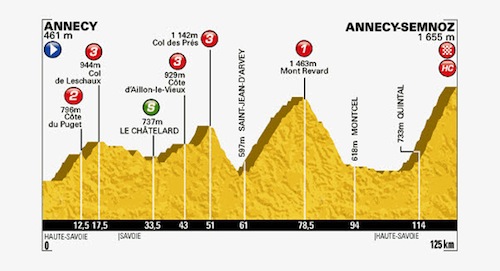 Christophe Riblon (Ag2R), 93pts
Having won on Alpe d'Huez, Riblon not only has turned the race around for France, and written himself into Tour folklore, but can rest easy in the knowledge his, and Ag2R's Tour has been a success. But 11 points is all that's keeping him from also jumping on the podium in Paris, alongside Froome, Quintana, and Peter Sagan. Like Nieve and Rolland his best chance is to pick up points early, his biggest problem is that if there's an early break both of the former will likely be there as well. 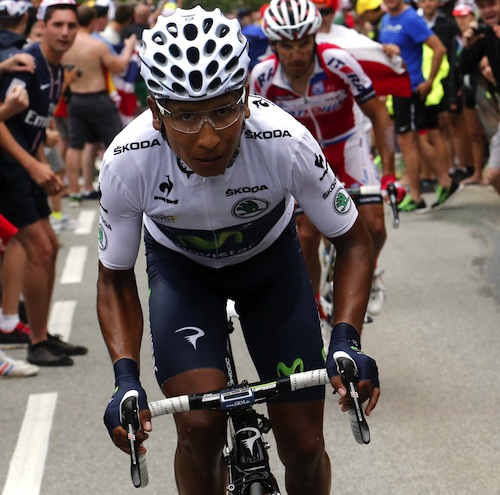 Nairo Quintana (Movistar), 97pts
The Colombian has won the battle of hearts and minds at the Tour de France, and already has white sewed up, but might he not also follow in the footsteps of a hero in compatriot Luis Herrera and take out the mountains classification as well? Quintana will be given no opportunity to go and take points early in the stage with his high overall position, but if he can out-climb Froome in the finale, even beating the Brit by a single place (assuming they're in the top-five) would be enough to leapfrog him in the polka dot standings.

Chris Froome (SKY), 104pts
The Brit is far less interested in defending his one point lead to Rolland than keeping yellow, but becoming the first rider since Eddy Merckx to wear both jerseys in Paris must be in the back of his mind. He won't be chasing points over any of the early climbs, though he may be tempted to have a go on the Cote du Puget if the race is still together. For Froome the most likely scenario to take points will come on Annecy-Semnoz, a chance if the GC riders, Contador, Quintana, Rodriguez are chasing the stage. Finishing in front of Quintana would keep him sitting pretty.

My pick: Quintana
I'm backing the Colombian lightweight for the stage as well, and if he wins that, he'll also do enough to take the jersey. He's been getting stronger and stronger as the race has worn on, and is going to be a real star over the next decade. He's been consistent though unrewarded thus far, and perhaps today he'll finally break through. A deserved winner if he can pull it off, but then so would any of the others.

On offer for the riders on Stage 20

Green Jersey - 20 points for the first rider over the line, 20 for the intermediate sprint in Chatelard. With a 102 point lead and only 105 points available Peter Sagan could still be mathematically overtaken. While a mathematical possibility it's incredibly unlikely for Sagan to lose his lead. For Mark Cavendish to get green, the Manxman would need to take points on the summit finish of the hors categorie Semnoz, take max points in every other sprint and prevent the Slovak from taking any.

Polka Dot Jersey - 71 point on offer, with 50 for the final climb to Semnoz the feature. See above.

Yellow Jersey - The yellow looks to be wrapped up. Chris Froome's five minute buffer should take a bit of pressure off heading into today's final foray in the Alps but it's still a hard stage, particularly the finish on the Semnoz. The race for the podium spots is still fairly open, a bad day for any of the top-five will be costly.

Stage 20 will be streaming live through the SKODA SBS Tour Tracker from 2145pm AEST. Live broadcast on SBS ONE and SBS HD begins at 2200 AEST.