Previous Next Show Grid
Previous Next Hide Grid
Image 1/
Video
Audio
It’s one thing to have the best stable of riders in the peloton, it’s another to convert that into success. For the third year running Orica-GreenEDGE delivered at the Mars Cycling Australia Road National Championships and while Simon Gerrans went into the race as an outright favourite on athletic ability alone, his second green and gold jersey was as much a result of well-played tactical game as it was raw horsepower, writes Al Hinds.
By
Al Hinds

As my colleague Phil Gomes opined Monday, Sunday's elite men's road race was one of the best in recent memory. The star power of Cadel Evans, Richie Porte, and Simon Gerrans lifted the profile immensely, the inclusion of a well-represented Drapac squad lit up the racing and injected a sorely missed balance to the contest, and the finale was nothing short of nail-biting. But what impressed me most was how cooly Orica-GreenEDGE approached the race.

With Drapac expected to throw down the gauntlet early, Orica-GreenEDGE had to be watchful, even with numbers, that it was never on the backfoot. And it wasn't. It matched Drapac's every move. The ProConti squad, which rode a brilliant race itself, was left no leeway and marked heavily throughout the 18-lap epic. When the early-break went, Drapac had four riders in it, but so did Orica-GreenEDGE. Drapac had one of its best hopes of success in the break in Wes Sulzberger, Orica-GreenEDGE had Simon Clarke.

But the tactical masterstroke was the gamble to bring back the 17-man escape late in the race. Whether Simon Clarke would have, or could have won the title on Sunday is a matter of debate. He was clearly one of the strongest in the front group, but in spite of his best efforts was unable to ride away. Once, twice, thrice Clarke attacked in a bid to break clear and win the national title, and every time he was pinned back. 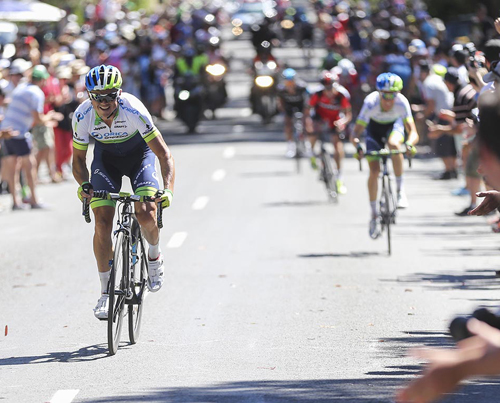 As it became increasingly evident that Clarke wasn't going to shatter the break, or distance himself from the Sulzbergers, Will Clarke or even a stoic Steele Von Hoff, Orica-GreenEDGE made the call to commit to the chase. Matt White, driving the team car, made the decision that on balance Clarke's chances though good, weren't the percentage play. It was too risky leaving it all to the Vuelta stage winner to convert, and White wasn't keen on overplaying the team's hand.

The team marshalled itself to chase, and in two laps, the breaks advantage disappeared. It was a ballsy call, and one that could have gone awry if Gerrans didn't deliver. Such was the faith the team had in Gerrans though, it was the correct decision to make. A case of the team goal, trumping the chances of the individual. Gerrans had a better chance beating Richie Porte and Cadel Evans in a small group than Clarke was ever going to have in a group of 17.

When the time came, Gerrans was comfortable the final time up Mount Buninyong, easily covering the moves of Cadel Evans and Richie Porte, and backed by a superlative Cameron Meyer, had only to be attentive in the final few kilometres with the knowledge he had the fastest finish.

It wasn't a formality, but it was a well-executed strategy that left little to chance. It was a reminder of what is often forgotten in cycling, and what makes this sport so great.

Too often pigeon-holed by the uninitiated as a solely endurance sport, a glorified ergo session designed to separate the fittest and the strongest from the rest, it's as much an exploration of peak performance as it is a chess game. A mental battle on two wheels. The subterfuge, the strategy, the execution, well it was exhilarating to watch. Gerrans was sublime, but such a perfect display of synergy and commitment from a team for a singular cause was just as fascinating to watch unfold.

Clarke's hopes of a maiden title were cannibalised by his own team, but that's sport, that's cycling. Individual sacrifice is what yields the greatest team success. And on current form, it's hard to bet against Orica-GreenEDGE going four straight in 2015.

What a race. Super proud of such an awesome @Orica_GreenEDGE team. 10 guys rode there hearts out for one goal and @simongerrans finished it