Unbalanced by a headline

Previous Next Show Grid
Previous Next Hide Grid
Image 1/
Video
Audio
If there is one thing cyclists understand it is that mass media have a long way to go in reporting and commenting fairly about the sport and activity.
By
Philip Gomes

Few articles are balanced, many are deliberately inflammatory while others are betwixt and between, often written by journalists who simply have no idea even though they often say that they themselves are cyclists.

But as cyclists we're used to that. Used to the misrepresentation, inflammatory comment and outright incitement.

And sadly when we in the cycling media write counterpoints to the mass media's often false narratives, we're just preaching to the converted.

The difficult task of shaping perceptions is left to those ill prepared to dig deeper, and often beholden to motoring industry advertising which supplies a large percentage of its cash flow.

But despite the perennial disappointment and occasional surprise we remain interested when we see cycling issues discussed. We still tune in or buy the paper because we want to see what we do validated in a wider forum, however flawed that idea may be.

Today, The Australian, took a stab at discussing cycling's place on our roads in its The Weekend Australian Magazine supplement. It's a very good piece, factual and sympathetic. Too bad it's paywalled because it deserves a wider audience.

And while some motorists believe it is renegade cyclists who are generally at fault in their own downfall - disobeying the road rules, running red lights and riding where they shouldn't - this appears, generally, not to be the case.

The Centre for Automotive Safety Research at the University of Adelaide examined the circumstances of every cyclist who'd come into contact with a car and been admitted to Royal Adelaide Hospital over a three-year period, from the start of 2008 to the end of 2010. Using police data, it found that in 79 per cent of cases the driver was at fault, with cyclists being responsible in 21 per cent of the accidents.

The study found young drivers under the age of 25, particularly young female drivers, were responsible for the most accidents (texting, perhaps?). The most common accident was a motorist turning right into the path of an oncoming cyclist.

However what was inside the pages of the weekend glossy was undone by a poorly crafted headline and cover. 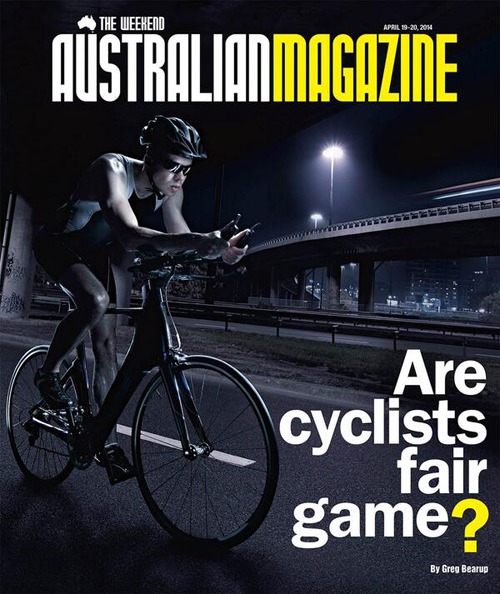 (Read this now - was the headline justified?)

Why does this matter if the article itself is excellent? Simple. Most people rarely get past a headline and abstract. And that's what many will see and read as they flip the page while sipping the morning coffee - cycling as dangerous with the roads a battlefield.

Now I get the why of the headline. Media is in the business of motivating its audience to consume its hard crafted content. A big splash and provocative headline does that. As an online editor I've written a few click-bait headlines over the years, I know what buttons to push but I also know which ones I shouldn't. This was a big button that should have been left untouched.

As much as the article sympathetically articulates the conditions in which we ride it would have been much better if it was complemented by a headline to match.

It was in the end a rare opportunity missed for a complete portrayal. Still that doesn't mean you shouldn't read it. In fact you should.