The five greatest climbs of the 2014 Giro d'Italia

Previous Next Show Grid
Previous Next Hide Grid
Image 1/
Video
Audio
From Hampsten's snow-covered ascent of the Gavia in 1988, to Pantani's win on the Montecampione in 1998, Al Hinds take a look at some of the legendary climbs of the 2014 Giro d'Italia and what makes them household names.
By
Al Hinds

Description
Even in the midst of summer, the Gavia rarely lacks a snowy cap, its 2618m summit keeping the best cold as well as breathless. Conditions prevented the climb's inclusion in last year's Giro d'Italia, but following a warmer spring it's unlikely to again be forced out, much to the chagrin of the peloton. It can be climbed from the south and north, although it's a coin flip as to which is easier. The 2014 route takes the climb from the south, which offers a gentler transition to the climb's toughest grades from its base in Ponte de Legno. On its own, the Gavia is an epic climb, a fixture of the Italian Alps alongside the Passo dello Stelvio, and Mortirolo. But this year its 1320m of elevation is just the aperitif to the equally difficult Stelvio and Martello.

The American dream, Hampsten conquers the elements
It was one of the toughest days in Giro history. Sub-zero temperatures forecast, a near whiteout over the summit of the Gavia, and Andy Hampsten chasing a maiden Giro d'Italia title. "All the riders went shopping that morning at ski shops and bought everything warm and useful they could find: Gortex insulated gloves, wool balaclavas, anything they wanted," Hampsten told Cyclingnews of that unforgettable day at the 1988 Giro. "I got a wool hat, a neck warmer and neoprene diving gloves; I had those on the whole way up. It was the only concession I made to the cold other than a very thin, long-sleeved undershirt." Hampsten, snow-crusted, crested the Gavia third, but the effort was enough to gain himself pink. He went on to win the Giro, the first, and only American to do so in the race's history.

Description
Starting from Semonzo, the climb's first 12 kilometres allow riders to find a rhythm, a more or less consistent 7.4 per cent from the valley floor punctuated by 18 switchbacks as the road winds its way to Campo Croce. The road before Campo Croce levels, if ever so briefly, as the climb crests its first act, and slips on to the ridgeline that takes riders up to the Cima Grappa. Here the climb starts to really extract a toll, the average gradient grinds to a more punishing 9 per cent, the pace slowing, and the effort far less forgiving. The town of Crespano del Grappa disappears beneath the riders' right
shoulders as the road disappears into the clouds. The finish at the Cima
comes after 19.2km. 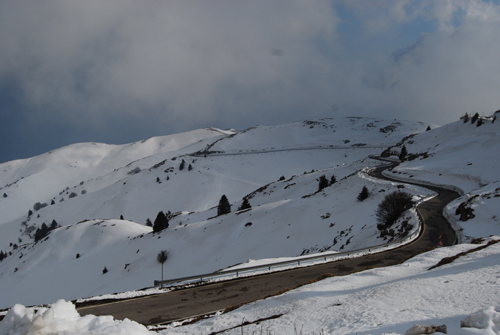 The Grappa introduces Nibali
Only three times before 2010 has the Giro d'Italia included the Monte Grappa, the first time in 1968, making its appearance still somewhat of a novelty at the Corsa Rosa. The last time it featured in 2010, Vincenzo Nibali, riding in the service of eventual winner Ivan Basso, announced himself as Italy's next big thing with a gutsy solo win into Asolo. Nibali rode the final 40 kilometres on his own in what was his first Grand Tour stage win. He went on to finish third overall, and notched his first Grand Tour title at the Vuelta later that year. 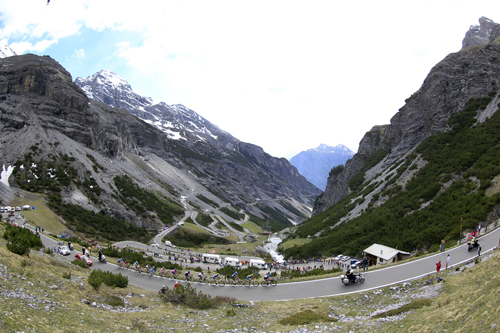 Description
The Passo dello Stelvio. Its snake like bends carved into the steep mountain face are as synonymous with the Giro as they are with cycling. But as picturesque as the view down its 48 hairpins may be, it's a climb that seemingly has no end. A relentless slog that finishes in the thin air of 2758m, the second highest paved mountain in Europe, and a cruel mountain to try and tame. Like the Gavia it's often cleared of snow only in the days leading into the Giro's passing, riders, climbing between walls of ice and snow, not an uncommon sight. The climb itself is legendary, whether taken from Bormio (shorter), the route this year, or from (the slightly longer) Prato alla Stelvio. To quote the Inner Ring; "This is a climb that is romanticised by journalists and rich in history but when ridden it's more grim treatment."

A history of tortured souls, and hard-fought glory
There are as many stories of the Stelvio as any climb, Basso's capitulation there in 2005 saw him lose 42 minutes, the maglia rosa and any hope of a maiden Grand Tour title; Fausto Coppi carved much of his success on the relentless climb's grades, and Brian Smith, in an interview with Daniel Friebe described the descent, as much as the ascent, a daunting prospect unto itself; "Your eyes are watering, you're freezing cold, but what I was told to do was to close one eye," Smith said. "The tunnels are unlit, and they're so long you can't see the end when you're inside: it's pitch black. It's disorientatingÃ¢â¬¦ It was the most horrible descent I've ever done," Smith continued. "I was never one to get scared on a descent. But coming down the Stelvio that day, with my hands freezing, having to close one eye for the tunnels, and then hope for the best once you were inside, is something I'll never forget. I was petrified."

Description
The Montecampione will this year come after a 205km in the saddle on the flat roads of northern Italy as the race traverses east, past Milan, and to the base of the high mountains. As Ventoux did last year at the Tour de France, the mountain will loom large on the horizon as the race approaches its slopes. Just under 19 kilometres of climbing, its 7.8 grade favours those who can hold a high threshold tempo. The briefest of respite at Alpiaz offers a few minutes recovery, before the road rockets up in the final four kilometres.

Pantani breaks Tonkov
Just 27 seconds separated maglia rosa Marco Pantani and Pavel Tonkov before the Montecampione stage of the 1998 Giro d'Italia, the Russian diesel having won the previous day to Passo di Pampeago to heap the pressure on the Italian.

In what would become one of Pantani's most iconic wins, the Italian repeatedly attacked a stubborn Tonkov on the slopes of the Montecampione before breaking his resolve with three kilometres to go, and seal the Giro title. It was Pantani's first, and only Giro d'Italia title. The climb's inclusion in 2014 is a homage of sorts from Giro organisers to the Italian, who died 10 years ago.

Description
As sadistic a mountain as any. The Zoncolan has been only a part of the Giro for a short time, it's a glorified goat track that tilts straight to the sky, especially for those that start from Ovaro as the Giro will this year. So steep is this beast, a climb paralleled only by the Angliru in Spain, it requires riders to stay saddled, less they lose traction and stall. 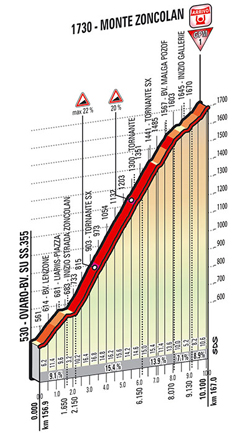 It demands a specialist gear ratio, a compact chainring is a must, and triples have even been fitted by some riders in the Monte's history. In four agonising kilometres, it never drops below 15 per cent, with peaks as high as 20, and 22 per cent in places. Only the featherweights thrive on a climb such as this, for the rest it's purgatory.

Simoni, the survivor
The Zoncolan takes casualties, left, right and centre, its ripping gradients even less forgiving to those that slip into the red, there is until the summit is in sight, no recovery, only the tap, tap, tap of more nails in your racing coffin. In 2007, the Giro raced the Zoncolan, for the second time, but the first from the more difficult side, from Ovaro. Gilberto Simoni crawled up the climb, averaging just 15km/h up its 10.1km to win the stage. It could very well have been a time trial, riders filtering in, in ones and twos, the backmarker, Eric Berthou, 20 minutes back.