Previous Next Show Grid
Previous Next Hide Grid
Image 1/
Video
Audio
After their phenomenal performance of yesteryear, the clock is ticking for Orica-GreenEDGE to repeat the feat at the 2014 Tour de France, or at least do something similar. They need not look far for a solution, writes Anthony Tan.
By
Anthony Tan

Time is running out for Orica-GreenEDGE.

There may be nine stages remaining, but if you accept it would require a minor miracle for them to win one of the four big mountain stages with a hilltop finish, then they are left with just five to choose from.

Without a pure sprinter, you can take away the final stage on the Champs-Ãâ°lysÃ©es, and probably Stages 15 and 19, too, to NÃ®mes and Bergerac, which leaves them with two.

And so long as current world time trial champion Tony Martin is in the race, you can remove the penultimate day's time trial.

Then there was one...

Stage 16, at 237.5 kilometres the longest day of the Tour, from Carcassonne to BagnÃ¨res-de-Luchon.

"Like I keep saying, I think we're doing everything right - we're just missing a bit of luck at this stage," Simon Gerrans, the team's marquee rider told Cycling Central in Oyonnax after finishing fifth, equalling his best result to date, to Stage 11 victor Tony Gallopin.

After Mark Cavendish caused both himself and Gerrans to crash on the opening stage to Harrogate, I don't think we've seen the Australian champion at 100 percent since.

Because in my mind, Gerrans at 100 percent, and this year in particular, is at the very least a guaranteed Tour de France podium finisher, and at the very most a stage winner; if you can win LiÃ¨ge-Bastogne-LiÃ¨ge the way he did this year, you can win a stage of a Grand Tour.

Andrew Talansky is a case in point of how insidious the after-effects of a crash can be, falling heavily on Stage 7 to Nancy, when he hit the rear wheel of Gerrans, then again the following day to GÃ©rardmer La Mauselaine. Yesterday, he finally pulled the pin on his interminable suffering, and the pit bull's Tour campaign was put down.

OGE head sports director Matt White was quite specific when it came to answering why his team were yet to come away with a trick. 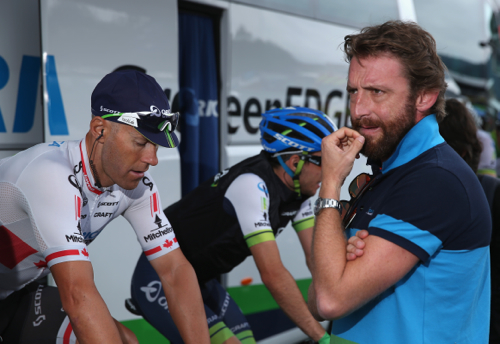 White: "We're one rider short in the final." (Getty)


"We're one rider short in the final," he told Cycling Central's Dave McKenzie in Bourg-en-Bresse, at the start of Stage 12.

"And that rider's either Daryl Impey or Michael Matthews. They're certainly two big losses."

Since the team's inception Impey, before he tested positive to banned substance probenecid at the South African road championships in February this year, has been a key rider for OGE, both as a protagonist in his own right and as a lead-out man. (For the record, he has denied any wrongdoing, but has nonetheless been suspended from racing.)

And Matthews, before he crashed in training the Tuesday prior to the Tour start in Leeds, was riding the crest of a wave of both form, confidence and success, having won two stages (including the team time trial) and enjoyed a five-day spell in the leader's jersey at the Giro d'Italia.

Perhaps they need to take a leaf out of the Omega Pharma-Quick Step book.

The Belgian-based team lost their main man when Cavendish crashed in Harrogate, yet as early as Stage 2, they regrouped to take third in Sheffield with Michal Kwiatkowski.

The next day, OPQS gave their all for Mark Renshaw, who went from lead-out man to lead man, where he too finished third behind winner Marcel Kittel. On the cobblestoned fifth stage, while Paris-Roubaix champ Niki Terpstra was disappointing, they nevertheless rode superbly to put Kwiatkowski into fourth overall.

Buoyed, the youthfully exuberant Pole tried to win the following stage to Reims with an eleventh-hour move, his team-mate Matteo Trentin slowing down coming into the final corner as 'Kwiato' took off, and although it didn't work out, Renshaw still managed a top five.

On Stage 7, they decided to back Trentin, who emerged triumphant in Nancy, denying eternal bridesmaid Peter Sagan in a photo-finish. Two days later, Martin motored all the way to Mulhouse in a day-long escape to claim the team's second scalp of the Tour.

Selflessly, and quite incredibly, Martin gave his all and more for Kwiatkowski the very next day on the mountain-laden road to La Planche des Belles Filles - driving the break up hill and down dale all the way to the base of the penultimate climb, and not once asked anyone other than himself to take a turn.

Unfortunately OPQS's GC guy didn't have the legs to finish the day off, but nevertheless it demonstrated the team's improvisatory raison d'Ãªtre at Le Tour.

They tried again in Oyonnax with Trentin, who, if it weren't for Gallopin's great late flyer, would've been battling John Degenkolb for the win, where he eventually ran third. The irrepressible Martin gave him a red carpet lead-out the following day in Saint-Ãâ°tienne but alas, the Italian didn't have the legs.

Nevertheless, OPQS has been MacGyver-esque.

What? You don't know who Angus MacGyver is?

Okay, it was make-believe, but MacGyver was knowledgeable, he was inventive, and he was resourceful. So popular was the show, 'MacGyver' was often used as a verb, meaning 'to do the impossible'.

Orica-GreenEDGE almost 'did a MacGyver' yesterday in Saint-Ãâ°tienne with Simon Clarke, who, to his credit, gave it a red hot go. But you wouldn't say it was MacGyver-esque in its application; it was simply putting a good man in a break and hoping for the best.

But with so few opportunities left for them in this 101st Tour de France, I can't help think they should have changed tack earlier and not simply waited for Gerrans to recover after his opening stage crash.

Also, when Matthews was ruled out, why didn't they substitute Leigh Howard or Matthew Goss as a replacement?

And when they saw Esteban Chaves prove his worth at the Tour of California and Tour de Suisse by winning a stage in both, why not whet the Colombian's taste for Le Tour, even for a fortnight? Or perhaps put Cameron Meyer or Pieter Weening in the line-up instead of Canadians Svein Tuft and Christian Meier, who have been largely invisible to date?

Yes, they haven't always come away with a win, but if they hadn't 'done a MacGyver' virtually each time they tried, OPQS likely would've come away with nothing.

Martin winning the Bergerac time trial is about as close to a fait accompli as you're going to get in this Tour, so for a team to lose its leader on Day 1 and likely still come away with three stage wins, there's surely something in that.

And for the men of Orica-GreenEDGE, something worth looking at, and possibly trying to replicate before too long.

Because at least as far as this Tour's concerned, they may only have one chance left.