Previous Next Show Grid
Previous Next Hide Grid
Image 1/
Video
Audio
Asks Anthony Tan, has the inexorable rise and rise of 'the Mamil’ killed the working class ethos of cycling, and is such blatant conspicuous consumption destroying the sport’s identity as the great leveller?
By
Anthony Tan

They're rich. Many, very rich. They have some of the best bikes money can buy. They buy the glossiest of glossy magazines. They watch the Tour religiously. They're middle-aged. They're in lycra - only the best, of course.

Yes, they're Mamils... Middle-aged men in lycra. And they're an advertiser's dream.

But are they killing cycling's soul?

My cycling tale is a relatively old though not unfamiliar one. After trying a friend's to see whether I liked it enough, I bought my first proper race bike in 1991, while living and studying as a student at the University of Wollongong, enrolled as an undergrad in their Bachelor of Commerce program. It was a second-hand job, although in excellent condition, which bothered me not in the slightest, since I, like most 18 year-olds, did not have a lot of disposable income, nor a lot of income in general, for that matter.

It cost about $800 from memory, and once kitted up with a pair of shorts, jersey and shoes, my budget had tipped just over the thousand-dollar mark. Back in the day, for someone my age - or any age, really - a significant investment in a nascent hobby.

For the first six months I would wear my shorts and jersey twice before washing them, since I only had one of each and did not want to wear them out.

I knew I did not have the lightest bike (it was around 11 or 12 kilos) or the best components or the best clothes or the best whatever. It did not bother me - not in the slightest. I felt that, as a newbie to this sport and yet to develop a decent engine and learn its plethora nuances, I did not deserve any better.

Living in the blue-collar hub of Wollongong on the New South Wales South Coast, I learned much of what I now know about the bike by training and racing with people from working class backgrounds. Salt of the earth folk; you know, your no-bullshit, tell-it-like-it-is variety. I loved these people for their candour and lack of pretension, and still do.

Growing up, my parents often told me to be happy with what I've got. They weren't saying don't be ambitious; more don't be greedy or ostentatious, for gluttony will lead to indigestion of the mind and no-one likes a show-off.

Together with a studying full-time at university I rode as much as I could; sometimes too much, to the detriment of my academic performance. But I couldn't help myself, such was my love for this sport that, as the days effortlessly progressed into weeks and weeks into months and months into years, opened my world up to umpteen places I never imagined I would have gone, and had it not been for the bike, likely would still not have got to. 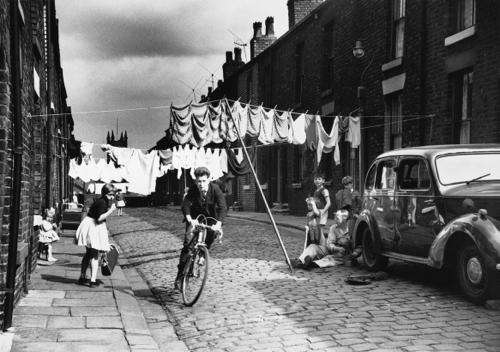 Cycling was once a pastime for the working class, or a mode of transport for those who could not afford to travel by car. The photo was taken in a terraced street in Manchester, United Kingdom, in 1962. (AAP)


In 'Easy Riders', the blog I wrote last week, I was heartened by what I saw from the commuting crowd, for they care more about the journey and where they go rather than what they ride. Don't get me wrong, it is lovely gliding along on a well-oiled machine and the bike is an integral component of the journey on wheels, but surely it isn't the most important part...

Outside of those who use bikes predominantly for transport, over the past two and a half decades, I've witnessed a change in the air of the average cycling customer.

For a number of reasons there appears to be less children on bikes (more on that in another blog). Yet bike sales have been rising year on year - even past the rate of inflation.

They have been replaced by Mamils. Mostly male. Mostly well-heeled. Mostly, from the corporate world.

There is nothing working class about them. Within the suburban peloton the working class element is an anachronism, for the most part. Cycling is now seen as aspirational. And when it comes to purchasing decisions about the bike, the lighter, the more bling, the more expensive, the better, it seems.

As noted in a story in the London Telegraph a few weeks back, headlined 'Why are bikes so expensive?', 19th century American economist Thorstein Veblen, one of the first academics along with Karl Marx to define consumerism and the rise of what he called "conspicuous consumption", argued the pursuit of status through material possessions was one of the great social evils of his time.

Extending Veblen's theory into the present, outside of the commuter posse, the bicycle is no longer seen as a mode of transport but like the modern-day motor vehicle, a status symbol. When it comes to what I will term 'The Aspirationalist', the higher the price, the greater the demand.

I wonder whether, in this pursuit of "conspicuous consumption" and the jettisoning of the working class ethos of the bicycle in First World society, we are losing part of what made riding a bike so special for me in the first place, and in turn, losing those who would like to ride but feel they don't meet the financial criteria to fit in, or turning off those who, every time cycling is pronounced as 'the new golf', find such a phrase anathema to them.

Has cycling gone from being a fun and affordable pastime to a playground for the nouveaux riches? And has the bicycle's working class ideology become anachronistic?