What’s required to ride the Croc?

Previous Next Show Grid
Previous Next Hide Grid
Image 1/
Video
Audio
Completing the Crocodile Trophy is less about superhuman feats of courage and fitness, and more about curiosity and determination, writes Kath Bicknell.
By
Kath Bicknell

The Crocodile Trophy is an event I've followed from afar for years. Its current format sees riders take on nine stages over nine days, most of them around the 100km mark.

I've always imagined that if I did the Croc one day, I'd do as much as I could beforehand to reduce the suffering. I'd train the house down to give myself the best chance of covering that many kilometres in a reasonable time. I'd spend a heap of money on a comfortable, light weight race bike. I'd invest in the best knicks on offer to get my backside through all the sweat and corrugationsÃ¢â¬¦

This year I found myself on the start line for stage one and two. This two-day teaser, "A Taste of the Croc," is run by the Cairns Mountain Bike Club. It's a chance to sample the course and the suffering, elbow to elbow with the 93-strong field who signed up to ride 770km over the full nine days.

These first two days got me thinking. Yes, it was tough, but not extraordinarily so. The nine-day pace of the top women is much more realistic than the one-day marathon pace they'd sustain in a shorter event.

More comforting still was observing the riders further back in the field. It's not as lonely back there as I thought, nor is it as over-prepared. Some of these riders were using heavier, more stable trail bikes, rather than sub-10kg race bikes.

There were a lot of riders pushing their bikes up hills and friendships were formed while people rode or walked together or chatted at the feed zones. These people gritted their teeth, kept pushing forward one section at a time, and hoped to get to the finish line while discovering Australia from a different perspective.

The longer I reflect on those two days in Tropical North Queensland, the more my list of 'what it takes to complete the Crocodile Trophy' is more about character than calf strength. Yes, preparation will reduce the suffering. But if you're considering chasing the Croc one day, I'd put the following in your suitcase as well: 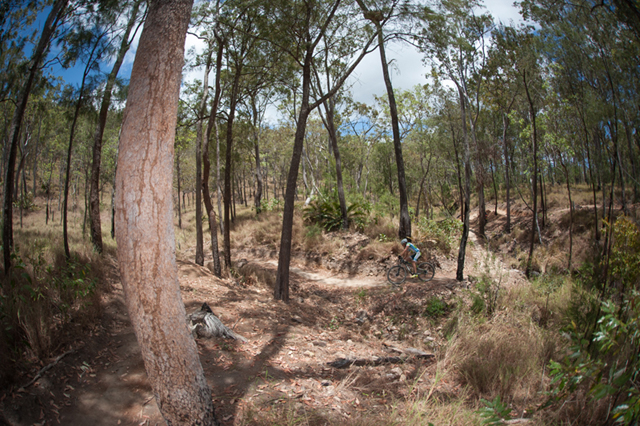 
Curiosity. Long stages mean constantly changing terrain. You need to be genuinely curious about what lies ahead and the changing landscape you pass along the way. This is not a race where you zero in on the trail, the stem or the wheel in front. It's far more enjoyable if you lift your head and look around.

Patience. Nine days is a long time. A lot can go right and a lot can go wrong. There were a lot of mechanicals in the singletrack on day one from riders who were too hasty from the outset.

A broken wheel will cost you a lot more time than extra braking behind a slower rider in a corner. Likewise, when you do have that bad day, don't beat yourself up about it. It'll pass. The terrain you see and friendships you make will be the reward.

Flexibility. A flexible body (or a good stretching program at least) will help you get through 770 kilometres on the bike. Mental flexibility is important too. If you can adapt your race plan on the fly, you'll cope better with the stress of the race, its unexpected twists and turns, and something called 'Croc Logic.'

Croc Logic means things like the third feed zone on day two, which the map indicated was half way up a 20km climb, might not appear until you're at the bottom of the descent on the other side of it. Riders who adapt to variability cope far better with the event as a whole.

Intrinsic motivation. There aren't many people who can get through a challenge like the Croc driven by external rewards, such as money or winning, as their prime motivation. You need to do it for your own reasons: to see the landscape, to experience the journey, to push through the suffering, to meet other riders, to see how you cope with each challenge as it unfolds.

Doing the event for your own reasons will give you a lot more motivation to draw on when things are tough and a lot more joy as each kilometre passes under your tyres.

An open mind. One of the joys of a race like this one is that riders from so many countries come together, and so many physical and mental challenges will present themselves along the way. An open mind helps each rider to learn more, stay motivated, to be patient and flexible, and to let curiosity be as much of a guide as pure grit or determination.

This is a race about the journey, not the destination. Keep an open mind, and that journey will be all the richer.

As I follow the news updates from the race I respect the people leading the race, but it's the riders spending more time in the saddle that I look up to most. They're the ones who know the route to the finish line is about the experience as a whole. They know it's not easy, but, like almost anyone lining up at a start line, easy is not the reason we do it.