Well for starters, my first thought was "probably watch Family Feud", but your personal taste may vary, so who I am I to lecture you for watching anything other than the fine offerings at SBS.

To be honest I had a hard time getting worked up about this. Maybe because in watching the show I could feel my life force slowly ebbing away. It was a race against time. Would it end before I did?

In fact this was the first time I'd ever watched the show, thanks to the cycling Outrage-O-Meter. So well done cyclists for giving it a boost that it did not anticipate nor deserve. You were almost responsible for my murder.

The thing that struck me as amusing was how utterly incompetent the players were in articulating what annoyed them about cyclists. And for a moment I actually considered that a good thing, until I realised that these people drive.

In fact I'm willing to bet that cyclists themselves would have a better idea of what annoyed other road users about us. It pays to be self-aware, in fact that knowledge far too often saves our lives. 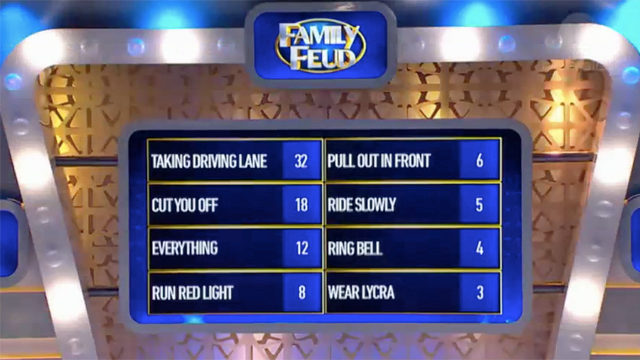 So what did we learn from the Family Feud focus group?

I'm sure that answer came from a question to be asked in their next show. "What's something annoying a motorist would do?"

We know they get annoyed about everything we do. Breathing wasn't on the list but it may yet be.

But I did not know they get annoyed when we ring our bells. So I did learn something new from Family Feud. Never use a bell.