Velo Files: Who Will Win M-SR?

Previous Next Show Grid
Previous Next Hide Grid
Image 1/
Video
Audio
Milan-San Remo is nothing if not long and unpredictable. Nonetheless, Anthony Tan looks at eight men who can cross La Via Roma's white line first in the season's first Monument.
By
Anthony Tan

Can you name another race where everyone from Mark Cavendish to Peter Sagan to Alexander Kristoff to Gerald Ciolek to Edvald Boassen Hagen to Tony Gallopin to Michal Kwiatkowski to Fabian Cancellara can win? 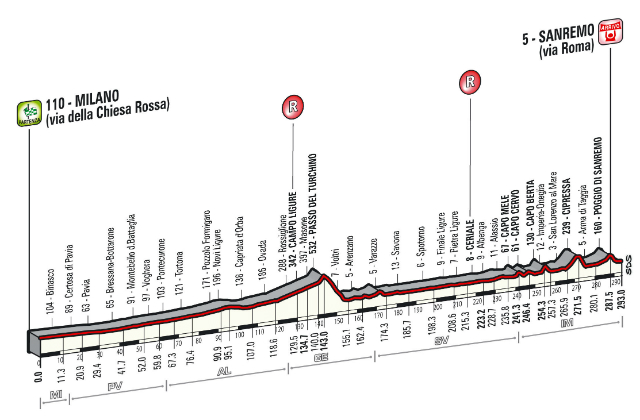 Take these comments from two of the pre-race favourites during Tirreno-Adriatico, the traditional stage-race build-up to M-SR. First, Signore Sagan, who finished second in 2013 (to Ciolek) and fourth in 2012 (to Simon Gerrans, who is still recovering from a broken elbow sustained at Strade Bianche and won't be racing):

Milano Sanremo never has a single favourite. You can never say who is going to win.

The return to the finish in Via Roma changes everything, although what it changes, we don't know. The weather is the crucial factor.

And there you have another X-factor. For not only is it unpredictable, its uncertainty often remains till the final kilometre - and sometimes, the last metres - exemplified by the 2009 edition, when Cavendish beat Heinrich Haussler (yet another name to look out for) by the width of a tyre - meaning that, for both rider and spectactor, patience is a virtue. Those athletes who keep their powder dry till the final climbs of the Cipressa and Poggio di Sanremo will be able to go with the main moves or save themselves for the bunch sprint; similarly, television viewers who pace themselves throughout - and for those of us in Australia, 10 hours ahead of Central European Time, prudently schedule a siesta Sunday afternoon - will be rewarded by being able to stay awake till the wee hours, and by wee, I'm talking somewhere around the 3:00 a.m. mark for Eastern Seaboarders.

(Potential Monday morning phone call: 'Yes, boss, I went out for some traditional Italian food - Ligurian, if you're wondering - Sunday evening and it must've been the dodgy clams, because I was up all night, and I really don't think I can make it into work today...') 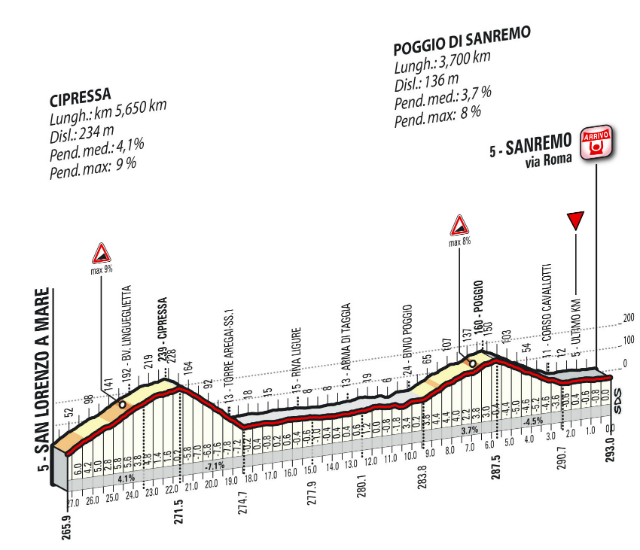 While M-SR rarely boasts an overwhelming favourite - and even when it does, rarely does said favourite win - there are a number of contenders with a better than average chance of adding 'la Classica di Primavera' to their palmarÃ¨s...

Why he can win: He's won before, he can do it again! Five wins already this season.
Why he can't: Since the start of the Spring Classics, successful as they've been, Etixx-Quick Step hasn't had everything go their way. Losing Tom Boonen another minus. Cav' not the indomitable force he was between 2009-13; picked up stomach virus prior to Tirreno-Adriatico, but should be okay Sunday.

Why he can win: Won in 2013, in good nick, and the only team to boast two former winners (he and Matthew Goss).
Why he can't: Inconsistent; doesn't win much.
What he says: "I have enjoyed some good results at Milan-San Remo winning the race two years ago and placing in the top 10 last March. This year we come back with a very strong team. We showed at Tirreno-Adriatico that we can play a lot of cards and we're definitely looking forward to it."

Why he can win: Strong early season form. Won Stage 2 at Paris-Nice, beating Arnaud DÃ©mare, John Degenkolb and Michael Matthews.
Why he can't: Length appears troublesome; Cipressa and Poggio seems to take bite of the Gorilla. Lacks dexterity required to hold position on descent of Poggio/run-in to finish.

Why he can win: Has the head (revels on centre stage); has the legs (five wins already!); is the defending champ.
Why he can't: Last back-to-back champion Erik Zabel (2000-01, 1997-98). Was somewhat a surprise packet last year; will be a heavily marked man this time 'round. 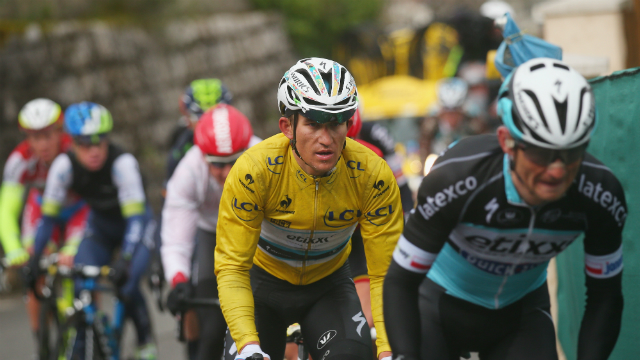 Anything left in the tank for Michal Kwiatkowski? (Getty)

Why he can win: Like MTN-Qhubeka, Etixx-Quick Step comes into M-SR with cards to play - Cavendish, Kwiatkowski, and Zdenek Stybar. In excellent shape, and always aggressive; can see 'Kwiato' in a break on the Poggio.
Why he can't: Went very deep at Paris-Nice; may not be sufficiently recovered. Out of two starts in M-SR (2013, '14), two DNFs...

Why he can win: In top shape and lead-out dialled, evidenced by Stage 3 win at Paris-Nice. Style of race suits 'Bling'. Daryl Impey will be key, to guide him from bottom of Poggio to finish.
Why he can't: Not as pure sprinter so needs a reduced group (30-40 ideal) to win, sans Cavendish and AndrÃ© Greipel; preferably Kristoff, too. Still a little green (pardon the pun) - only done M-SR twice (2011 - 107th; '14 - 78th).
What he says: "I think just having the right head on my shoulders, knowing that I will get through that pain and keep going is probably the most difficult part. I can tell the work that I've done is even a lot higher than what I had last year going into San Remo so I'm fairly confident." (Read full interview here)

Why he can win: Precocious beyond reason; form on the rise (beat 2013 M-SR champ Ciolek - the year Sagan finished second - to win Stage 6 at Tirreno).
Why he can't: Oozes confidence, yet stumbles a little in the Monuments. Not the most tactically astute. Tinkoff-Saxo more a stage race squad than one oriented to the Classics.
What he says: "I'm heading to Milano-Sanremo to deliver a top result just like at any other race. When the team or I start a race, the ultimate goal is to win. But in cycling you never know and you have to be realistic. It's a special and unpredictable race due to many factors such as the length of the race and the tactical situations."

Why he can win: Because love or loathe, there's no other one-day rider quite like him.
Why he can't: A month shy of 35, Valverde is beginning to show signs of wear; not the same power on climbs, not the same punch in the sprint. Has not ridden M-SR since 2006, where he achieved his best result of 24th (won by Filippo Pozzato).