Velo Files: Who Will Win Roubaix?

Previous Next Show Grid
Previous Next Hide Grid
Image 1/
Video
Audio
Likened to a 250 kilometre elimination race, Paris-Roubaix is, both literally and metaphorically, a last-man standing sort of affair. Anthony Tan surveys seven with the wherewithal to win 'The Hell of the North'.
By
Anthony Tan

It may be the only UCI race on the calendar to finish in a velodrome, but what really defines Paris-Roubaix is the cobblestones, or pavÃ©.

All up, 52.7km of bone-jarring (sometimes crunching), teeth-tattering (occasionally, shattering), and bike-bending (quite often, breaking) fun across a 253.5km parcours, making the composition of pavÃ©-to-tarmac a shade over 20 percent.

If one measures the percentage of pavÃ© from km 98.5, when the real race begins, to the finish in the Roubaix velodrome, the ratio lifts to 34 percent.

So, then, can anyone beat the Norwegian Flandrien?

Why he can win: Because he's damn good. Because his 81kg frame makes him made for Roubaix (more so than Flanders). Because he - and his team - is on a roll; Flanders and Roubaix is his 2015 season apotheosis, although he intends to hit another climax at the Tour and road worlds.
Why he can't: Because out of five attempts three times there's been a DNF next to his name. Hasn't yet mastered the pavÃ©. Best result 9th in 2013 (won by Fabian Cancellara).

I have never been in the first group at Paris-Roubaix so first I must be there before I can have a chance to win.

What he says: "I hope I can keep this winning streak going, but Roubaix is a different race and I've struggled there before. I don't see myself as the biggest favourite as I haven't performed there so well in the past, but we'll try. I have never been in the first group at Paris-Roubaix so first I must be there before I can have a chance to win. I always struggle more in the flat cobbles but this year I have very good shape so I hope I can be there until the final where I promise I would be dangerous. I am one of the contenders but there are many. It's one of the most beautiful races. It's so hard and you must play the cards right as well as avoid punctures at the wrong time. I hope I can win it some day. I am in good shape and Paris-Roubaix is the last race in this period, so I can give it my all and then rest afterwards." 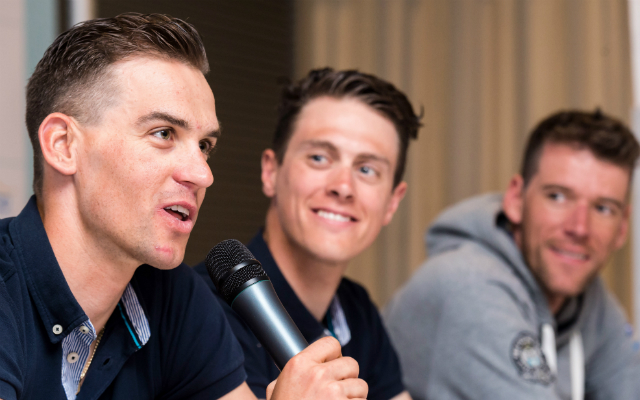 Why he can win: Because he's the defending champion, and in great form.
Why he can't: Because he's Meneer Twee so far: 2nd in Het Nieuwsblad, Gent-Wevelgem, and Flanders. Must be doing his head in.

We have a strong collective, just as last year, who can play several cards.

What he says: "The moment of winning Paris-Roubaix is still fresh in my mind. I felt really good performing recon (on Friday). It was good to feel the cobbles and get a good feeling for Sunday. I think my chances are pretty much the same as they were in the 2014 edition. We have a strong collective, just as last year, who can play several cards. At Paris-Roubaix a moment can change which card can be played. There are a lot of good competitors at this race as well. Alexander Kristoff has been the most successful as of late, but he is far from the only one who can win a race like Paris-Roubaix. Of course, the race is also missing riders like Fabian Cancellara, and my team-mate Tom Boonen. He's got great experience in this race. We could really depend on him in the past. He knows the tactics. But also, our sport directors have plenty of good experience and success at this race. So we can rely on their knowledge as we always have. I will ride the same Specialized SL4 Roubaix frame as last year. I'm excited about the opportunity to start on Sunday with the Number 1 on my back, and we will do our best to win this Monument once again."

Why he can win: Because he finished second last year. On par with Kristoff in a sprint at the end of a hard race.
Why he can't: Having won Milan-San Remo, he's at the tail-end of his form. Like Kristoff, because of his fast finish, Terpstra, Bradley Wiggins, Greg Van Avermaet et al. will try and flick him before the finish.

I am not feeling a lot of pressure because we already have a victory.

What he says: "I am really looking forward to this Sunday, and we will try to put in another great performance. I am not feeling a lot of pressure because we already have a victory. We worked hard to prepare for this classics period, which ends after Sunday's Paris-Roubaix. It is special for me to see how much effort and sacrifice the team puts into these races, and that motivates me to get even more out of myself. I am happy that this period is almost over, as it has been very challenging for me, both mentally and physically. At this moment, my form is still very good, as I have recovered very well from Flanders." 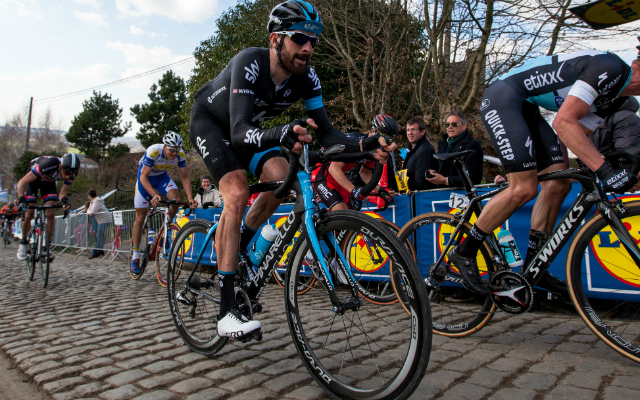 Why he can win: Because it's his last race. Because he showed last year he can be in the front group. Because he's eight kilos heavier than when he was when he won the Tour in 2012.
Why he can't: Because the cobbles of Roubaix don't give a toss about sentiment. Because neither he, Geraint Thomas or Ian Stannard have a fast finish, meaning that, in order to win, one of them needs to 'do a Terpstra' at arrive at the Roubaix velodrome solo (or launch a two-up attack). Because he chucks hissy fits during races.

It's a complete contrast to where I was last year. I know I can do it.

What he says: "My career finishes on Sunday, not before, so I need to focus on the race and not keep thinking about all the nostalgic parts of it. I'm just focused on trying to get my head in the right frame of mind for the race with no thoughts of afterwards, because that makes the job even harder. You can be in the best possible shape and finish last in Roubaix. It's really like that. You can have a puncture at the wrong time, a crash, and it's over. It's a complete contrast to where I was last year. I know I can do it now. Last year, it was just a case of trying to confirm to myself I could do it. I feel I'm in a better place not only physically - I can factually say that I am - but mentally, too."

Why he can win: Because realistically, he's one of only three or four riders who has the form, strength and nous to beat Kristoff. Because he has a solid team to support him: Daniel Oss, Manuel Quinziato, and Marcus Burghardt will be key to his success.
Why he can't: With his lighter frame, he is better suited to Flanders than Roubaix.

They are predicting dry conditions, which should be good for me...

What he says: "They are predicting dry conditions, which should be good for me, so I am looking forward to it. I have recovered pretty well from Flanders and my shape is still there, so I hope to do a good result Sunday. For me, Roubaix is is one of the hardest races of the year. I always suffer a lot in the last kilometers towards the finish. It a special race where big engines and heavy guys can go from far away all the way to the finish." 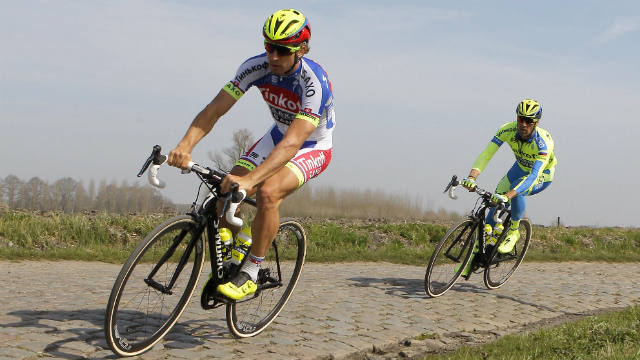 Get the monkey off my back! (AAP)

Why he can win: Because people have stopped talking about him; he's now an outsider.
Why he can't: Because for one reason or another, he just can't seem to get it all together on the day. Form is there, confidence is AWOL.

If I have the (right) day, I think that it's possible for me to take part in the finale...

What he says: "For me there's no doubt that Paris-Roubaix is an iconic race, the Queen of the Classics or Hell of the North depending on your perspective. It's always a very tough race and luck is an important factor as much can happen. You simply need to have a bit of luck in order to avoid crashes or unfortunate injuries. It's so unpredictable. However, I feel in quite good shape and I've been in the mix in the final part of Paris-Roubaix before. In the last races, I have been at the front but there was always something missing for me to win. My shape is quite good and I need to have confidence combined with luck and ride the race from the front in order to minimise what can go wrong. If I have the (right) day, I think that it's possible for me to take part in the finale of Paris-Roubaix." 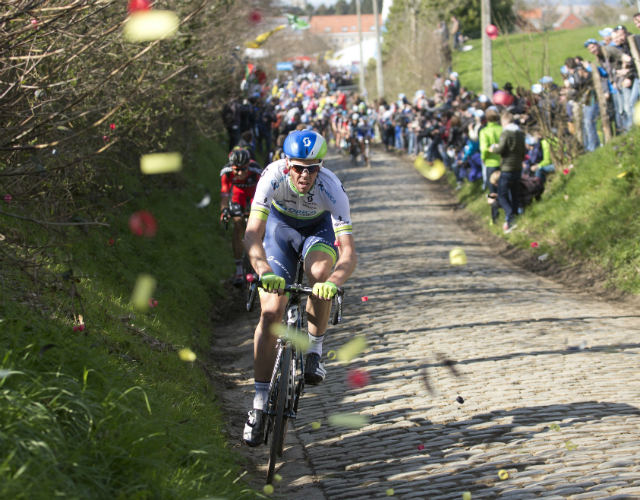 Why he can win: Because Roubaix is his race (2015 will be his 14th attempt; has finished all editions but was hors delai in 2002). Because he's been up there before (8th in 2012). Because he has an entire team to support him.
Why he can't: Because even though he's been there or thereabouts, he's never been in a winning position (in 2012 he finished in a group 3'31 behind Tom Boonen). Because even if he makes said winning move, he lacks a sprint. Best bet is to 'do a Vansummeren' (winner in 2011); go in the early break and be last man standing.

SBS will broadcast Paris-Roubaix
live on Sunday 12 April: from 2130 AEST on SBS ONE for Eastern states,
South Australia and Northern Territory, and from 1930 AWST on SBS2 for
Western Australia. The race will also be streamed live here on Cycling
Central.