SBS Food Journey Festival 2011 is about multi-cultural food journey and is held at the Royal Exhibition Building in Carlton. As a guest food blogger, it was my task to try six new foods I'd never encountered before.
By
Penny Cai 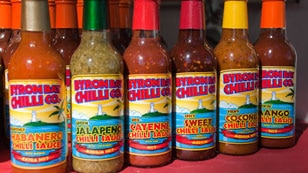 I tried all six of them and my personal favourite has to be the Heavenly Habanero Chilli Sauce with Mango. What makes this special is its addition of mango. Most grilled seafood will go very well with this hot sauce. The touch of sweetness certainly heightened the spiciness of the sauce.

A close second is the best selling Fiery Coconut Chilli Sauce with Curry and Ginger. It reminded me of Thai sweet curry sauce. This ingenious concoction beat 750 chilli sauces and nabbed the grand prize in the 2007 American Scovie Award in New Mexico. Bush tomatoes or Solanum centrale are originally found in very dry areas of Australia, and have a very strong flavour and scent. Greg Hampton of William Angliss made me rub some crushed bush tomatoes in my palms and then smell it. The scent was intense, quite like tamarillo, actually. Most bush tomatoes are sold dried. To use this, pound the dried product into a fine powder. Add it to stews or soup to enhance flavour.

The sunrise lime is pear shaped and a bright orange colour. It is a cross between a calamondin (mandarin crossed with cumquat) and a native finger lime. I can definitely taste the cumquat and the flavour is intense – sweet, sour and finished off with a hint of bitterness. This delicious lime can be made into marmalade or even syrup to drizzle over fruit cake. Delicious! I had to try the Maple Walnut flavour, which is one of the Top 3 best sellers in Australia. I could see ripples of Canadian maple syrup across the creamy Swiss ice-cream, plus a generous scattering of sweet caramelised Californian walnuts. It’s creamy, sweet, sticky, crunchy and nutty. I henceforth declare this my new favourite flavour from MÃ¶venpick.

It’s good to note that only natural ingredients are used in MÃ¶venpick ice-cream. The company has nine parlours in Australia and a flagship store will open at Doncaster Shopping Centre, Melbourne, around May 2011. 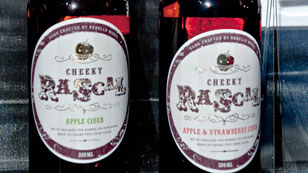 The Rebellos are well known for their two-fruit wines – Charlotte Sparkling and Strawbellini Moscato. The strawberries used are from the infamous Sunny Ridge, Victoria. It turns out making cider was a natural progression.

The apple cider has a nice apple aroma and the taste is crisp, clean with a slightly dry but refreshing finish. The strawberry-and-apple cider is very lively and fruity in aroma. It had a darker colour and I love the taste. So what is the rebellious nature of this cider? Yes, it’s the addition of strawberries, but also the use of Pink Lady over traditional apples.

Cider can also be used as an ingredient in cooking. Instead of using wine in tomato-based pasta sauce, I use apple cider. I even use it in pork stews. It’s a lovely ingredient to play with. Cocolo Chocolate is Swiss brand which makes chocolate using organic Fairtrade cocoa. It contains no refined sugar and the 70 per cent dark chocolate is its top selling variety. I bet it makes great brownies and chocolate fudge cakes! The key to a good chocolate dessert is the chocolate, so use the best stuff you can afford.

Of the eight flavours I tried, the dark mint chocolate was an absolute stand-out. I was told that the mint oil was made into peppermint crisp, which is then encased in smooth chocolate, hence the rather different but luxurious texture. It seems like the perfect after-dinner indulgence. The range of products uses local ingredients, like Rich Glen olive oil, local beeswax, cows’ milk from Boosey Creek Cheese, and pure honey. Sue Mosdall, the owner of Daisy Cow, has also started experimenting with local grape seed oil and working with wineries like Monichino wines to come up with ideas and methods of using grape seed extraction as preservatives in their products.

Why we should all be embracing seaweed
8 hours ago
Meet the perfect fusion that is salt and pepper chips
9 hours ago
How angel wing pastries helped this Polish-Australian to dance
12 hours ago
Life in a blue-collar, Baltic, potato-loving household
1 day ago
In Social