The neighbours probably think I’m running a new business. From the street all you can see of the house at night is a red light that glows in the mudroom. This, however, isn’t an advertisement for personal services. A red light is apparently the best way to keep my week-old chicks alive – the warmth from a high wattage lamp acts like their absent mothers, the red globe helps to prevent them pecking each other. Their skin is translucent and where feathers are due to form you can see the pumping of blood, which to a young bird’s eyes must look a little like a worm.

I have the cutest, fluffiest, fragile looking chickens imaginable, the first true livestock on the farm. Tiny, old breed, utility chickens; the sort that lay a fair amount, but are also good to eat. The perfect breed for a smallholder like myself, because the ones that aren’t female, that won’t be kept for laying, they can be fattened for the pot.

These are Barnevelders; gorgeous double laced black and brown birds that lay a spectacular speckled egg. I bought them from the man who brought the breed back from the brink of extinction locally; Paul Healy, a breeder who has forgotten more about chooks than I’ll ever know. He reckons I’ve got eight chickens and two roosters. That means I’m rearing a good mob of layers, one rooster to look after them (they protect them from predators), and one for the pot.

I feel like a new parent, up each morning, counting heads, fretting about them when I have to venture away from the farm for any length of time. Scared that the lamp will blow and leave them chilled, or that their water will be fowled with chaff as they scratch to find food. They weigh next to nothing, all down and fine bones and beaks that’ll give any passing moth a go. 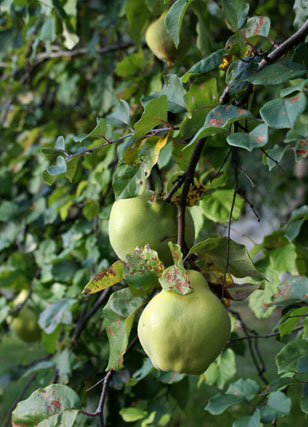 The numbers on the farm are growing. One dog. Two goldfish. Ten chooks. I did have a death. The first on the farm on my watch. A bandicoot, that long-nosed, very sweet marsupial that fossicks around the edges of the grass in the house block. Sadly one of them drowned in a fishpond.

Meanwhile the seeds of the vegies are valiantly pushing their way through the soil. Protected in their cage of chicken wire topped with netting, to keep the wallabies, possums and birds at bay. There are quinces, too, young and green and covered in an adolescent fluff on a tree outside the net. They’re fattening on the established tree I see from my kitchen window. It’s the only thing the possum doesn’t seem to touch; the lemon is stripped of leaves, so too the fruit trees in my own private orchard.

It’s okay, though, because apples fill the valley. Fat and red, or sometimes green, they brighten my mood and fill up the fruit bowl. I snaffle mine from roadside stalls, some crisp, some tired. Some old, unusual varieties such as Lady in the Snow or Geeveston Fanny, others the predictable Golden Delicious or Striped Fuji. They’re $2 a bag. Sometimes $3. I think the Cox’s Orange Pippin have been the best so far.

Why we should all be embracing seaweed
8 hours ago
Meet the perfect fusion that is salt and pepper chips
10 hours ago
How angel wing pastries helped this Polish-Australian to dance
12 hours ago
Life in a blue-collar, Baltic, potato-loving household
1 day ago
In Social