I’ve become a mushroom farmer. It seems the things that are growing best on the property are the slippery jacks that have forged their way through the ground under the trees that line the road. With their spongy gills, golden tops and affinity for pines, I know they’re edible. More than edible, they’re fantastic. I dry some, leaving them in the sunroom on wire racks after wiping them clean. Dried they become complex, intense and the aroma is mouthwatering. I can’t sit on the couch in the sunroom for a glass of elderflower cordial without wanting to cook up a mushie omelet.

There are plenty of other edible mushrooms around, too, for those who know what they’re doing. I’m finding plenty of shaggy parasols up through the paddocks. There are shaggy ink caps too, sometimes called lawyer’s wigs because of their rounded conical shape. These need cooking and I don’t eat them when I’m drinking alcohol.

Further down the road are saffron milk caps, a vivid orange mushroom that bleeds a golden latex when cut. Milder in flavour than some, but sturdier in texture, I braise them down with beef, or flavour them with plenty of parsley and some garlic and bacon. You can’t dry these, because the latex turns to rubber and the mushrooms become harder than a dog chew. 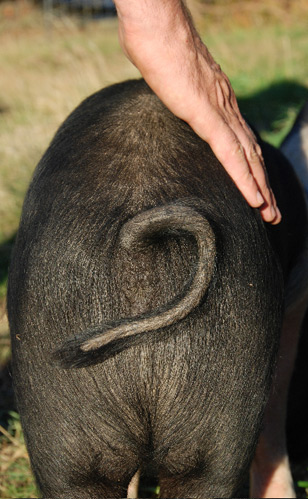 The reason we’ve so many mushrooms is the rain. It bucketed down a week or two back, overflowing the water tanks and soaking into the paddocks. Field mushrooms have sprung up in the grass, flourishing while there’s still warmth in the soil. There’s not enough warmth left to plant much else in the vegie garden. What I have is looking very good. The silverbeet is lush, the carrots and beetroot thriving. I have pert green stalks of brussels sprouts thrusting skyward and there are cabbage and kale shooting up from the soil. There’s also the shoots of a thing called mangelwurzel, a turnip like plant that I just love the name of and that I planted for the pigs.

Yes, that’s right, I also now have pigs. Magnificent black and white Wessex Saddlebacks. They’re an old, rare breed, with generously proportioned floppy ears and a striking white shoulder band. Just the two sisters, fattening in a newly fenced off paddock under the pines. I built them a shelter, as sturdy as a bunker. I put out a bath for their water, and have started sprouting the barley and foraging for windfall apples at feral trees in the valley. The pigs have grass to eat (and its roots to dig), a tree to scratch on and some serious new fencing that I had to get a man in to do; wire a taut as a strong man’s bicep that’ll help prevent the pigs from straying. My girls love being patted and stroked and I do it daily, though I often feel odd feeling their bellies for fat.

I find them endlessly fascinating, the way they frolic and play. The way they pile up on top of each other to sleep. The way they eat, greedily, yet surprisingly delicately. They can pick out one type of grain from another. I gave them names. Food names, because despite their good looks, despite their intelligent, playful nature, despite the fact I do enjoy having them here with me on Puggle Farm, they are one day going to be dinner. It’s a warm, welcome to Prosciutto and Cassoulet.

It took 3,000 croissants to perfect these pastries
1 day ago
Episode guide | The Cook Up with Adam Liaw | Episodes 76 to 100
2 days ago
Bringing the Australian cafe experience to the world
2 days ago
Make shakshuka while you sleep
2 days ago
In Social