Frost fills the valley, thick, white frost, which fits the cliché: a blanket. It swaddles the grass around the creek bed and sits fat and thick on the lawn. The cold freezes the cow trough, the chicken water, the gravity fed tap that I use to water the pigs.

I notice the pigs have a little sleep-in when it’s cold. Or unreasonably wet and rainy. They have the right idea, snuggled together in their crate that I fashioned into a home. It's a warm place, where two well-insulated black sows can furl up in the hay, far from the ravages of winter.

Inside my house it’s all toasty warm. Someone clever designed this house, putting the chimney, a heat bank, right in the middle of the cottage. Apparently it was a farrier, a man who looks after horses’ hooves, that built it. From the height of the barn, and the windows, and the chook shed, he wasn’t as tall as me.

I’m spending more time indoors, as you’d expect, using up some of the goodness stored in the pantry at the end of summer. My strawberry jam didn't set. The fruit was too ripe, which means it tastes fantastic, but it’s runny enough to slide off toast. Especially the well-buttered toast I favour in the mornings. Watery jam triggers a wonderful new tradition: Pancake Sunday, a day of fat pancakes served with preserved fruit from the pantry, organic jersey cream and lively with strawberry 'sauce’. I invite some neighbours over to celebrate. Other Sundays it’s friends. Visitors from Bruny Island don’t just come for dinner; they come for dinner, bed and breakfast. No nighttime ferries mean they can’t get home.

The neighbours live a variety of lives. Some commute to work in Hobart, some are trying to be self-sufficient. Most have land in this gorgeous, fertile part of the world because they want to grow things, to tend things. One cares for donkeys, another has what look like Angus cattle, a third has sheep of all shapes and sizes. There are plenty of cute, black faced suffolks along the road, and handsome alpacas give quizzical looks to all who pass. They say that alpaca wool is incredibly fine. When they fight (or is it mate?) they sound like banshees in the night.

Despite the possum damage, I can still pull a few sweet, dirty, impossibly crisp carrots from the garden. And the occasional beetroot. I make beetroot risotto, deep pink in colour, using chunks of beetroot and a stock from one of the roosters. If I had duck stock, I’d use that. A dollop of sour cream would enrich it, but my risotto, stirred from start to finish, doesn’t need that much fat to make it glamorous. All it gets is a little hail of finely grated local goat’s cheese and a hearty appetite. 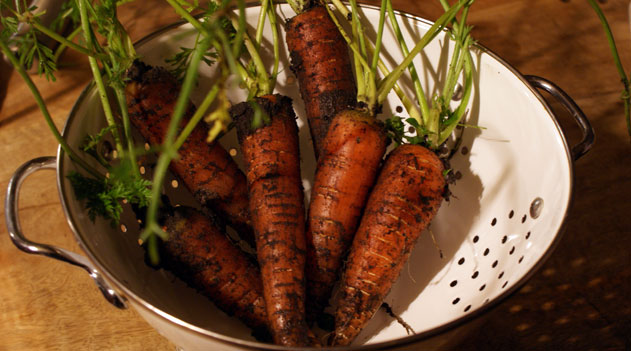 The days are at their shortest. The sun barely scrapes above the hills, disappearing earlier in the afternoon than I expected. The top paddock is growing a good layer of moss, the picker’s hut is usually in shade and there’s little that you can plant at this time of year that will thrive.

Tasmanians have an inherent awareness of seasons. You have to, as the seasons slap you in the face when they change, and planting a week on the wrong side can mean the failure of a crop. The two resilient crops that don't seem susceptible to the changing seasons are broad beans and garlic. One local tradition is to plant your garlic on the shortest day (June 21st) and harvest it on the longest day (Dec 21st). Some, however, say to plant at Anzac day and harvest it, well, sometime at the end of spring. I do some of both. I plant several cloves, two months apart at one end of the vegie garden. Possums don’t touch it, or the broad beans. It seems a long time to wait, though, six months, before it will be time to reap the rewards.

Why you should add Indonesia's soy-based tempeh to your dishes
1 day ago
Eight top chefs reveal their favourite ingredients
2 days ago
Pretzel base cheesecake with caramel apples
2 days ago
Amber Drop Honey: From a swarming hobby to a rescue bee operation
2 days ago
In Social