I started milking Maggie. What a joy. A classic, leggy jersey house-cow, Maggie is well trained to come into a barn forwards, and leave it backwards. She’s been trained to go the toilet before she comes into the barn. And she’s as calm as an autumn day when I try to get a rope around her neck to stop her moving too much when I milk.

Which means, in theory, that milking should be a breeze. Of course it’s not. I forget to wash her down the first morning so the milk is full of bits like hair and dried mud that stand out in the pure golden milk. (Maggie’s milk is golden, a far cry from the watery white look of the homogenised, standardised milk – an industrial process that makes milk dull - you buy in shops.) She doesn’t stand still, rather moves constantly, forward, backward, sometimes scarily sideways, too, if she doesn’t like the feed I’ve given her. Having all 600 kg of cow, all 275 litres of her gut, in the barn with me, is at once thrilling and terrifying. She’s the boss. I might feed her, tie her up, be trying to milk, but if she decides she’s had enough, I obey. Like a small boy trying to please his mum or dad.

The milk is miraculous. Such a joyous gift from the earth, thanks to Maggie and her calf Coco. Only one litre the first day, closer to two the second. Soon I’m getting about 3-4 litres a day. I take the calf off Maggie at night, letting Coco chew on grass for about 12 hours. I take most but not all the milk that’s come in the next morning. And pour myself a cup straight from the cow (after I strain it – learnt that lesson). I make yoghurt. I will make cheese. There’s a fat swadge of cream at the top of each bottle, rich but not cloying jersey cream. This is the stuff of dreams. And the taste of the milk? It’s sweet. It’s not overpowering. It’s like the first time you taste truffles, real truffles not truffle oil, and begin to wonder if the experience will be somewhat an anticlimax, until the true, complex, subtle flavour resonates. You can trap the milk’s best in yoghurt, though I do like the flavour of a cup of milk, just as it cools in the time it takes to sweep out the barn, check the chooks, and strain the milk into glass bottles that now fill the fridge. 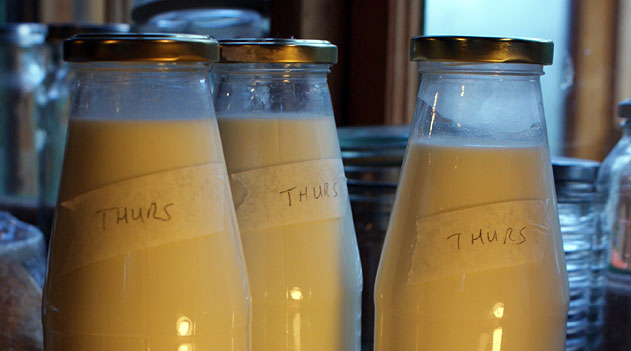 Nick and I are keen to go abalone diving. Of course we missed out on diving most of last summer, a time when your wetsuit keeps you toasty warm for over an hour and you feel like dipping your toes in the channel. Instead, of course, it’s cold and late in the year, and the water is about as chilled as it gets. Some say 8C. Abalone are powerfully expensive shellfish. Worth over $100 a kilogram live in the Asian market or in Sydney. But here, where each amateur diver can snare ten a day, they’re part of the eating culture. On Bruny they’re often minced and mixed with egg to make patties. Others slice them thinly and fry them on the barbecue for a few seconds. Others still take the whole shellfish and slap them on an iron grill plate. I have brought along my pressure cooker, a secret weapon in case the other cooking methods don’t work. I don’t like my abalone tough and chewy, and I learnt from a Chinese chef that the best way, he found, to get the flavour and texture he wants, is using the ancient Chinese technique of bunging them in a pressure cooker for 40 minutes.

Nick has other ideas involving a wok, sesame oil and a wood cooker. I’ll let him show me his way first.

It took 3,000 croissants to perfect these pastries
1 day ago
Episode guide | The Cook Up with Adam Liaw | Episodes 76 to 100
2 days ago
Bringing the Australian cafe experience to the world
2 days ago
Make shakshuka while you sleep
2 days ago
In Social