It is estimated that as many as 1,400 Indonesians have not used their rights to vote because of the large number of DPK (Daftar Pemilih Khusus) and only one hour to vote.

The direct election of the President and the Indonesian legislature for Indonesian citizens in Australia was held on Saturday, 13 April, four days earlier than in Indonesia.

According to the records of the Sydney PPLN (Overseas Election Committee) - which covers the area of New South Wales, Queensland and South Australia - voting is spread across 22 TPSLN (Foreign Voting Points) with 4 TPSLN located on the Consulate General in Sydney, 5 in Sydney Town Hall, 3 at Marrickville Community Center, 3 at Yagoona Community, 3 at Good Luck Plaza, 2 located at Sherwood State School-Brisbane and 2 others at the Adelaide State Library.

In general, the implementation process was reported to run smoothly, except for a number of issues that occurred in the Sydney area, especially those related to the number of voters that did not get the chance to vote.

However, there are a large number of voters with category Special Voters List (DPK), a list of Indonesian citizens who do not register beforehand or with incomplete or out of date information - after December 12 to take part in the election.

"So the total DPK voters until April that have registered have almost reached 2000," said Chairman of the Sydney PPLN Mr Heranudin when contacted by SBS Indonesian.

Mr Heranudin said that his part had conveyed information about the number of DPK voters to the KPU and asked about the allocation of ballots for them.

"Is there a ballot allocation?" said Mr. Heranudin. "It turned out that the KPU said there was no DPK. So we followed the rules."

Sydney Panwaslu Chairman Endi Dharma said that the day before the election was held, he conducted a video conference with the Central Panwaslu for the Asia Pacific region and discussed the anticipation of the last-minute explosion for DPK especially for TPS Town Hall, Marrickville and the Consulate General.

To the Indonesian SBS Mr Dharma said that the number of DPK found in the field was more than expected so that the window of one hour of election was not enough for all.

Mr Dharma said the committee try to solve this problem by accelerating the electoral process in the last one hour for DPK, especially for TPSLN Town Hall.

"Because of this DPK does not need data collection anymore through the system, he said." I emphasized to speed up the process. If previously one of our people counted two to three minutes. Now that might be just one minute.

"I think it's quite balanced that we did ... from PPLN and Panwaslu also helped the process."

Mr Dharma added that this chaos was also due to the mistakes of the prospective voters themselves.

"This is also a warning to the voters ... hoping this chaos will not happen again in the future, ie waiting on the last minute," he said. " those DPK were not registered at all.

When asked about the petition requesting extra election for the Sydney area, Mr Dharma said that so far no one had conveyed the petition directly to him, but the committee had considered that for this election.

"So the Panwaslu - Election Supervisory Committee has proposed to Bawaslu, the PPLN also submitted to the KPU," he said. "Together at that time. Apparently from the KPU there was a green sign. Today I seem to see this green sign."

"Just waiting for a signal from Bawaslu."

Mr Dharma added that Monday night the Panwaslu was back in coordination, looking for certainty whether there would be a follow-up extra election in Sydney for DPK that had not yet had time to vote. Read more of the story in Bahasa Indonesia page. 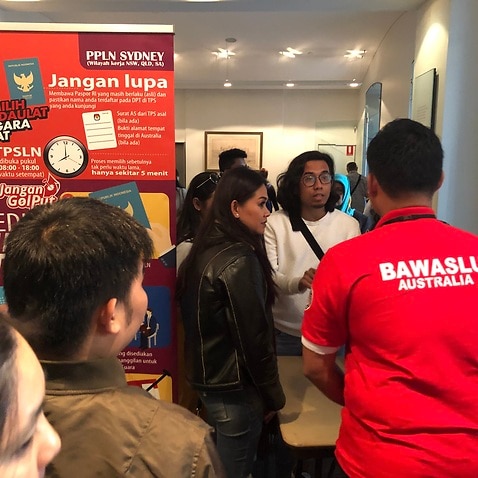