Fatma Abdi came to Australia more than 20 years ago. Her experiences in Kenya made her determined to offer opportunities to youngsters regardless of religion or culture. Now her football club, the Leopard Sports Club, is thriving with over 90 young members converging every weekend to play and be together.

Fatma Abdi, supported by her husband, who sometimes acts as a referee and coach, dreams of bringing young people together.

“Starting this club is to provide the generation what I missed and wished I had when I was growing up," she told SBS Dinka. Fatma Abdi, together with two of her children and two coaches.
Ajak Deng Chiengkou

"Personally, my story is long and rough, but I believe God gave me this strength to show compassion and provide opportunities for those who need it and as long as I can.”

The mother of eight says she decided to stand up for young people and counter negative stereotypes of the African community portrayed by some media.

"The Young Leopard Sports Club provides a sports outlet for kids age six onwards and we welcome all levels of talent that are interested in the sport.”

When I came to this beautiful country, I was faced with similar negative issues back from my home, from my community, and I decided to make a change and to show that as a woman, I can do it all.

Embracing all cultures and encouraging great sportsmanship is her mission, and that includes involving parents too.

"We bring parents to socialise with other parents from different cultural backgrounds to understand each other and learn about each other's cultures. We also aim to build teamwork, communication, and friendship amongst the youth from varying backgrounds."

At Tarneit Rise, where the kids gather every Saturday, parents who drop their children for a game can choose to stay. Most Muslim faith families can have the space to pray with their children when prayer times arrive. 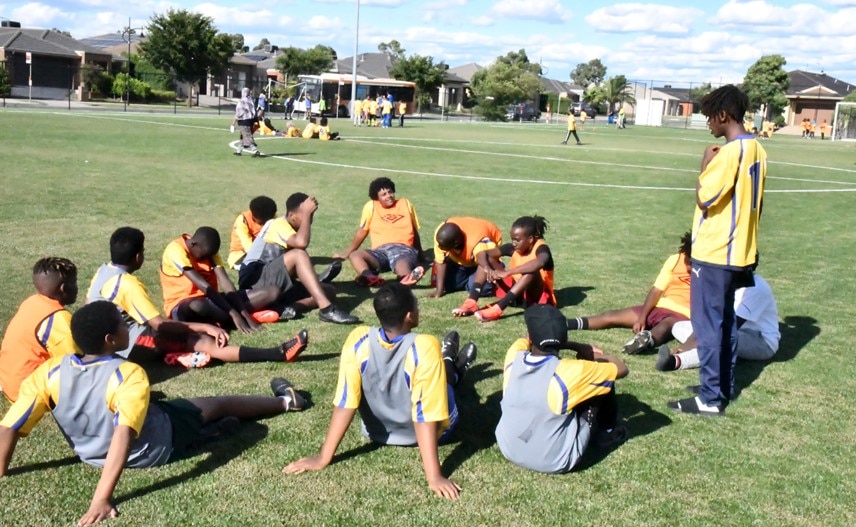 “Our club also encourages community members to work side by side to support our kids by building their confidence and at the same time providing an inclusive environment for disadvantaged kids," says Fatma.

"This is a young sports club. It's not about making money. Rather, it encourages the community physically and socially to look out for another.”

Parents contribute $35 a month per household for their kids to participate in the club.  But over the past eight years, Fatma and club members have been forced to move from one pitch to another because they have no permanent contract or funding for a long lease. There has, so far, also been no major financial support for the club.

Our club is growing, and we are struggling for a space for kids currently, we don’t have a changing room or toilet for our members.

"We have been moving from different venues such as parks, Victoria University, and now Tarneit Rise Primary School.” 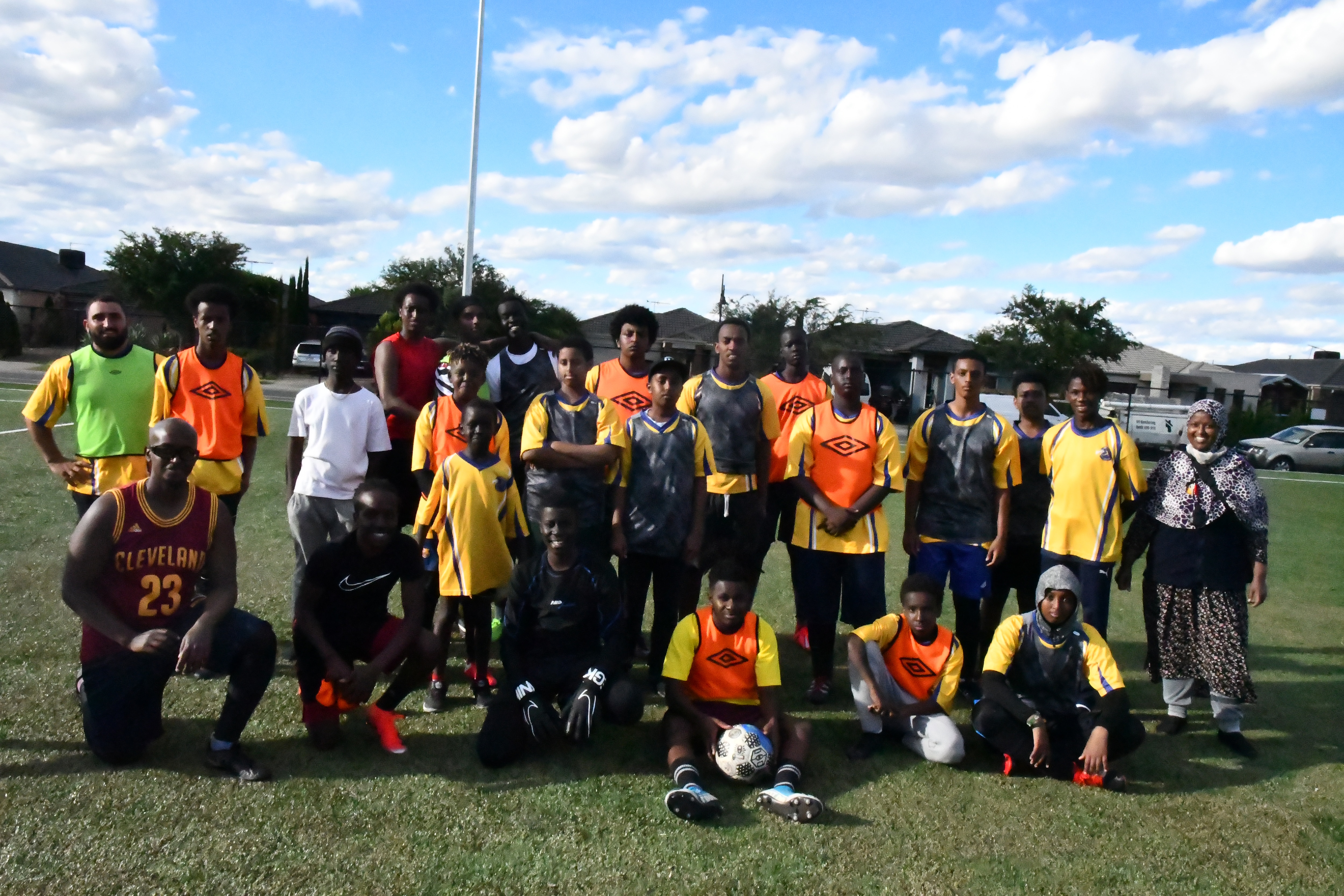 For years, Fatma and her husband struggled to find the financial support they needed to help all the children. They were paying everything from their own pockets until Wyndham City provided Tarneit Rise Primary School as a venue for weekend training.

“The venue of Tarneit Rise that we are now using is not permanent," Fatma says.

"We don’t pay anything to use the venue, but our training can be interrupted when other programs are ongoing. As for financial support, in 2020, we received a donation of $2000 from the Hon MP Sarah Connolly, the Labor Member of Parliament for Tarneit. We were able to buy equipment with that money.”

Fatma also adds that some assistance has also been provided by Chaffey Ward Councillor, Josh Gilligan, who also worked as the Mayor of Wyndham City Council in 2019/20. Sabrin Mohammed, aged 16, is Fatma Abdi's daughter, currently the only female playing on the soccer field with boys.

Being from a conservative Muslim family didn’t deter her from play with the boys.

With her hoody instead of hijab, it will take you a lot of time to notice Sabrin in the field.

“All of us are family and will take care of each other," Sabrin says. "I will tell other young people to come out because it’s very fun here and we are from different cultures and religions. All of us talk to each other we play together.”

John, also 16, has been part of the Leopard Sports Club for three years.

Confidence booster for many

“It’s a good program it helps the kids to enhance their skills, and it's a comfort confidence booster as well. It’s easier to work in class and later play with friends from school. This allows us to talk to each other on weekends.”

Seventeen-year-old Omar Ibrahim is an Ethiopian refugee who came to Australia in 2019 after living in Kenya as a refugee for five years.

He came to Australia with his mother and nine siblings after his father died.

“I attend language school Monday to Friday then come to this club on weekends. I see this place as the best friend to find people that I can play with and being mentored as well.”

Idris Zeleki, a young African from an Ethiopian background, started six years ago with the Leopard Club in Wyndham but now plays with Hoppers Soccer Club. Still, he is looking for other opportunities to play in another professional club. 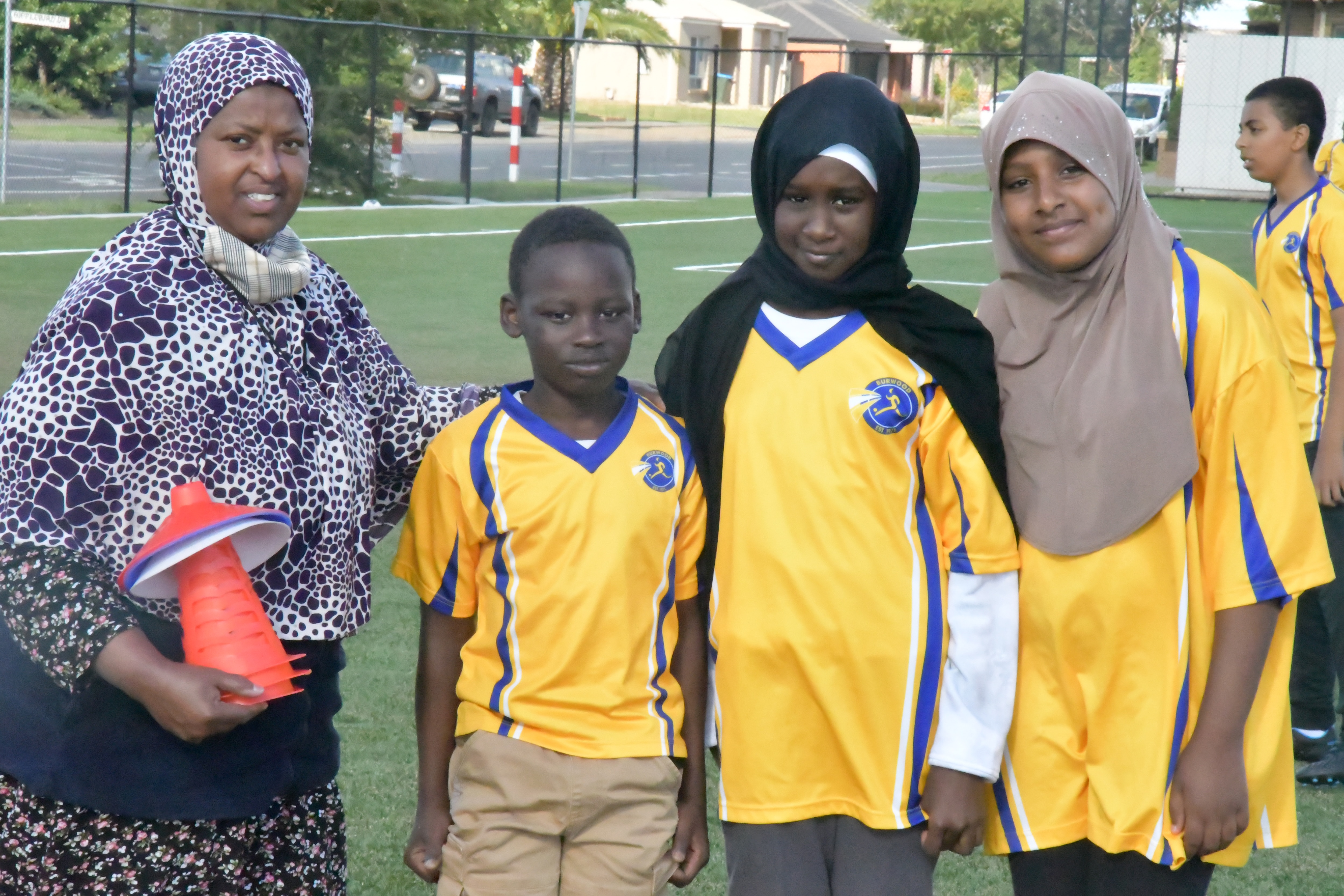 “I play for another club, but I started everything here. Being here and playing together create the connection between us as young people. I still come back to play and help the younger kids because this brings us together as a community.”

Farah Mohamad is one of the youngest sons of Fatma Abdi, and he runs the social media and videography for the Leopard Club. In most cases, Farah joins the youths at the field to play.

"That's the best way to support my mother to achieve her dream of helping others. Also, being close to the family helps us to avoid some of the bad things. If someone goes out from their families, then a lot of circumstances can affect them. Most of the time, you should stay with your family, and you cannot run away from them.” Saad is a Nigerian-Australia who is a goalkeeper
Ajak Deng Chiengkou
Saad was born in Nigeria then moved to Australia when he was just two years old.

Now a Year 10 student he's been with Leopard Sports Club for the last six years and often refers to Fatma as 'aunty'.

“This place lets one learn a lot about team building and working in a team environment. This gives us the support that we need, and the level of support is starting to increase now. As for diversity, I am the only Nigerian here, so it’s a bit different. Most of them can speak their language, and I don’t understand. So they can relate to each other more, but it doesn’t impact me that much."